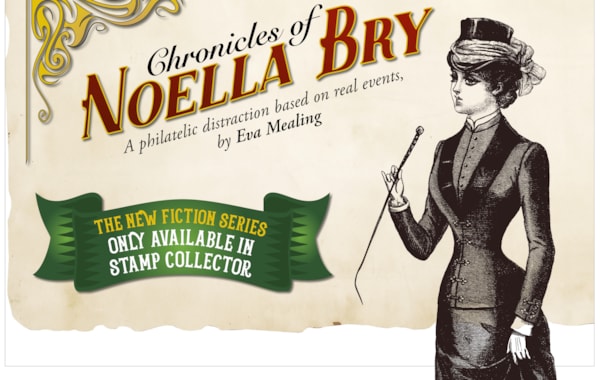 In the first chapter of this 'philatelic distraction based on real events', we meet budding reporter Elizabeth Connolly, whose life is about to change dramatically as she travels down to London…

Chapter One: The Curious Case of the London Gang

Part One - The Famous Globe Newspaper

Enjoy the first part of our popular philatelic fiction series here, and follow the story in every issue of Stamp Collector magazine.

It’s the 1890s, the Victorian era is in meticulous motion, and 22-year-old Elizabeth Connolly has left her home village of Escrick, just outside the medieval city of York, with the dream of becoming a writer for a big city newspaper.

She arrives at St Pancras Railway Station in London, on a murky and chilly December afternoon, clutching a solitary travel bag containing one change of clothes, a few personal items, and a reference signed by the industrial tycoon Sir Jacob Stuart Mills.

Elizabeth Connolly wastes no time, and heads immediately to the premises of the most prestigious newspaper in London, and there talks her way into the private office of George Armstrong, who is the highly acclaimed editor of the renowned Globe Newspaper. Established in 1803, the newspaper is owned by the British politician and peer, George Cubitt, First Baron of Ashcombe.

The Globe is without doubt the most successful periodical in the country, and Mr Armstrong, following a surprisingly brief interview with Miss Connolly, stuns his editorial staff by announcing that she is joining the newspaper as their first female writer.

But that’s only half the story.

Because, had Mr Armstrong divulged the entire details regarding her appointment, he would have compounded the widespread look of astonishment written upon the faces of his literary staff that afternoon. What Mr Armstrong withheld from the assemblage was that he had actually engaged Miss Connolly as a ‘Stunt Reporter’, and assigned her to investigate a criminal gang in London, promising her a three Guinea bonus for a ‘Turnover’ article of 1,200 words.

This seemingly spontaneous appointment was in actual fact a premeditated ambition of Armstrong’s, which was just waiting for the correct circumstance to become reality. Miss Connolly’s arrival that day had reminded Armstrong of the prominent American newspapers, in New York and Chicago, who had recruited female writers working undercover to investigate stories on social injustice and crime.

The Americans had christened these writers ‘stunt reporters’ since they operated using pseudonyms to protect their identity and employed covert tactics to uncover sensational ‘exposés’. As a result, the newspapers concerned had enjoyed unprecedented demand.

Armstrong, who was never slow to implement ideas that would increase his readership, was eager to emulate this journalistic innovation. When Miss Connolly walked into his office that afternoon, with a reference from a celebrated industrialist endorsing her writing talents, and then bashfully mentioned her passion for philately, Mr Armstrong believed that Providence herself had guided Miss Connolly to him directly.

You see, unbeknown to Miss Connolly, Mr Armstrong had for several weeks been wrestling with how his great newspaper would uncover the truth about an unsavoury tale concerning the forgery of collectable stamps; a story that required a clandestine approach few of his well versed but well known hacks could provide. This as yet unconfirmed story had come to his attention at his beloved Reform Club in Pall Mall. The distasteful revelations were presented to Armstrong by a fellow member, Judge Philbrick, and pertained to an organised gang who were deceiving London’s wealthy with fake philatelic material. The unsuspecting buyers, often prominent figures in society with a great deal more money than philatelic sense, were spending large sums on what amounted to worthless pieces of paper.

So, to Mr Armstrong’s instincts, Miss Connolly was quite literally heaven sent, having demonstrated to him all the qualities he sought for a stunt reporter; she was surely perfectly suited to uncover the truth about these stamp shenanigans.

It was too good an opportunity for the eminent editor to pass up. All that needed to complete the puzzle, in the mind of Armstrong, was what ‘pen-name’ Elizabeth Connolly would adopt, henceforth, to undertake her duties as an undercover reporter.

Mr Armstrong had in fact a name in mind, and having informed Miss Connolly her remuneration would be £1 a week, plus expenses and a publishing bonus, he announced with excitement, and a grin that underlined his voluminous walrus moustache, ‘Your nom de plume Miss Connolly shall be Noella Bry. Welcome to the Globe Newspaper. Go get me that story!’

And that was how Elizabeth Connolly, budding writer and stamp collector from a working class family in Yorkshire became Noella Bry, Stunt Reporter for the world famous Globe Newspaper, London.

Read further chapters of the fictional series in every issue of Stamp Collector magazine. Join today for just £3 for your first 3 issues.