The late Prince Philip has appeared on numerous stamps during his lifetime, especially during his 73 years as husband, companion and consort to The Queen, whose own portrait on stamps is one of the most reproduced images of all time.

Naturally the Royal Family have been honoured on stamps for many years, not just in their home nation but across the British Commonwealth, and Prince Philip's long service means there are hundreds of designs to collect.

Of course, the Duke of Edinburgh, who sadly died at the age of 99 on 9 April 2021, was used to taking a supportive role to his the Queen, and of course, Elizabeth II had appeared on many British stamps before her husband was also depicted on our postage.

By the time Prince Philip appeared on a British stamp, in 1972, figures such as William Shakespeare, Winston Churchill and Robert Burns had all appeared beside the familiar portrait of the Queen. Yet, the humble Duke would no doubt have been pleased and honoured with the pair of special stamps.

Issued to mark the royal couple's Silver Wedding Anniversary, the stamps featured a photograph of the pair facing left, Jeffery Matthews' simple design leaving the subtly smiling faces to tell the story of their loving partnership, as they joined forces to serve the public. 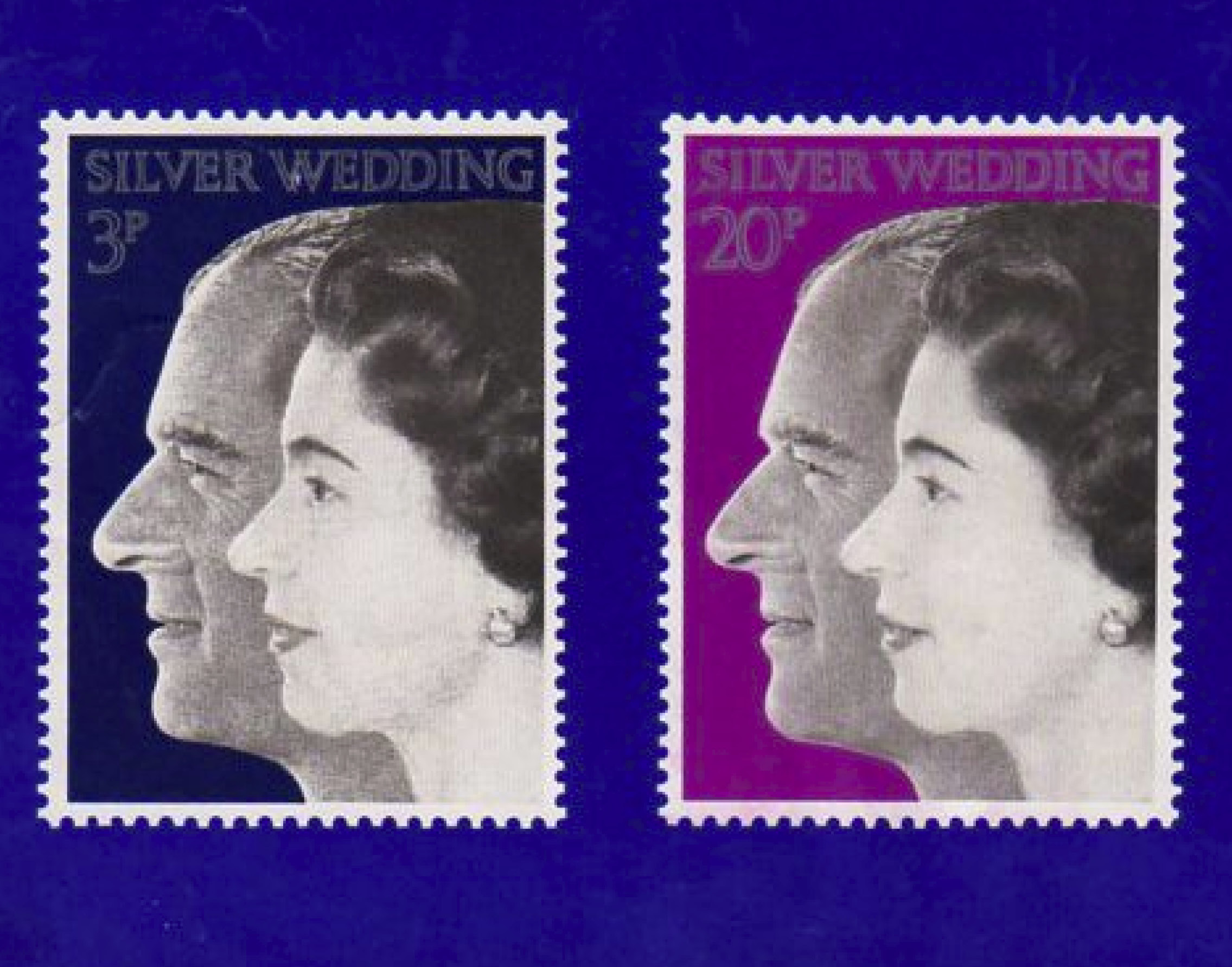 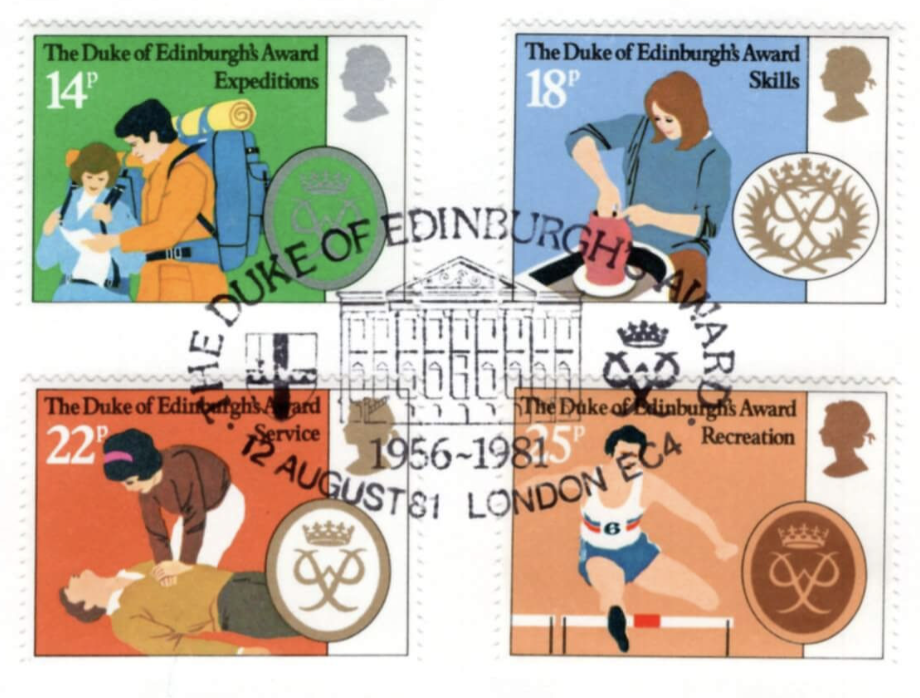 Prince Philip returned to British stamps 25 years later, on 13 November 1997, to celebrate the Golden Wedding Anniversary. The set of four stamps featured two photographs; a 1947 wedding photograph on the 20p and 43p values, and a 1997 photo of the couple on the 26p and 63p stamps. 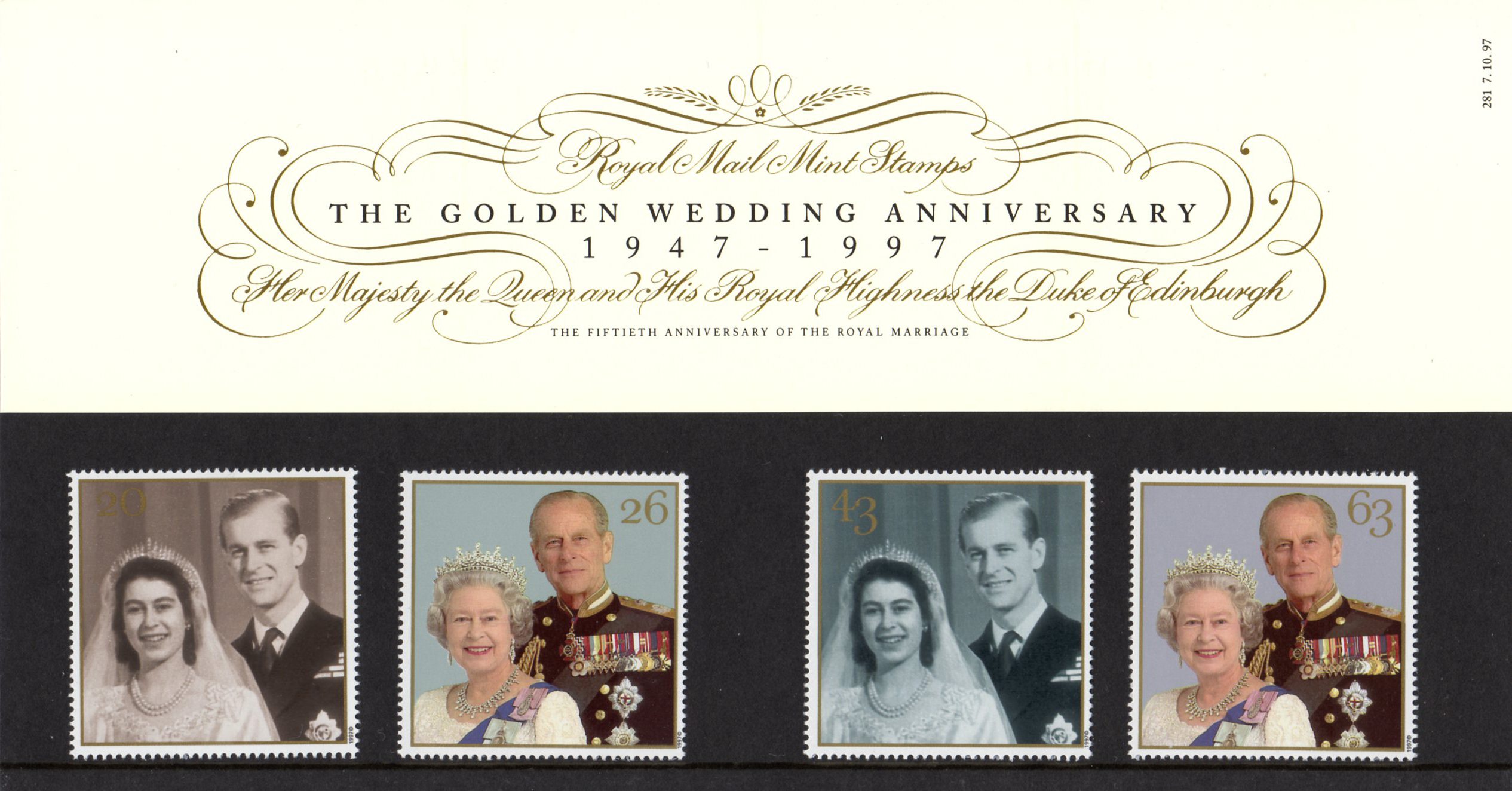 The 1997 set was due to be issued on 7 October but was delayed due to the death of Diana, Princess of Wales. A five-stamp set for Diana followed in February 1998.

The 2005 'Trooping the Colour' set included a £1.12 value featuring a photograph of Prince Philip, taken the previous year, in ceremonial costume in carriage beside the Queen. 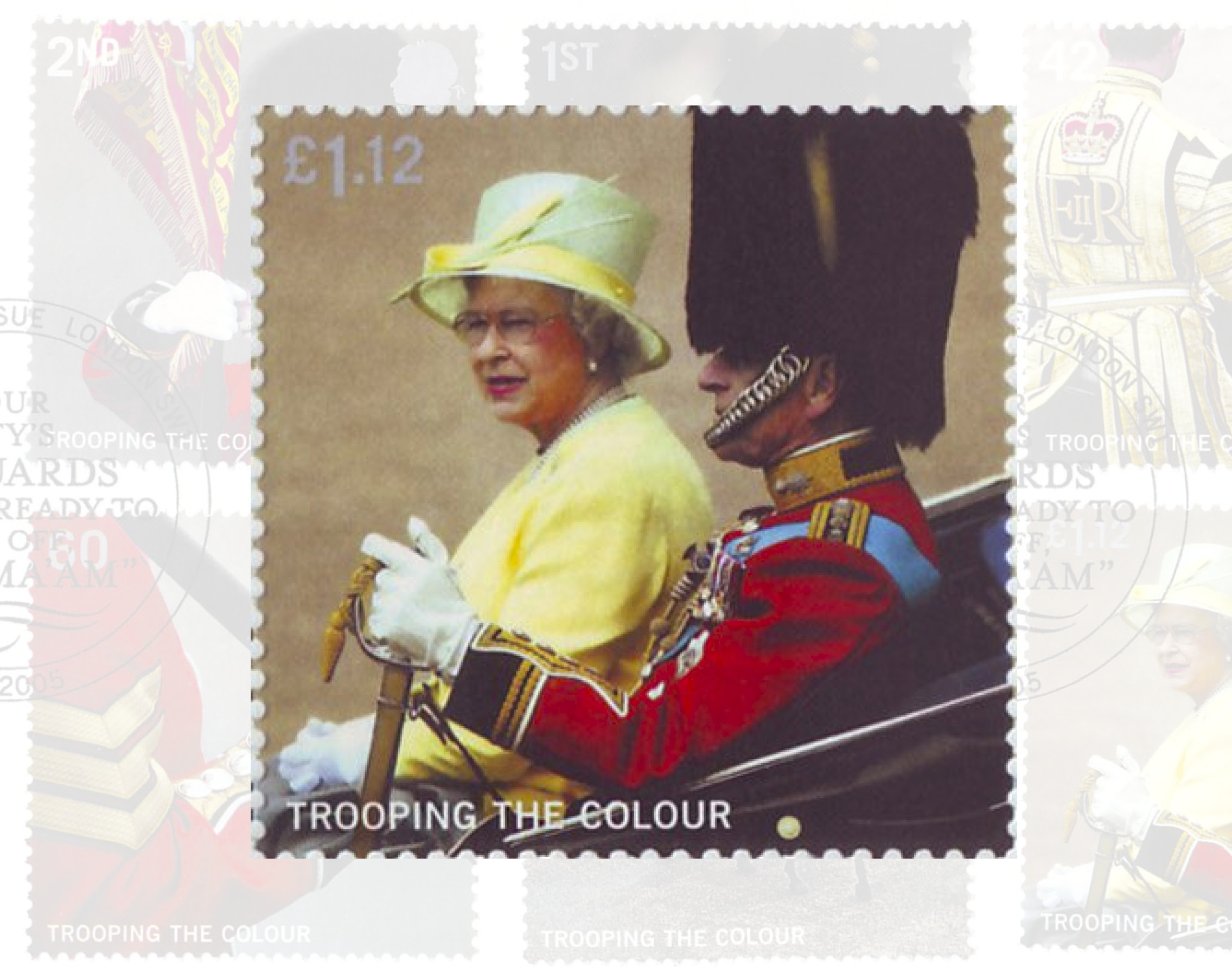 A year later, the Queen celebrated her 80th birthday, and a set of eight stamps featured black and white photographs giving a glimpse into the less formal life of the royals. The Queen and her loyal husband are seen on one of the 72p values, which reproduces a photograph from 1950. 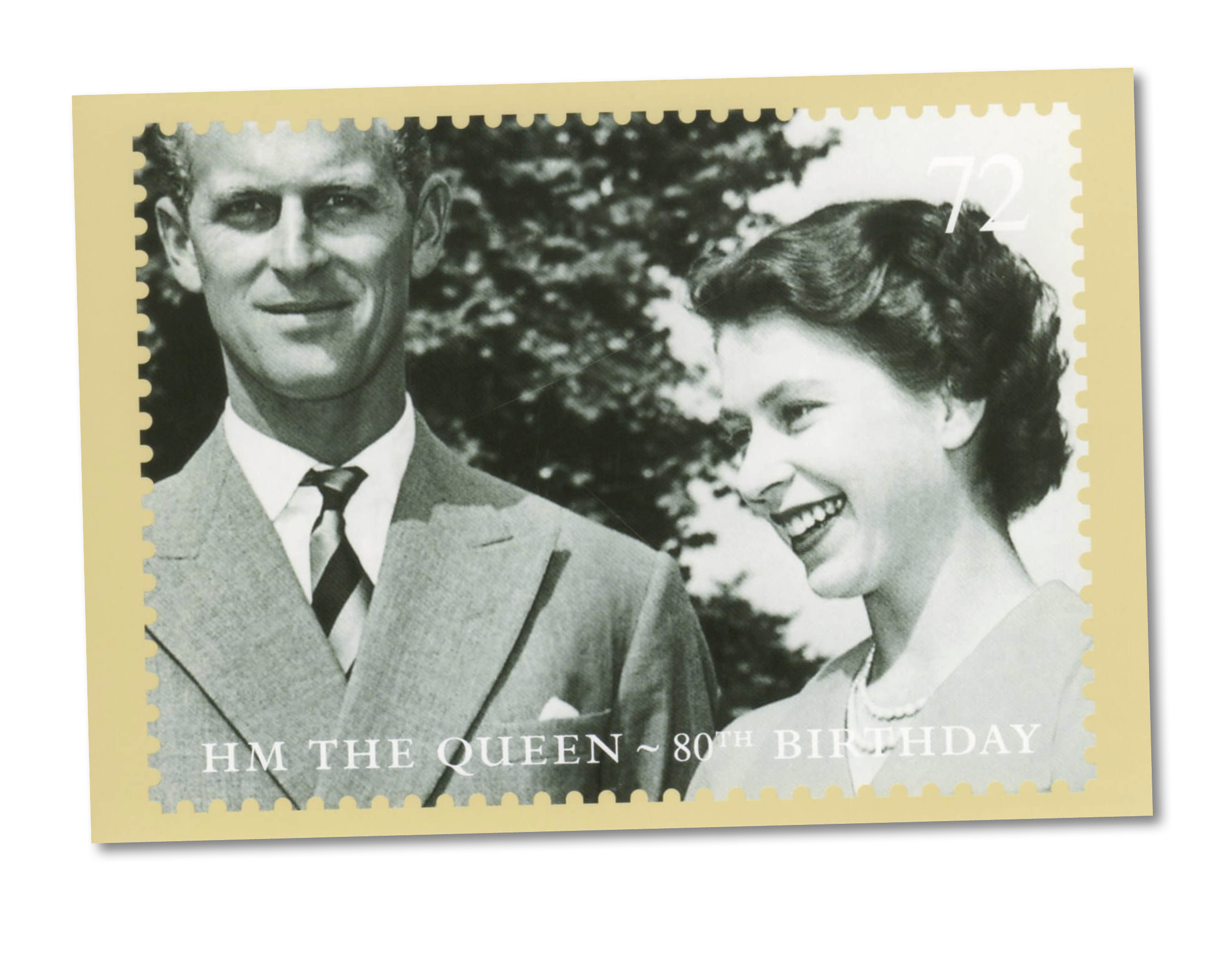 Issued to commemorate the Queen's 60th Wedding Anniversary on 16 October 2007, a ten-stamp set featured a range of photographs of the royal couple, including a four-stamp miniature sheet showing them enjoying family life. 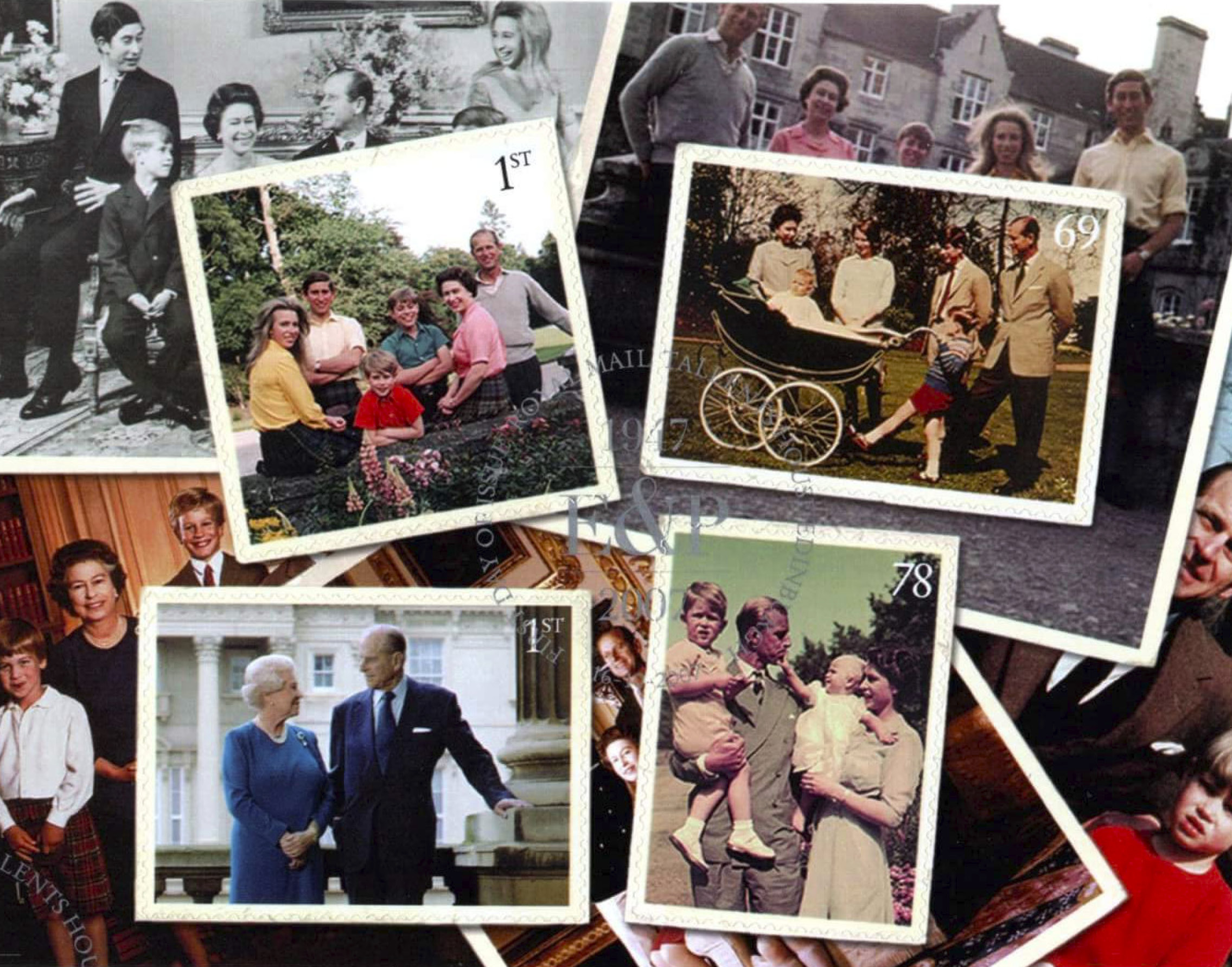 Whilst not a commemorative stamp set, Prince Philip's 90th birthday was celebrated by Royal Mail, in the form of a stamp sheet featuring ten 1st Class Union Flag stamps alongside photographs taken throughout his life.

Naturally, Philip is seen on the eight stamps marking the Queen's Diamond Jubilee, issued in May 2012. The stamps show the Queen at a range of events, and the appearance of the Duke of Edinburgh on two of the stamps, in his supportive role, reflects the nature of the couple's relationship, the Queen taking centre stage but her husband always by her side. 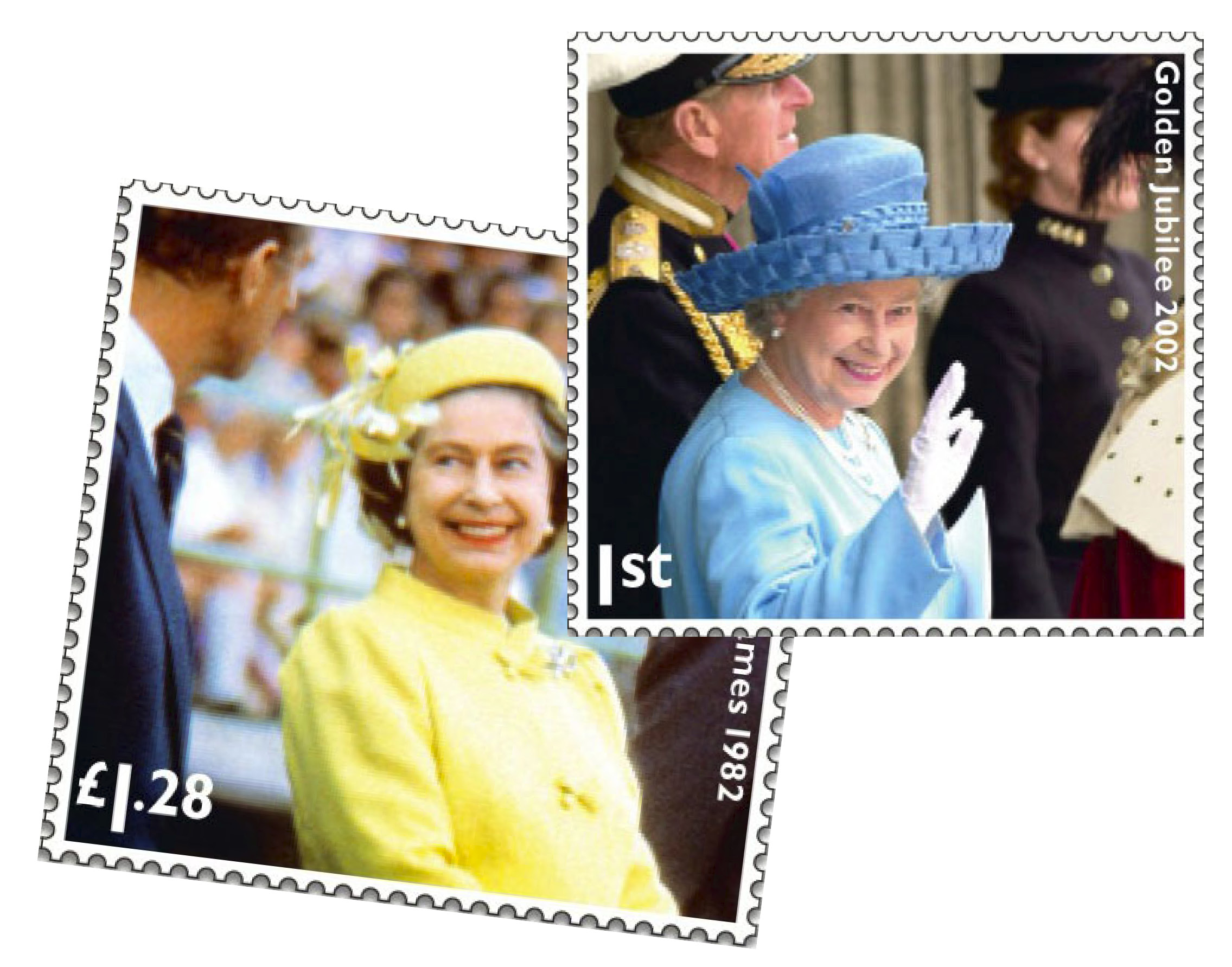 Similarly, Prince Philip is seen on one value from the April 2016 set marking the Queen's 90th birthday. 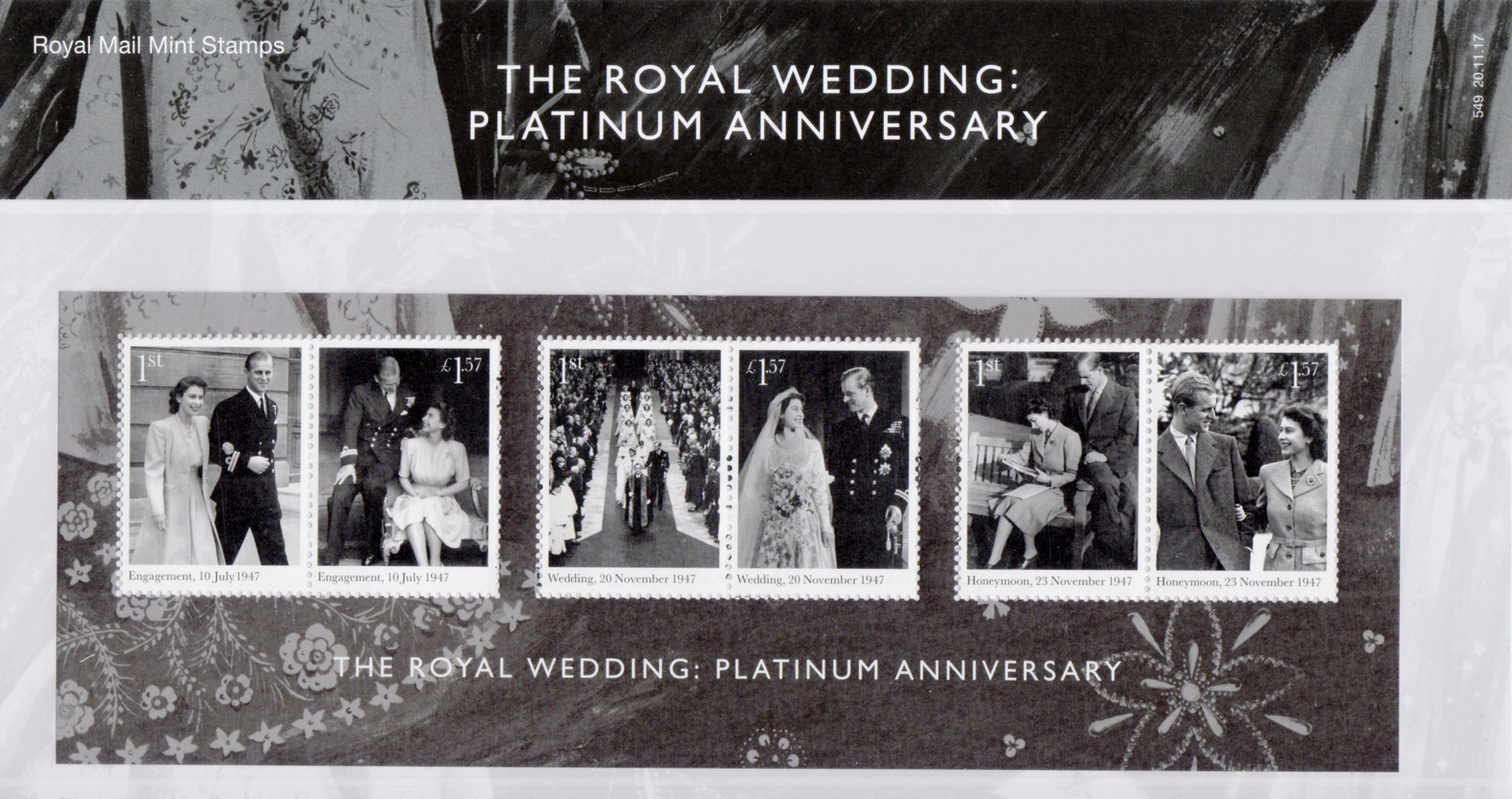 Just weeks before post offices across the world prepared to celebrate Prince Philip's 100th birthday, the Duke of Edinburgh passed away, on 9 April.

Buckingham Palace issued a statement reading: 'It is with deep sorrow that Her Majesty The Queen announces the death of her beloved husband. The Royal Family join with people around the world in mourning his loss.'

Meanwhile, Britain's Prime Minister Boris Johnson paid homage to the Duke of Edinburgh's 'extraordinary life', a life that has been celebrated on a collection of elegantly produced British stamps.

Further reading: A timeline of British stamps and monarchs

Before you embark on a stamp collection covering stamps from 1840 to date, a quick revision of our monarchs may be required. In this at-a-glance guide we provide a timeline of the British Kings and Queens to have ruled during the postage stamp era. Read guide