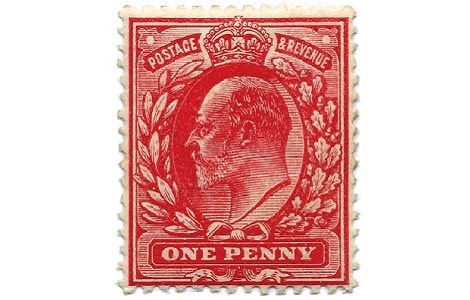 The stamp we hope to persuade you to add to your affordable GB stamps collection is a mint (or mint hinged) Edward VII Penny Red with good margins, and in well-cared-for condition.

The general public first saw it on sale, together with the near-identical halfpenny green, twopence-halfpenny ultramarine and sixpence pale dull purple on 1 January 1902, almost a year into the new reign.

Some satisfaction was also expressed on seeing that the Post Office had reverted to stamps of single colours; and that the monarch’s portrait, centrally set in an oval of laurel leaves symbolising Victory; and oak leaves signifying sovereignty; showed an honest likeness of the King, revealing his good humour, kindness and common-sense nature.

When buying your first Edward VII penny red, you will have questions of colour shade, watermark difference and overall condition buzzing through your mind.

Additionally, you have to be aware that two printers – De La Rue and Harrison & Sons – produced these stamps and subjected their sheets to different perforating gauges.

Don’t rush in with a three-figure purchase at the outset. Expect change from £10 when buying the first for your collection.

Neil Mantle of UK GB Stamps (www.ukgbstamps.co.uk) has identified at least 87 shades of the 1d across the printers and perforation varieties.

A rose-carmine lower marginal single with the ‘F 7’ control almost completely omitted, fine mint and ‘extremely rare being one of only two examples believed known’ was sold at Grosvenor for £1,250

A 1d ‘scarlet’ featuring a ‘Board of Education’ overprint sold for £55 recently on eBay.

Used examples can be picked up for less than £1. A block of six 1d reds in mint condition sold on eBay in January for £11.