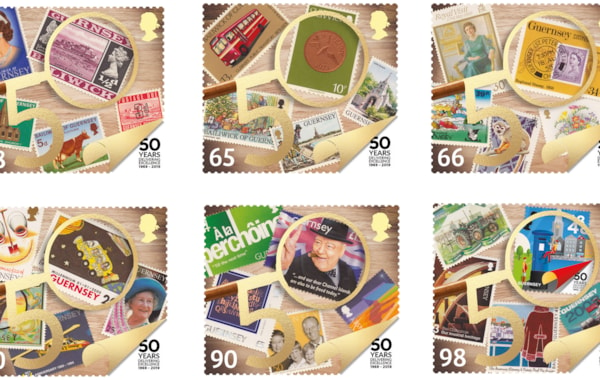 In celebration of fifty years of Postal Independence, Guernsey Post is issuing two commemorative stamp issues, the first in celebration of postal operations and the second showcasing a Guernsey stamp collector’s story, highlighting the rich variety of topics covered by the philatelic bureau since Guernsey became an independent postal administration on 1 October 1969.

The philatelic stamps are immediately eye-catching, shown from the perspective of a collector, they depict stamps from a private collection belonging to Guernseyman, Doric Sarre, who began collecting stamps when he was ten years old. Mr Sarre’s collection spans from 1969 to the present day; those featured on the stamps include one of the first independent Guernsey postage stamps, produced pre-decimalisation in 1969, which depicts Guernsey’s Castle Cornet, and a stamp of Winston Churchill, produced in 2005, to mark the sixtieth anniversary of Guernsey’s Liberation.

A magnifying glass has been cleverly incorporated into each stamp’s design and features a gold foil handle extending to a number 5, which, together with the gold foil circle of the magnifying glass, depicts the number 50 to mark the anniversary year. The stamps also utilise UV spot varnish and embossing print techniques to further enhance the look and produce a particularly striking set.

The second issue includes six stamps that illustrate some of the key developments in postal operations in the years following Guernsey’s postal independence. These developments include: painting the island’s pillar-boxes blue to complement Guernsey Post’s new branding and image in 1980; introducing postcodes in 1993 and the introduction of automated machinery in subsequent years.

Also taking focus in the stamps are the environmentally friendly electric delivery vehicles now in use on the Island, and the huge shift from traditional mail to parcels following the massive growth in online shopping. Finally, the last stamp in the set features the commercialisation of Guernsey Post in 2001, becoming an incorporation.

The stamps in the postal operations issue are printed with microtext adding another interesting layer to the colourful issue, which tells the story of key events in Guernsey Post’s history.