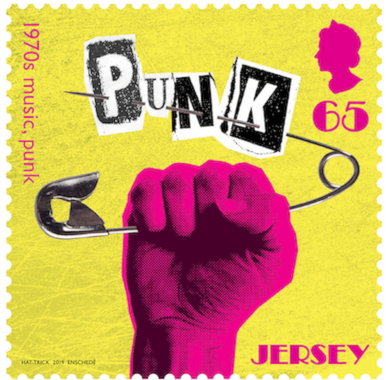 Popular culture of the 1970s is the subject of a set of six stamps and a Miniature Sheet issued by Jersey Post on 18 January 2019.

The third instalment in a five part series looking back at popular culture through the decades, this new stamp issue follows on from the 1950s and 1960s to explore different aspects of 1970s culture; namely language, music, fashion, events, food and leisure pursuits.

Once again, the concepts and designs have been created by Hat-Trick Design (London) Ltd, working with specially commissioned illustrators.

“This set of stamps is a real celebration of the seventies, not just in terms of the stamps’ subjects but also through the different illustrative styles and graphic interpretations,” comments Melanie Gouzinis, Head of Philatelic at Jersey Post. “In contrast to the psychedelic sixties, this was a decade characterised by brown, orange and green tones and this earthy colour palette is prevalent throughout the stamp designs.”

Find out more at www.jerseystamps.com

The 1970s was a decade of social, political and economic change. Society began to rebel against the commercial and materialistic ways of the 1960s and punk music became a voice for these anti-establishment sentiments. Elsewhere, flared trousers, fondue dinners and roller-discos were all the rage, whilst the technological breakthrough of home video recording meant that, for the first time, people could document their day to day lives through film.

In 1970s Jersey, a steady stream of tourists were enjoying beautiful beaches, exciting nightlife and excellent cuisine. Jersey Airport had become the sixth busiest airport in Europe and the finance sector boomed. “The Miniature Sheet accompanying the stamps has been created by famous fashion illustrator, Caroline Smith who also illustrated the flares for the 76p fashion stamp,” continues Melanie. “It features a colourful and vibrant representation of Jersey’s main shopping street using colours, styles and typical shop-fronts of the 1970s high street.”

A Souvenir Sheet, containing all six stamps has also been produced with the addition of a timeline, showing significant events of the 1970s including the year the first email was sent, the year of the first test tube baby and the year Margaret Thatcher became UK Prime Minister.

Jersey Post’s Popular Culture – The 1970s stamps are available to buy from all branches of Jersey Post.

Philatelic stamp products such as Miniature Sheets, Souvenir Sheetlets, First Day Covers and Presentation Packs will be available from the Jersey post offices at Broad Street, St Helier and Rue Des Pres, St Saviour on issue day and can be ordered now at www.jerseystamps.com
Alternatively, you can email the Jersey Philatelic Bureau at stamps@jerseypost.com or telephone us on: +44(0) 1534 616717.

Find out more at www.jerseystamps.com