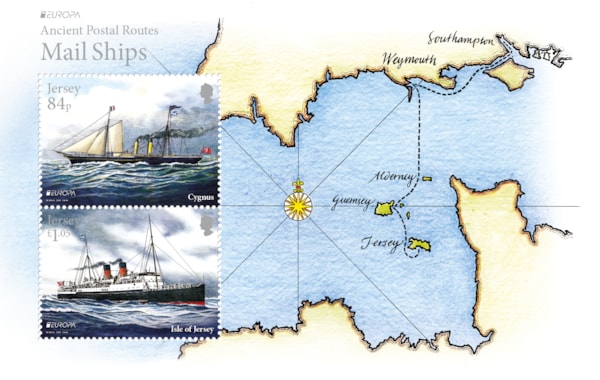 Europa stamps, bearing the official logo, are issued every year by the members of PostEurop, the trade association which represents the interests of European public postal operators.

Aiming to build awareness of the common roots, culture and history of Europe and its common goals, EUROPA stamps are eagerly sought after by collectors around the world. Each year a theme is set for members to interpret and illustrate on a set of stamps; in 2019 the theme Ancient Postal Routes has been selected for our interpretation.

The first mail ships set sail to and from Jersey in 1794 and since then, the Island has been serviced by dozens of mail ships and passenger boats. A variety of vessels that span Jersey’s mail ship history are depicted on this six stamp set, illustrated by Martin Mörck.

The 54p stamp depicts the Rover, a sailing cutter, which was built from oak at Bridport and was one of the first two ships to carry official mail between England and the Channel Islands in 1794. The Rover would take sixteen hours to cover the 85-mile journey, good weather permitting. Although the ship was privately hired, as a designated HM packet ship, the ship would have had the Merchant Navy ensign.

The South of England Steam Packet Company put the two-masted, wooden paddle steamer, Atalanta (70p stamp), on the Channel Islands run in 1836. The ship was 140 feet in length, had a 23 feet beam and weighed 400 tons. After ten years, the Atalanta became part of the new South Western SN Company and started carrying Royal Mail to the Channel Islands in 1846.

The Cygnus (84p) was an iron paddle steamer, built by Henderson and Sons of Renfrew. The ship was 182 feet in length and had a breadth of 20 feet. The ship, which was operated by the Weymouth and Channel Islands Steam Packet Company, had two funnels and a clipper bow. The Cygnus’ maiden voyage to Jersey took place in 1857.

The 88p stamp shows the Lydia, a steel twin screw steamer, which was brought into service by the London Southwestern Railway and quickly claimed the record for the fastest run to the Channel Islands at 19.55 knots.

The Isle of Jersey (£1.05) made her maiden voyage to Jersey in 1930 where several hundred people gathered at the Albert Pier to welcome the ship. Finally, the £1.18 stamp shows Caesarea (III), built in Cowes on the Isle of Wight. She was launched by Lady Coutanche, the wife of the then Bailiff of Jersey, in January 1960. The vessel was 322 feet long, was 51 feet in the beam and had five decks. She sailed her last Channel Islands run in April 1978.