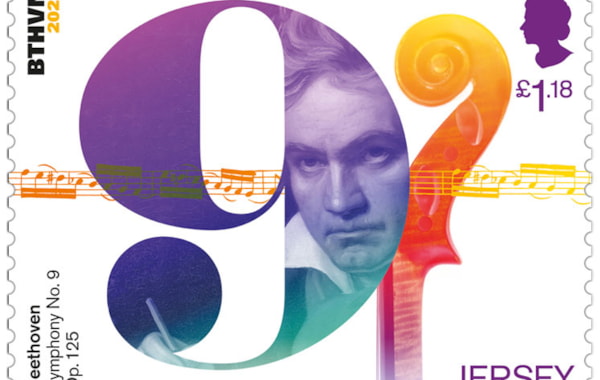 Jersey celebrates its connection with Beethoven on the 250th anniversary of his birth, with stamps inspired by the music of the Jersey Symphony Orchestra.

In 2020, the world will celebrate 250 years of the music of Ludwig van Beethoven. Beethoven was a predominant figure in the transitional period between the classical and romantic musical eras. Both Guernsey and Jersey have released stamps in celebration of this landmark anniversary, with the two islands taking different approaches to the topic.

The birth of a genius

Beethoven was born in December 1770, in the city of Bonn. His father was a court singer who taught Beethoven how to play the Clavier and Violin from a young age. With the addition of musical lessons from organists in his hometown, Beethoven was ready to perform his first public recital at the age of seven (although this was billed as “little son of 6 years”).

In 1781, Beethoven withdrew from school, with which he struggled, to study music on a full-time basis with Christian Gottlob Neefe, the then newly appointed Court Organist. At the age of twelve, Beethoven produced his first composition and went on to create many other masterpieces throughout his life, many that are still performed by orchestras around the world today.

Jersey’s Beethoven connections come from the world-famous Jersey Symphony Orchestra, who have performed a number of his works over the years. Taking a contemporary approach, the six stamps represent a selection of some of Beethoven’s most famous compositions, with the stamps incorporating some of the musical notes from the piece, a key instrument in the composition and a portrait of Beethoven himself.