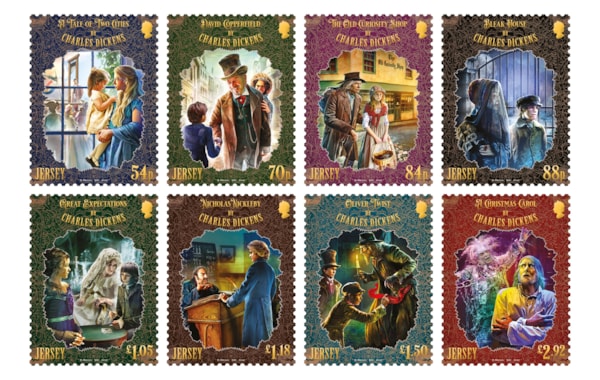 This year marks 150 years since the death of Charles Dickens (1812-1870), widely regarded as the greatest author of the Victorian era, and Jersey have marked the anniversary with a set of stamps celebrating his popular novels.

Appreciated for his vast contribution to English literature, Dickens is particularly well known for his powerful and evocative descriptions of Victorian London.

Many of Dickens’ novels carry social commentary, exploring themes of poverty and social tension and often taking real people and circumstances, including Dickens’ own, as their inspiration. Unlike other authors of the Victorian era, Dickens’ work appealed to the lower and upper classes, allowing him to enjoy a universal popularity that was rare for authors of the time.

Dickens was born in Portsmouth, Hampshire in 1812 and died in 1870. During his lifetime he wrote a large number of novels, penned travel books, edited weekly periodicals and administered charitable organisations. He had a love for theatre and a passion for acting. In 1851, he performed on stage before Queen Victoria.

Today, the work of Charles Dickens continues to be studied in schools and universities the world over with many of his novels being adapted for stage and screen. In Jersey, a production of A Christmas Carol was performed at the Jersey Arts Centre in December 2019, whilst local secondary school, Les Quennevais, presented their version of Oliver Twist at the Jersey Opera House in January of the same year.

This stamp issue commemorates the life of Charles Dickens with a celebration of some of his best-loved works. The stamps portray key scenes and characters from eight of his novels, as follows: 54p - A Tale of Two Cities; 70p - David Copperfield; 84p: The Old Curiosity Shop; 88p, Bleak House; £1.05 - Great Expectations, £1.18 - Nicholas Nickleby; £1.50 - Oliver Twist; £2.92 - A Christmas Carol.