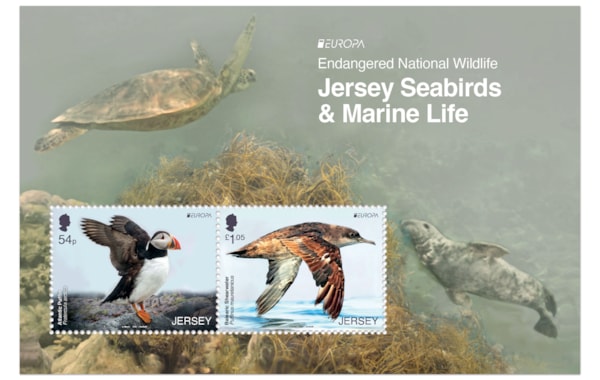 Jersey seabirds and marine life are the subject of a set of six stamps and a souvenir coin. The stamps are part of the 2021 Europa stamp issue, Endangered National Wildlife and have been illustrated by national science illustrator Sara Menon, with two stamps in the set featuring the Europa logo.

Each year, European postal administrations are given a stamp issue title to interpret and illustrate by PostEurop, the trade association that has been representing European postal operators since 1993. The aim of the joint stamp issue is to build awareness of each other’s culture and history, with Europa stamps eagerly sought by collectors around the world. Endangered National Wildlife is the title for 2021.

An island with a mild climate and varied coastline, Jersey is both a home and a resting point for a multitude of birds and sea creatures. Featured on the six stamps are: the Atlantic puffin, the loggerhead turtle, the orca, the bottlenose dolphin, the Balearic shearwater and the grey seal, all of which have been spotted in the waters and around the coastal areas of Jersey. The two Europa stamps featuring the Atlantic puffin and the Balearic shearwater have also been presented together in a souvenir miniature sheet.

Award-winning artist Sara Menon lives and works in Aquileia in Italy. She started work as a natural science illustrator in 2002 and today continues to do a lot of work with scientific publications and museums. Sara works in watercolour, pen and ink, pencils and other traditional media. Her work is characterised by very fine details, with hyper-realism being her strong point. In addition to the forthcoming Endangered National Wildlife stamps, Sara created the designs for Jersey Post’s 2017 stamp issue, Durrell & Darwin.

To accompany the stamp issue, Jersey Post has produced fifty strictly limited edition souvenir coins. The face of the coin features an Atlantic puffin, whilst the reverse features an image of Jersey, with an ‘X’ indicating where on the Island the puffins can be sighted. The silver-plated coin will be presented in an oak presentation box with a numbered certificate of authentication.