Man on the Moon 50th Anniversary – a 1969 Jersey perspective 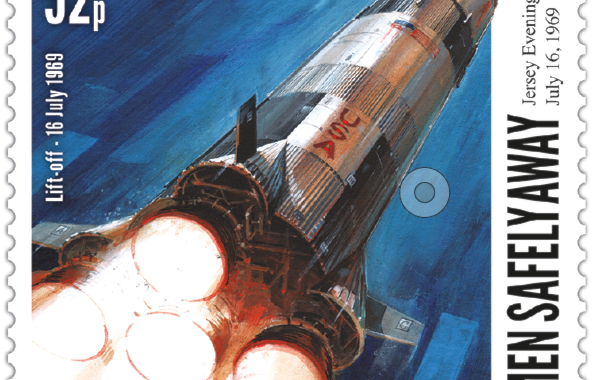 The Moon landing of summer 1969 is viewed from a Jersey perspective with six new stamps and a miniature sheet.

The Apollo 11 lunar mission took place between 16 and 24 July 1969 and is remembered as one of the world’s most significant historical events, one of those rare events where people can remember exactly where they were when they heard the news.

The mission was a globally viewed event, culminating in man’s first landing on the surface of the Moon on 20 July, watched on television by an audience of over half a billion people worldwide, including on the island of Jersey, where people gathered around televisions to watch Neil Armstrong take his first step on the Moon and the local newspaper, the Jersey Evening Post(JEP), reported the events.

Six stamps and a Miniature Sheet depict key parts of the Apollo 11 lunar mission together with a JEP headline or quote from an article of the time to illustrate how it was reported from a local perspective. The dates of the JEP report and actual event differ slightly in places, due to time differences and newspaper publication dates.

The stamps are illustrated by acclaimed aviation illustrator Keith Burns, with newspaper headlines and quotes being provided by the current editor of the Jersey Evening Post, Andy Sibcy.

The first stamp, a 52p value is titled Lift Off: 16 July 1969 and shows the launch of Appollo 11. Next we move to touchdown (20 July) with a 67p stamp showing the Eagle landing module’s touchdown.

The third stamp, Columbia Lunar orbit, 19 to 22 July, follows a JEP article on the Command ship orbiting the moon before rendezvousing with the Eaglefollowing its ascent from the surface.Jersey Evening Post readers read this historic headline ‘Giant leap for mankind’ shown on the 85p Moonwalk stamp showing the historic moment on 21 July when Neil Armstrong became the first human to set foot on the moon.

Finally, the 99p value shows the ‘blast off from tranquility’ as the Eagle left its lander base to return to Lunar orbit, followed by a final £1.15 Splashdown value as re-entry procedures finished with the three astronauts from the mission splashing down in the Pacific Ocean before a helicopter recovery.

The miniature sheet has the Jersey Evening Post headline Moon Rocks like Jersey rocks from 26 July, when readers were told of the apparent geological similarity between the moon and the rocks of the island of Jersey.

Get your free collecting space stamps checklist when you sign up to our free newsletter.