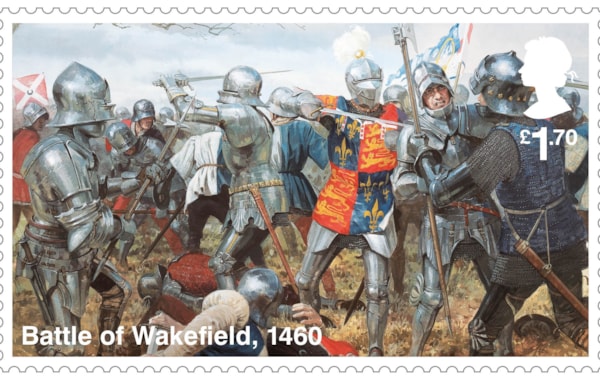 Royal Mail has revealed a set of eight stamps being issued to mark the 550th anniversary of the Battle of Tewkesbury, one of the defining battles of the Wars of the Roses.

The stamps feature illustrations by Graham Turner, a leading medieval and military artist, and re-imagine eight key battles across the years of the Wars. Royal Mail also worked with writer, historian and researcher, Dr David Grummitt on the stamp issue.

‘The Wars of the Roses fascinated both Shakespeare and historians alike. These striking illustrations bring to life a period of British history that was steeped in drama, betrayal and a quest for power that still enthrals today.’

The Wars of the Roses were fought between the two rival cadet branches of the royal House of Plantagenet: the House of Lancaster and the House of York, and were named – many years later – after the supposed emblems of the contending parties: the white rose of York and the red rose of Lancaster.