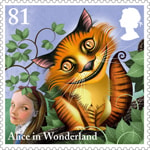 In 2015 Royal Mail marked the 150th anniversary of the publication of Alice’s Adventures in Wonderland, a story written for a young girl which became one of the most popular children’s books ever, being translated into almost 100 languages and never going out of print since its first publication.

The eight stamps, which were art-directed by Godfrey Design, feature illustrations by artist Grahame Baker-Smith who won the prestigious Kate Greenaway Medal for ‘distinguished illustration in a book for children’, for his picture book FArTHER.

The stamps are presented in an unusual vertical se-tenant format, which suits the ‘topsy turvy’ nature of the fantasy world that Lewis Carroll created.