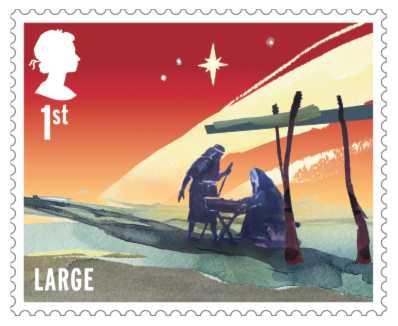 It’s a story we’ve heard so many times – recounted to us through the words of numerous Christmas carols and the Nativity plays we took part in at school and then perhaps watched our own children perform.

In keeping with the established tradition of issuing religious-themed Christmas stamps every other year, Royal Mail has called upon the services of London-born artist David Cecil Holmes, who designed one of the London 2012 Olympic stamps; and Studio David Hillman, which created thirty Olympic and Paralympic stamps for Royal Mail.

Depicting the Nativity story in a unique way is a challenge faced by Royal Mail each time the religious Christmas stamps are issued  – the cast of characters in the Nativity will always remain the same; Mary and Joseph, baby Jesus, the shepherds and the three wise men.

The last religious Christmas stamps, in 2013, focused simply on Mary, the mother of Jesus, but this year it’s back to the Nativity story, told through six stamps which use rich colours and simple silhouette imagery to show the journey from a carpenter’s house in Bethlehem through to the announcement of the birth of a king by a ‘celestial host’, as witnessed by a group of incredulous shepherds.