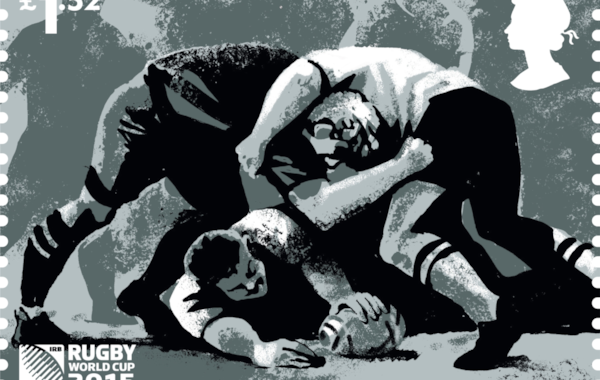 Find out more about Royal Mail's Rugby World Cup stamps, issued to coincide with the tournament hosted by England

England welcomed the world to the home of rugby as it hosted the 2015 Rugby World Cup, a global sporting event which Royal Mail marked in style with eight stamps from Royal Mail.

Each of the eight 1st class mint stamps features a familiar part of the game of Rugby Union and illustrator Geoff Appleton chose angles which would convey the ‘physicality, excitement and skill’ of the game, effectively placing the viewer at the heart of the action.

Unusual angles and compositions have been designed to make the action seem to be actually taking place – with scenes inside the scrum, watching a ball as it flies over the post, and observing a pass being made to a player behind. The eight key moves featured are tackle, scrum, try, conversion, pass, drop goal, ruck and line-out.