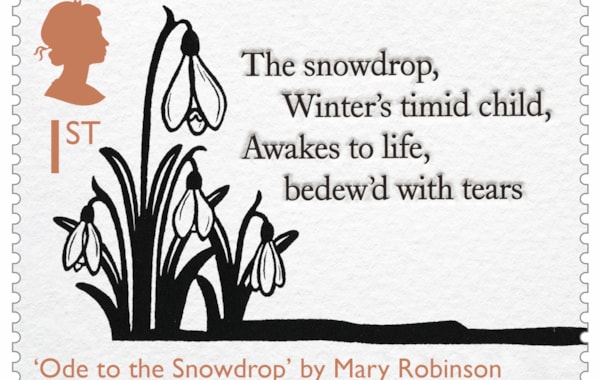 On the anniversary of William Wordsworth’s birth – he was born on 7 April 1770, exactly 250 years to the day of the stamp issue – Royal Mail celebrate the renowned poet and Romantic poetry with a set of ten stamps.

William Wordsworth is regarded as having launched the ‘Romantic era’ of British poetry, was Poet Laureate and remains one of the UK’s most popular poets. The Romantic era included poetry by Wordsworth, ST Coleridge, Keats and Shelley among others, and it is period of creativity that is celebrated across the ten stamps.

The stamps, each with a 1st class denomination, feature stark but effective artwork, a simple line from a poem, the name of the work and the name of the poet. It’s a simple approach that works very well and lends the set a consistent, measured feel.

The poets featured on the stamps

The first poet featured in the set is Northamptonshire-born John Clare, the son of a farm worker, who dedicated much of his work to the English countryside, often using his platform to comment on the destruction of our natural resources amidst the dust and grime of the Industrial Revolution.

Samuel Taylor Coleridge’s ‘Frost at Midnight’, written in February 1798, is featured on the second of the stamps and again touches upon the theme of nature and the countryside, as the poet reflects on his own childhood and the hope that his own son will be brought up in the country.

The next poem ‘Augeries of Innocence’ is by William Blake and the design shows a simple coastal scene, alongside the lines ‘To see a world in a grain of sand, And a Heaven in a wild flower’. Blake was not only a poet but a painter and engraver, and has been described by many as a visionary.

The work of Walter Scott has been celebrated on British stamps before, as part of the ‘Literary Anniversaries’ set of 1971. Here we recall ‘The Lady of the Lake’, Scott’s narrative poem of 1810, which was hugely influential in the Highland Revival, as romanticised tales of Scottish clans and battles became increasingly popular and the country began to explore its history.

Perhaps the three most famous poets of the period are all featured in the stamp set. The friendship between Shelley and Byron is well known, although their apparent unruly and even cruel behaviour has been less well publicised.

We see Byron in a more caring mood on his stamp, with the beautiful ‘She Walks In Beauty’, a poem that is much shorter than some of the rebellious poets other works.

Shelley’s philatelic appearance recalls ‘To a Skylark’, a 21 stanza poem which was inspired by walk in the Italian countryside with his wife Mary Shelley, and describes the appearance and song of a skylark they saw flying above them.

For William Wordsworth, Royal Mail have opted for ‘The Rainbow’, a short ode to the natural phenomenon which sees Wordsworth marvel at the striking colours in the sky: ‘My heart leaps up when I behold, A rainbow in the sky.’

Mary Darby Robinson’s ‘Ode to the Snowdrop’ is similar in sentiment to Wordsworth’s poem, this time paying homage to the beauty and vulnerability of the winter flower. A celebrity of her day, Robinson was also an actress and novelist, and wrote a number of feminist essays in her later years.

John Keats’ ‘Ode on a Grecian Urn’ was initially published anonymously and formed part of a series of ‘odes’. Dedicated to describing the beauty of classical Greek art, the poem initially received a mixed reception but has come to be known as one of the poet’s finest works.

Finally we have the simple but poignant line from Letitia Elizabeth Landon’s ‘The Fate of Adelaide’. Often known simply by her initials, LEL, the poet’s anonymity caused much curiosity and comment, with her audience eager to read the mysterious poet’s latest work in the Literary Gazette.

In addition to the usual selection of first day covers, stamp postcards and presentation pack, Royal Mail have also issued a coin cover featuring a £5 Wordsworth coin. The cover is available with a Brilliant Uncirculated £5 coin (priced at £19.95 and limited to 10,000 copies), or a Silver version of the coin, limited to 750 copies and priced at £85.

Don't miss our regular competitions, sponsored by Royal Mail, giving you the chance to win the latest special stamps.
Enter the competitions right now and don't forget to sign up to the free newsletter to keep updated.