Four Irish stamps issued to celebrate the fiftieth anniversary of the Apollo 11 Moon Landings feature a small spelling error, according to reports

A giant leap for mankind but, according to the Irish Independent newspaper, a small spelling error for stamp collectors. 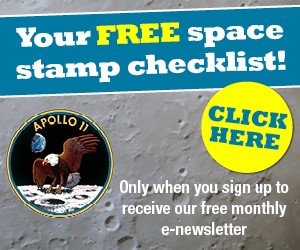 Speaking about being honoured on an Irish stamp and citing her own heroes, Cady said this recognition is 'Important for other people, particularly women and people of colour, who can see me on a stamp and think that they too could be this person. Katherine Johnson, Bessie Coleman and Sally Ride were pioneers of flight and of space exploration.'

A statement from An Post, as detailed by the Independent website, stated: 'An Post apologies for the error and has taken steps to ensure that this will not happen again. We hope this will not detract from a wonderful celebration of an epic event.'

The €1 stamps designed by Detail Design Studio are valid for postage within the island of Ireland and available in selected post offices, online at irishstamps.ie or by phone at (353 1) 705 7400.