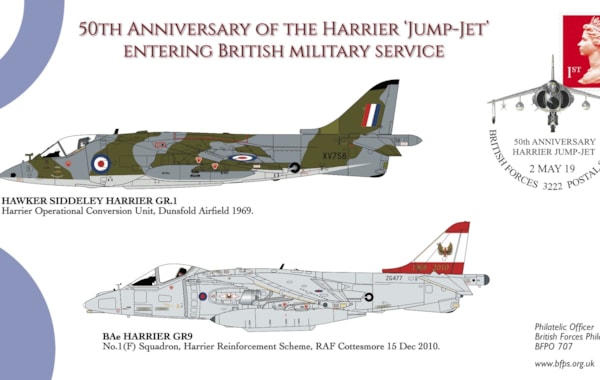 To commemorate the Hawker Siddeley Harrier GR.1 entering service and to celebrate the aircraft’s achievements, the British Forces Philatelic Service has published a commemorative cover.

The new cover features images of the first and last variants of the aircraft in service with the British military (Airfix images were kindly supplied by Hornby Hobbies Ltd).

A 1st class stamp is cancelled by the unique BFPS 3222 special handstamp, the centre of which displays a striking silhouette of the Harrier Jump-Jet. Besides the standard unsigned version there will be a numbered limited edition of fifty covers signed by former RAF and Royal Navy pilot David Morgan who flew Harriers during the Falklands War. The covers will have an A4 information insert and both will be presented in a protective cellophane slip.

The Hawker Siddeley Harrier GR.1 entered Royal Air Force service in 1969. It had evolved directly from the Hawker P.1127 and the subsequent Kestrel F.G.A.1 prototype aircraft. Over the next forty years, successive Harrier developments saw the aircraft mature into a highly effective combat aircraft for both the RAF and Royal Navy.

During its time with the Armed Forces the Harrier saw action in the Falklands War, Bosnia, Iraq, and Afghanistan. The last Harrier type in service was the BAe Harrier GR9.

Costing £7.50 and £15, for the standard and signed versions respectively, the covers can be ordered from the BFPS online shop or by post by sending a cheque (payable to ‘BFPS CIC’) to BFPS, The Old Post Office, Links Place, Elie, LEVEN, KY9 1AX.