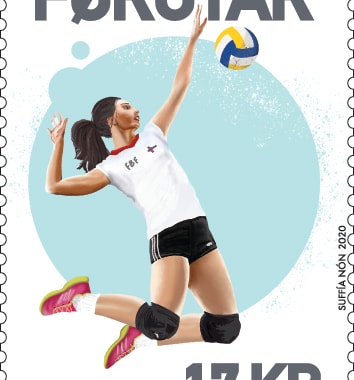 Volleyball in the Faroes

Volleyball is not an old sport in the Faroe Islands. Martin Holm was a teacher at the Faroe Islands Teachers’ College and a true pioneer in Faroese sports. He once brought a strange ball and a net to one of his sport classes. This happened in the Fifties and at that time, no one had ever heard about volleyball in the Faroes.

The two stamps drawn by Suffia Nón show two different situations in volleyball. One shows a libero throwing himself after a ball. A libero plays in receiving and defense at the back of the field. Libero always plays with a different colour on the blouse than his team players.

On the second stamp, a player hangs in the air ready to smash. The body is like a tense feather, to put so much force into the smash as possible.