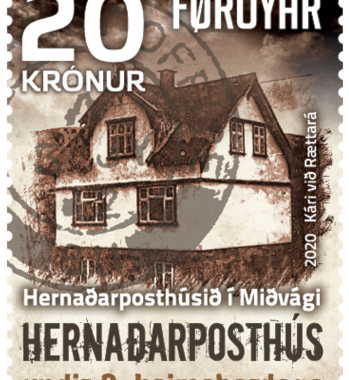 The latest stamps from the Faroe Islands look back on two field post offices used by the British on the Islands during the Second World War.

After German forces invaded and occupied Denmark on 9 April 1940, writes Brian Hague, Britain acted quickly to secure Denmark’s territories in the North Atlantic by sending forces to Iceland and the Faroe Islands… By the end of May the Marines had returned to Britain having been replaced by a more substantial Army unit, some 500 Lovat Scouts, a Territorial Army regiment from the Highlands and Islands region of Scotland. Pretty soon afterwards other Army units were also being deployed to the islands.

So even just a few weeks into the establishment of the British Garrison on the Faroes, which included a small Royal Naval detachment of approximately 175 men, there were a significant number of troops there and it was necessary to ensure the smooth and timely transmission of mail to and from them… Records reveal that on 3 May 1940 Field Post Office (FPO) number 219 was allocated to Army Post Office (APO) number 400 for use in the Faroes.

At its peak the British Garrison in the Faroes totalled some 7,000 personnel… Construction work began on an airfield in 1942, consequently a further FPO, number 611, came into operation at Miðvágur, on Vágar.

The third and final FPO that operated in the Faroes was number 695. This was allocated for use on 13 March 1943 and employed in Tórshavn until September 1945 when the last of the regular Garrison left the islands. FPO 695 was clearly a replacement for FPO 219 but the reason behind this change is unclear and there was a period of several months when use of their cancellers overlapped.