The Penny Post, first used in London in 1680, allowed the public to send a piece of mail for one old penny. Discover more about the history of the Penny Post and the related handstamps to collect in our special guide.

The Penny Post – the simple system by which a piece of mail was delivered for one old penny – predates the postage stamp by many years. The London Penny Post, the first of its kind, dates back to 1680, whilst the USA's first penny post was in use for just a few years from 1847.

The origins of the Penny Post go back to the time when mail deliveries were made between the main and sub-post offices of towns, with no local or door-to-door service. In 1680 William Dockwra and his business partner Robert Murray noted this gap in the market and began the London Penny Post…

The General Post Office pointed out that they had a monopoly on mail deliveries and soon took over Dockwra's service themselves, running the London Penny Post for the next hundred years.

In 1765, Penny Posts were allowed in any town or city in Great Britain or Northern Ireland.

Nearly a century after William Dockwra's service was shut down, a local private penny post was established in Edinburgh by a man named Peter Williamson. Established in in 1773, Williamson’s post offered delivery between 17 shops in the Scottish capital and employed four delivery men.

Once again, in 1793, the service was suppressed and taken over by the Post Office.

The London and Edinburgh Penny Posts had a huge influence on the mail service for the entire nation and it was not until the postal reforms of Rowland Hill - first proposed in 1835 - that the system was dramatically changed.

The Uniform Penny Post was established on 10 January 1840, with the major change being that recipients no longer had to pay for delivery. Instead pre-payment was required, a move that led to the invention of the postage stamp. From 6 May mail delivery could be prepaid with a postage stamp, known as the Penny Black, or the Mulready envelope.

The Penny Post rate ended in Great Britain in 1918.

Although the original Local Penny Posts were introduced well before postage stamps came into use, the penny post handstamps provide today's philatelists with items to collect. Handstamps were used for Dockwra's penny post and up until the introduction of stamps in 1840 (although many continued to be used into the 1850s). 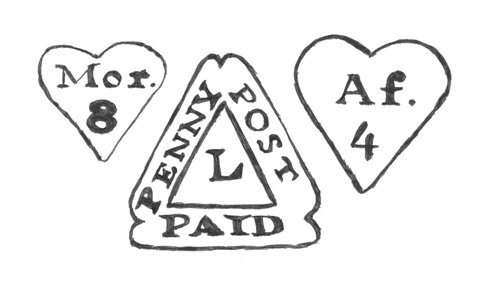