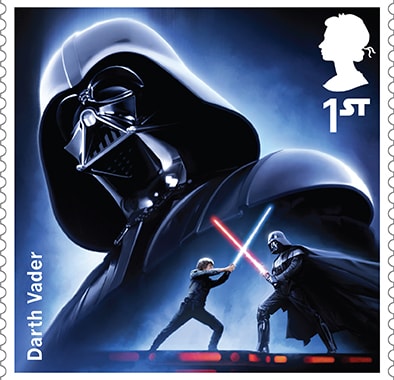 Discover the full technical details of Royal Mail's Star Wars stamps, including the many related philatelic souvenirs to be issued… ...

The Star Wars characters are depicted across twelve 1st Class stamps, priced at £7.56 for the set, each showing the denomination in the familiar Star Wars font, while a miniature sheet (£3.78) includes another six 1st Class values depicting vehicles from the films.

The artwork for the twelve stamps has been created by British artist Malcolm Tween, and fans of the older films will instantly recognise nine of the popular characters shown. Three of the stamps, meanwhile, show characters from the forthcoming The Force Awakens film, to be released in cinemas on 17 December. Incorporated into each stamp is a secondary character or scene forming ‘unique images that can be found nowhere else.’

Miniature sheet
The six-stamp mini-sheet celebrates the vehicles of the galaxy far far away: Resistance X-Wing Starfighters, Han Solo’s Millennium Falcon, Tie Fighters, X-Wing Starfighter, First Order Special Forces Tie Fighters and the four-legged At-At (All Terrain Armored Transport) Walkers. Each of these 1st Class stamps is a different size and combine to create a dynamic collage with the Death Star in the centre.