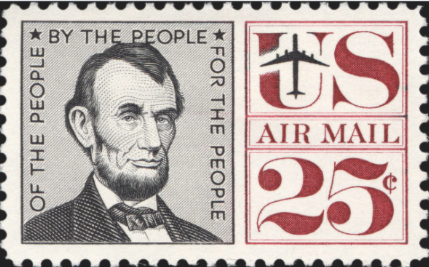 The life of Abraham Lincoln provides plenty of scope for a thematic stamp collection, as our collecting guide to stamps honouring the 16th President of the United States reveals.

Born in a one-room log cabin in Kentucky to two farmers, Lincoln's childhood involved several moves around the country and the untimely death of his mother, when he was nine years old. The unusually tall young man was largely self-educated and left the family home aged 22, to embark on his varied career, first as a delivery man and a rail-splitter (chopping wood for use on the railways) then, after teaching himself law while working as the Postmaster of New Salem, as a successful lawyer in Springfield, Illinois.

This early part of Lincoln's life is celebrated on the first two of four stamps to be issued by the US Post in 2009, which depict young Abe chopping wood and serving as a lawyer. The 2009 set is one of many American issues celebrating Lincoln's life, yet the locations in which he lived and the events of his political career mean there is more to the Lincoln theme than simply specialising in his philatelic portrait.

After marriage to Mary Todd in 1842 (which led to the birth of four children, including son Tad who was depicted with his father on a 1984 'Nation of Readers' stamp), Lincoln's political career began in earnest as he was elected to the House of Representatives.

Yet his outspoken views made him an unpopular figure and he eventually dropped out of politics until the following decade, when the Kansas-Nebraska Act prompted him to stand for the Republican Party. Lincoln's debates with Democrat candidate Stephen A Douglas highlighted his flair for public speaking and quickly transformed him into a powerful figure.

The famous war of words between the two men was recalled 100 years later on a 1958 brown 4-cent issue depicting Lincoln on stage before an outdoor crowd, with Douglas looking on. A further three stamps were issued the following year to mark the 150th anniversary of Lincoln's birth, with a showing Daniel Chester French's famous sculpture found inside the Lincoln Memorial in Washington DC.

Elected as President just weeks before the American Civil War began, in March 1861, Lincoln's time in office was complicated by the rebellion of the Confederacy, made up of 11 southern states, and the escalating disagreements over the future of slavery. There are many issues recalling the conflict, including a sheet of 20 American 32-cent stamps issued in 1995, but a thematic collection could also include the stamps of the time, which were influenced greatly by the instability across the country.

During his eventful years in office, Lincoln's most lasting legacy was the signing of the Emancipation Proclamation, which paved the way for the abolition of slavery.

The centenary of the historic order was marked on a 1963 stamp, which fits into both a Lincoln-themed collection and a collection themed around the subjects of freedom, civil rights and equality. Yet many of the decisions Lincoln made did not consider the liberties we expect, and many thousands of Confederate sympathisers were imprisoned without trial.

Another law passed during Lincoln's tenure was the Homestead Act, which gave settlers the chance to claim land for cultivation, so long as they had not fought against the Union. The law proved controversial, and some believe it caused the Dust Bowl of the 1930s, yet the act was celebrated on a stamp in May 1962 which showed a humble hut with a couple standing in the doorway.

Both frustrated and fascinated by the Civil War, Lincoln looked forward to the reconstruction of the country, the Southern states in particular, as he entered a second term in office and the war came to an end. Sadly, he was assassinated in April 1865 by John Wilkes Booth and never lived to see the country become unified again.

A year after his death, Lincoln appeared on a US stamp for the first time, with a black 15-cent value being issued. Seen on a variety of stamps from other countries, including Antigua and Dominica, on various patriotic covers issued over the years, and in sculptures such as Mount Rushmore in South Dakota (which has inspired at least five US stamps).

Lincoln's portrait is familiar around the world. It looks as though the bearded face will continue to be seen on stamps – not to mention currency - in years to come as the recently formed Abraham Lincoln Bicentennial Commission seek to promote the former President's achievements.