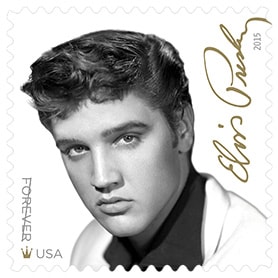 1. One of the most frequent subjects of pop music stamps is Elvis Presley, shown on this 2015 USA stamp, issued as part of a ‘music icons’ series. The design featured a small gold crown in the bottom left, as a nod to Presley’s status as the king of rock ‘n’ roll.

2. No music collection would be complete without a Eurovision stamp, and have been plenty to choose from over the years. This 2007 stamp honours glam horror metal star Lordi, who won the contest for Finland the previous year.

3. In 2008 the USA featured one of the world’s first pop stars, Frank Sinatra, who the USPS called a ‘supreme interpreter of American popular song’. Sinatra is shown dressed in a suit, tie and hat, with his signature printed across the portrait.

4. Pop princess Kylie Minogue was included in Australia’s 2013 ‘Australian Legends of Music issue, and she is shown here in front of a background of musical notes.

5. Greece’s pop music issue of 2010 featured six stars from years gone by, including bouzouki musician Giorgos Zampetas, an Athens-born singer who honed his skills in his father’s barber shop.

6. Israel may not be the first country people associate with pop, but the country has produced many stars over the years, including Jerusalem-born singer Yossi Banai whose son carried on the family’s music tradition with rock band Mashina.

8. In 1983, Sweden paid tribute to one of its greatest musical exports – Abba, pictured on this black & white stamp which was part of a Music in Sweden issue.