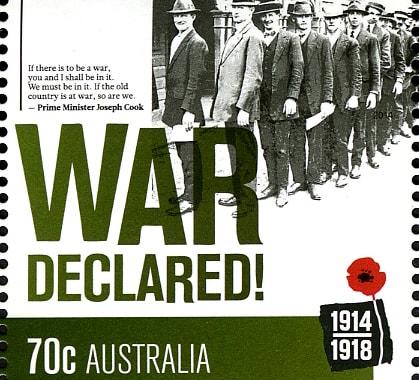 War declared! Australia’s striking 2014 set, looking at the outbreak of the Great War

Commemorate the centenary of the Great War of 1914-1918 with our pick of five commemorative World War I stamps issued by nations around the world.

Commemorate the centenary of the Great War of 1914-1918 with our pick of five commemorative World War I stamps issued by nations around the world.

The centenary of the Great War runs from 2014 to 2018 and has seen dozens of stamps issued on the theme in the last four years. The sheer scale of the loss of life in World War I (1914-1918) which saw more than 38 million deaths around the world, has made this a challenging subject for stamp designers to tackle. After all, how can a small piece of paper possibly sum up one of mankind’s greatest tragedies?

Stamp bureaux around the world have risen to this challenge admirably, with many well designed, poignant and thought-provoking centenary stamps available to enhance or start a collection on the subject.

1. Australia has embarked upon a five-year Great War stamp programme, with a focus on commemorative dates. Australia Post worked with the National War Memorial in Australia to come up with five themes which would reflect Australia’s contribution to the Great War, and the country’s wartime losses. The themes, which run throughout the five years, are: key events, conflicts, the home front, individuals, and general interest. This 2014 War Declared! stamp looks at wartime conscription.

2. Serbia’s six-stamp World War I stamps of 2015 featured six British World War I heroines: Captain Flora Sandes, the only British female to bear arms in the Great War; Evelina Haverfield, who set up Scottish Womens Hospitals in Serbia; her colleague in the SWH, Elsie Inglis; and three volunteer doctors from the Great War – Dr Elizabeth Ross, Dr Isabel Emslie Galloway Hutton (pictured on the stamp shown here) and Dr Katherine MacPhail OBE. Each of the women is shown in a colour portrait, against a background of that woman’s war work, including a Red Cross ambulance and a hospital ward.

3. Gibraltar’s 2015 six-stamp centenary set is a great addition to any centenary collection, not only because it covers the process from call to war through to the battlefield, but because it features everyday heroes and heroines, who are captured on black & white photos. Through the six stamps, we follow the journey of a soldier and his family, remembering those who were left behind whilst their sons and fathers went to war. Each of the six stamps features a red poppy, with the themes developing as follows: your country needs you, joining up, leaving family, kit issue, training, embarkation.

4. The theme of wartime conscriptino is a particularly poignant one for the Great War, as thousands of young men, many of whom were under age, signed up in the first weeks of the war to fight the enemy in a war which many felt would be ‘over by Christmas’. In 2015, New Caledonia issued a striking stamp titled ‘New Caledonian enlistment in the Great War 1915-1917’ which featuring a drawing of a troop ship ready to depart, watched by a crowd of anxious friends and family. How many of these men would see home again?

5. There have been several Battle of Gallipoli anniversary stamps over the past century, including Australia in 1935 and 1965. One of the most striking Gallipoli centenary issues is New Zealand’s 2015 stamps, which were the second instalment in its Great War series. The stamps honour both New Zealand and Australia’s contribution to the Gallipoli campaign, with designs including a war poster, nurse Evelyn Brooke, war art, and period photographs.

Extract from an in-depth study of World War I centenary stamps, which you can read in full in the August 2017 issue of Stamp & Coin Mart magazine.