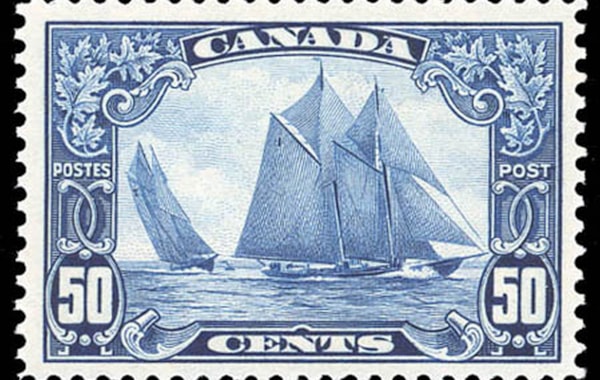 Canada's 1929 50c 'Bluenose' stamp is regarded by many collectors as Canada’s finest national stamp, so how much should you pay for the classic stamp? We take a look at examples and prices…

Why did Canada depict the Bluenose on a stamp?

In the late 17th century English and French fishermen sailing to the shallows off Nova Scotia developed a method of onshore fish preserving that combined salting and air-drying. The process allowed crews to return to their home ports after several months with vessels full of succulent cod. Over time a type of ship design developed that proved ideal for both fishing and for returning home swiftly with heavy catches.

The schooner depicted on Canada’s 1929 50-cent Bluenose stamp was the evolution and culmination of that design when she launched in 1921.

The 'Bluenose' vessel's success at sea gained her a place on the 50c stamp in the Canadian Post Office’s King George V definitives commemorating the provinces of Canada: the Dominion Issues of 1928-29, which were recessed by the Canadian Bank Note Co., Ottawa.

The Bluenose stamp is regarded by many collectors as Canada’s finest national stamp.

The first rung on the Bluenose ladder for collectors must surely be to acquire an example of the 60-cent Canada 1982 International Philatelic Youth Exhibition, stamp-on-stamp, which has the 1929 Bluenose as its subject. Issued on 20 May of that year (and shown below), it depicts a litho printed example of the engraved classic. Examples on Canadian eBay sell at around £3 including shipping to the UK. 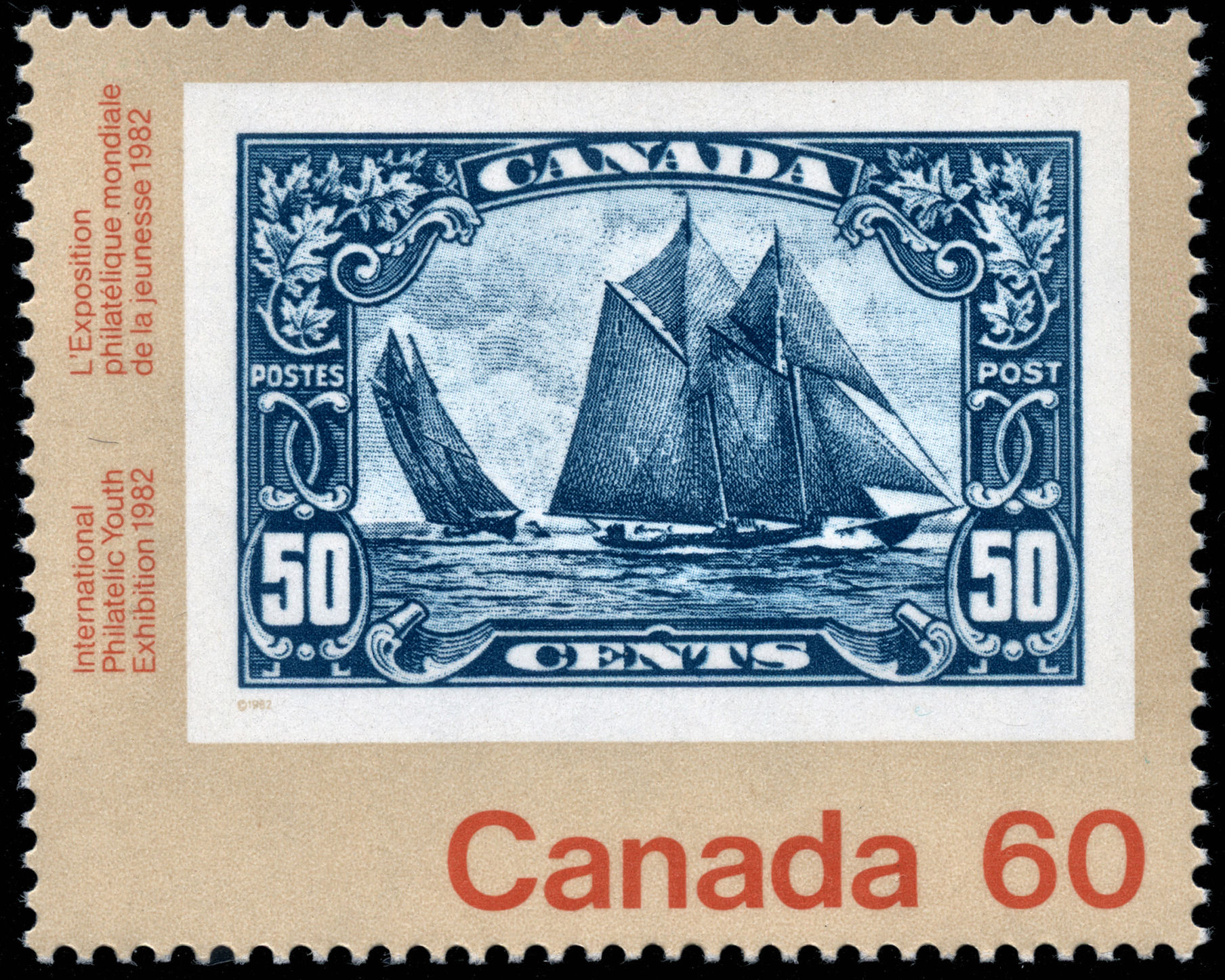 The least expensive collectable single of the 1929 stamp we turned up in our quest was a Rushstamps offering: fine used, well-centred, with only minor shortening of the bottom left corner perforations, and a somewhat smudged cancellation. Asking £15 with free postage makes it a good buy. 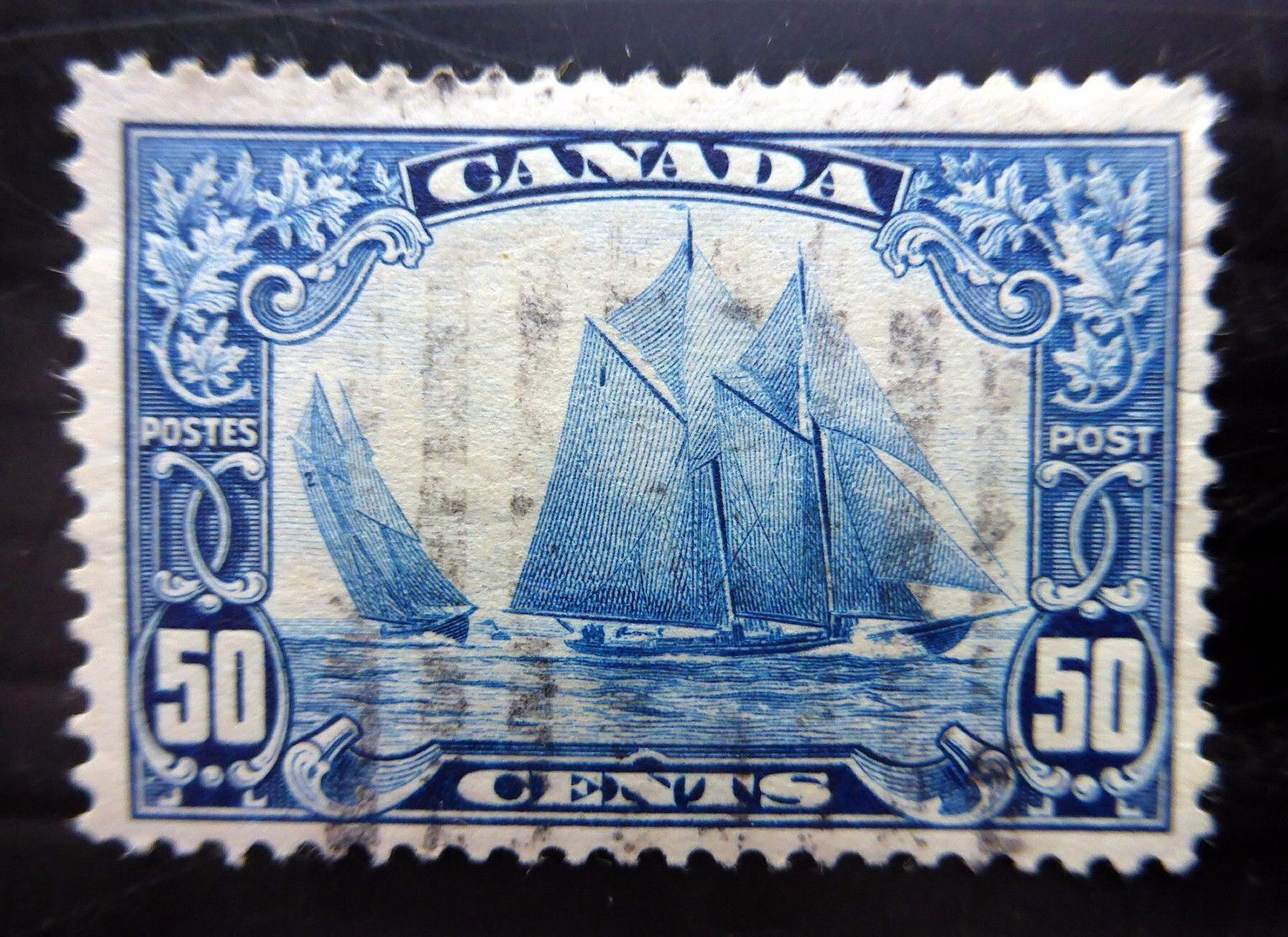 A stamp in similar condition, including a couple of shortened corner perforations, but with a much lighter cancellation, was offered by Canadian eBay seller suarkj for £43 including free international letter post. 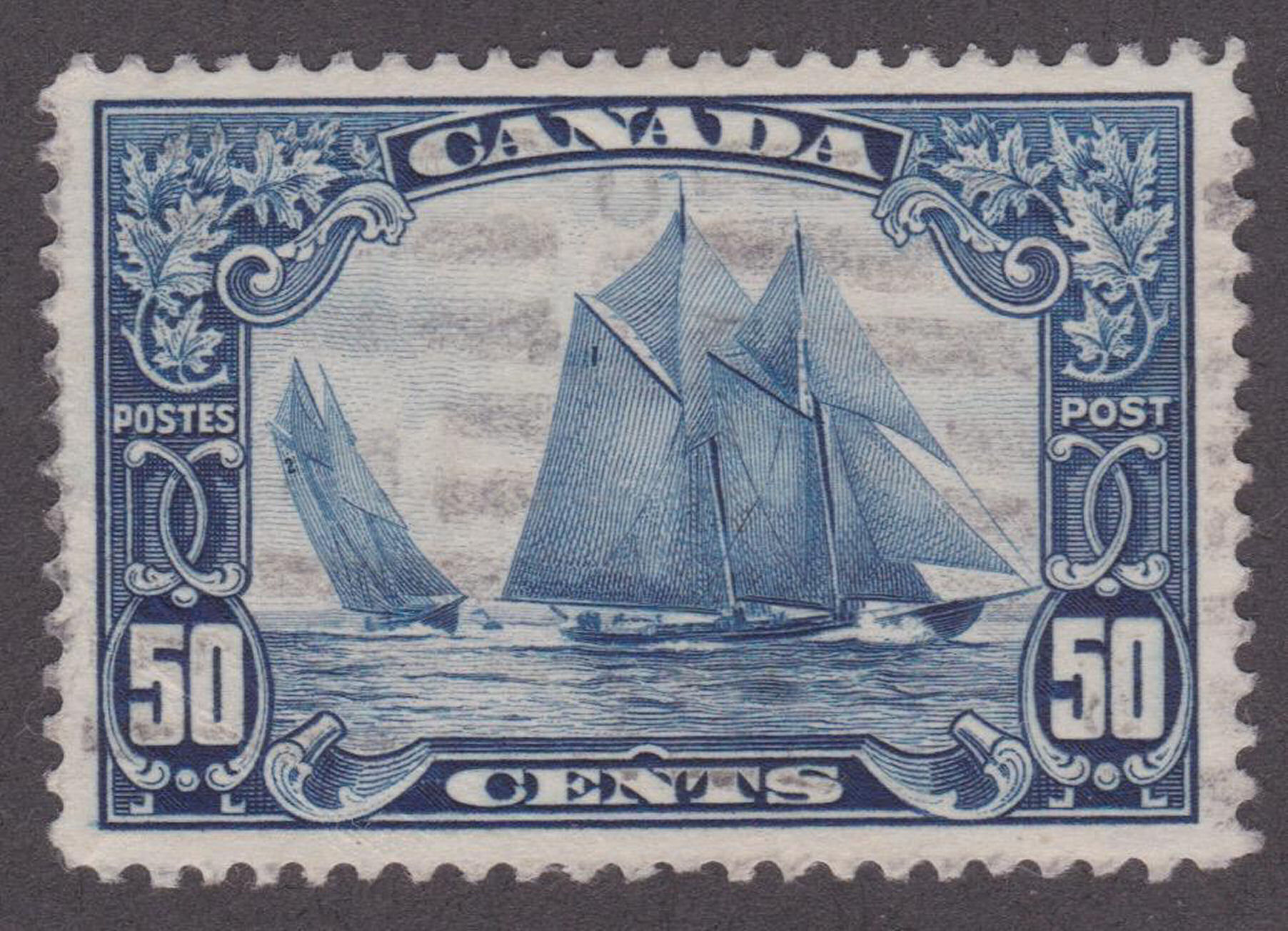 Moving into the mint never hinged category we also move to the three-figure bracket, with a typical offering from Arpin Philately, Canada who recently had a clean, well-centred, neatly perforated example, flagged as 'probably re-gummed' and offered at £140. 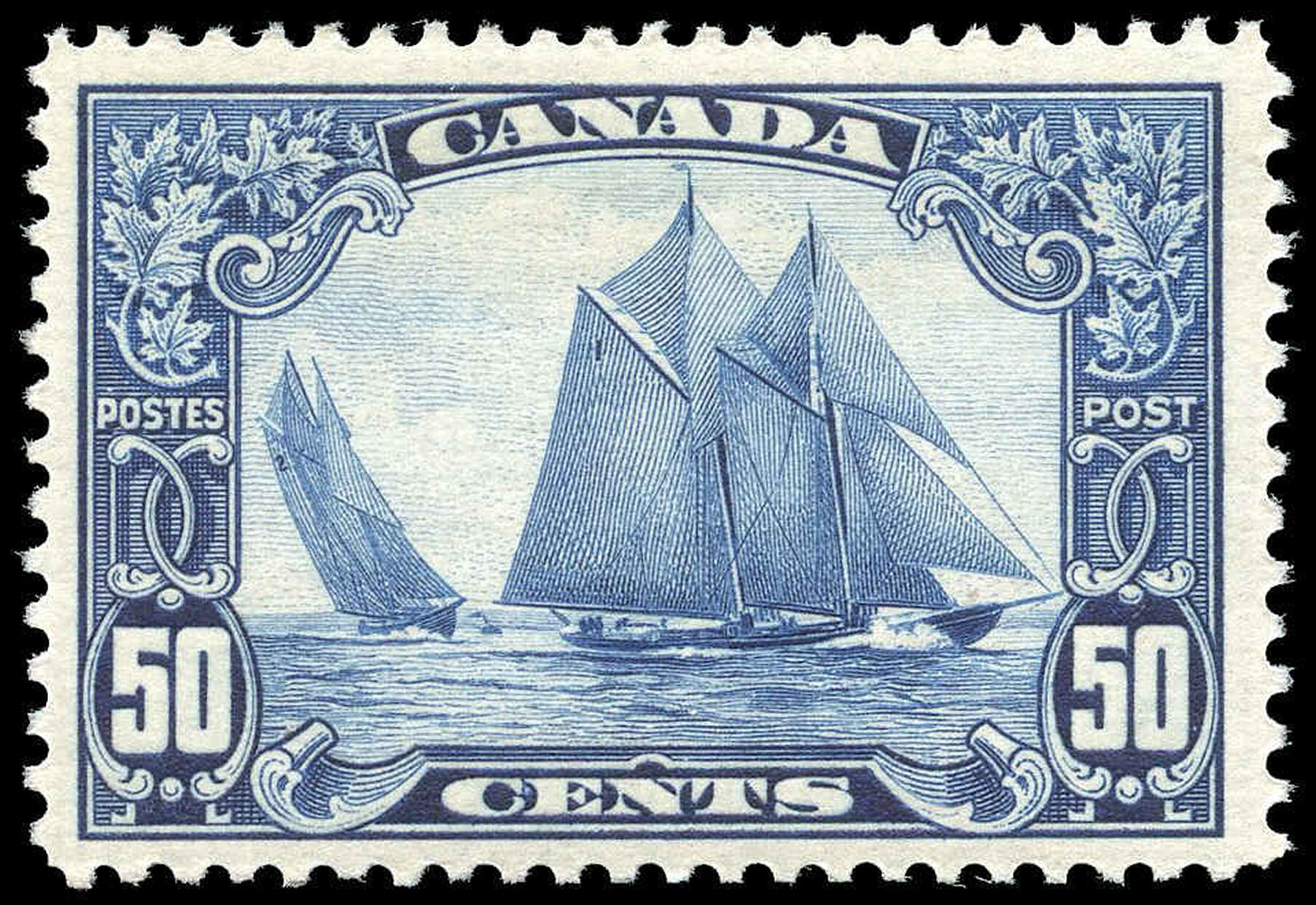 That price makes a recently sold Grosvenor Auctions lot – a fine mint block of four for £120 – seem a bargain price. True, the perforations were not pristine all round, but they were lovely stamps nevertheless. 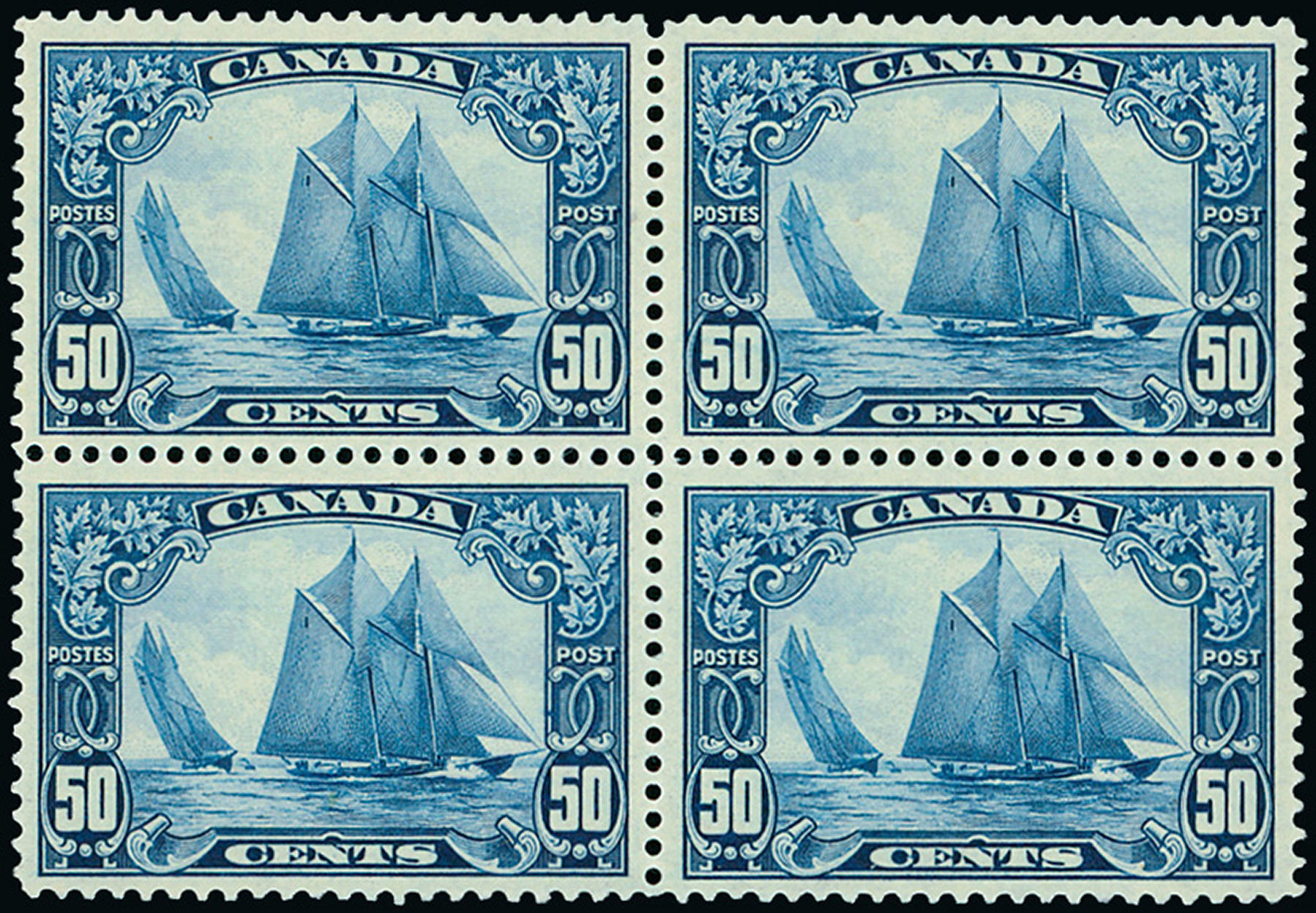 Before showing you our highest priced example, we must mention that in 2001 a Bluenose first day cover sold for £2,100. Our final example is also in the four-figure bracket: a Bluenose man-on-mast variety which was recently sold for £1,200 by Daniel F. Kelleher Auctions in the USA. The man-on-mast is, in fact, a small ink blot (see close-up below). 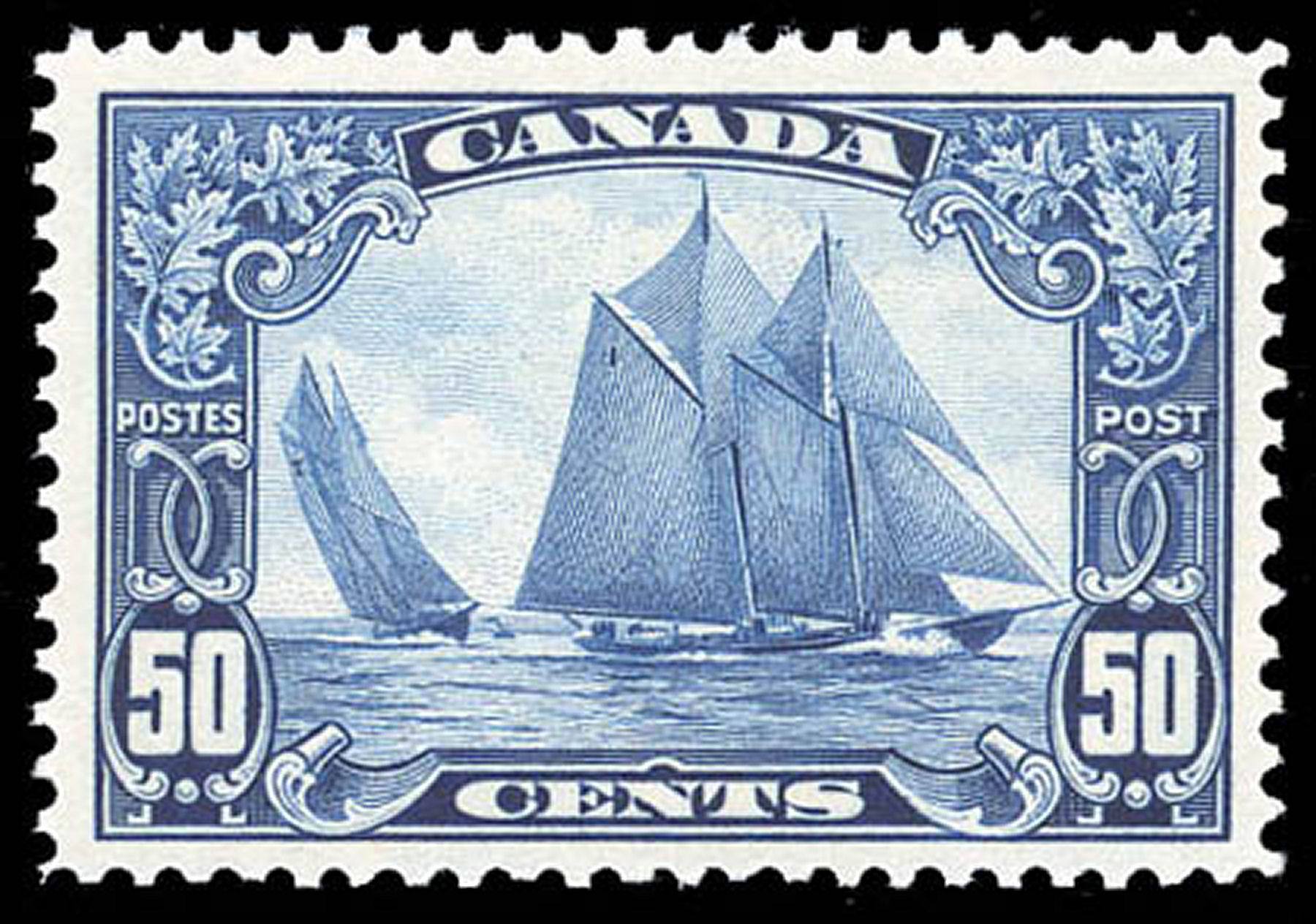 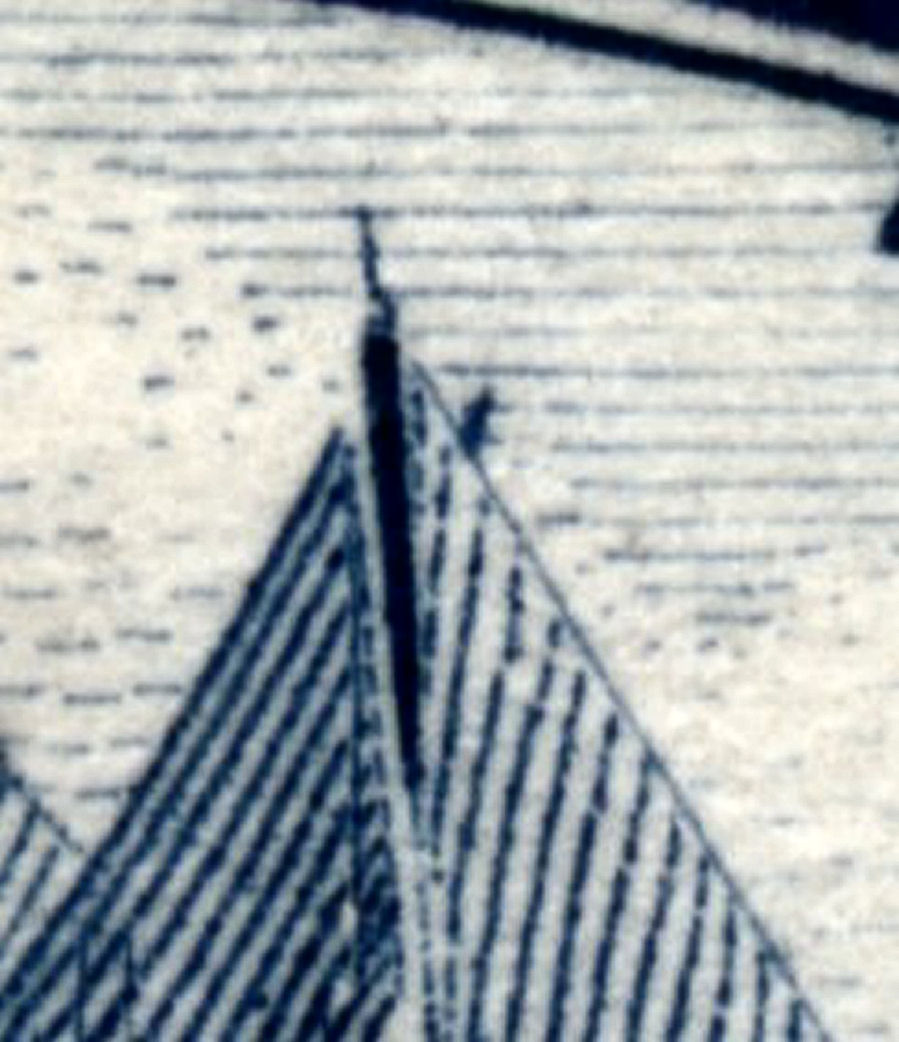 Keep your eyes peeled and you may spot this flaw one day.

Find Stamp dealers specialising in Canada and North America in the 'Find a Dealer' directory.