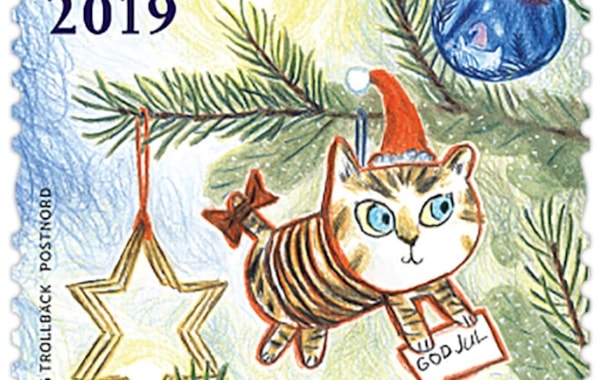 A round-up of the Christmas stamps revealed so far by post offices around the world.

The USA has gone for a traditional approach with a set of four each showing ‘Holiday Wreaths’. According to the postal service the stamp designs ‘create feelings of warmth and welcome’ and are ‘inspired by the holiday decorating traditions of early America, the four wreaths featured on these stamps are classic yet contemporary.’

Switzerland’s four stamps reflect traditional themes, but also showcase another interesting aspect of the Christian tradition: ‘the colourfulness and grandeur of church windows’. The simple designs each depict a typical Christmas symbol: a gift, snowflake, candle, and star, and according to Swiss Post the designer was influenced not by stained glass windows but leaded windows of the Middle Ages. Another set of four, this time from Liechtenstein who also used the Swiss Franc, also each depict something seasonal, namely a Snowman (CHF 0.85), a Rocking Horse (CHF 1.50), The Nutcracker (CHF 1.00), and Angels (CHF 2.00).

Iceland’s Christmas stamps will be issued with a hint of sadness as the set is likely to be the last stamp issue from the country, following the news that the philatelic bureau is to close (as reported in Stamp Collector). The pair of stamps show ‘old Icelandic Christmas trees’. Meanwhile, Aland Post explore the magic of snow crystals using watercolour images on a pair of stamps.

An Post have issued six Christmas stamps depicting various Christmas themes, using paper craft illustrations, based on ‘Sending Love’ and ‘Community & Christmas Traditions’. Four rectangular stamps feature carol singers, a well-wisher putting their Christmas card in a post box, seasonal swimmers taking a icy dip, and a religious scene of Mary and Joseph. Two portrait stamps feature the three kings and a snoy scene. Ireland have also re-issued the €1 ‘Elf on the Shelf’ stamps in a special pack that also includes postcards. Christmas Letters and tree decorations are the themes for Sweden’s stamps, with ten designs that form an image of a tree across the stamp sheet.