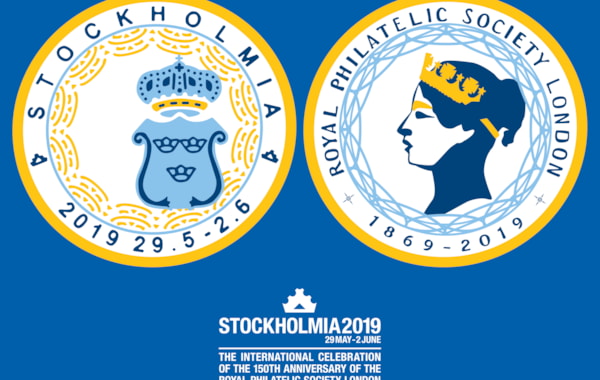 The final countdown for the Stockhomia 2019 stamp exhibition is underway, with the organisers revealing further details about the event and launching the official catalogue.

The major event has been called the ‘international celebration of the 150th anniversary of the Royal Philatelic Society London’ and takes place in Sweden’s capital from 29 May to 2 June 2019.

HM King Carl XVI Gustaf of Sweden is the Patron of STOCKHOLMIA 2019 and will open the event at a special ceremony, and the event will feature a range of philatelic exhibits, and dealers and auction houses from all over the world.

A two-volume exhibition catalogue was recently launched at The Royal Philatelic Society London headquarters, at 41 Devonshire Place; whilst three specially produced postcard designs have also been revealed; each design ‘addressing the target groups’ for the show. The Postal Museum in Stockholm have also revealed special exhibits which will be on display during the event.

Meanwhile, an example of the STOCKHOLMIA 2019 souvenir sheet featuring an illustration of the ship S/S Scandinavian, has been discovered with an inverted centre. According to the organisers: ‘Recently, a fantastic find was made, as one sheet printed with inverted centre was found. The inverted center means that the ship in black in the middle, surrounded by the blue frame, is inverted by 180 degrees. Following the find, we consulted expert stakeholders of The Royal Philatelic Society, and we have agreed that the inverted sheet of twenty will be split to units.’

The block of six, as the largest multiple of the new discovery, will be offered at the event’s rarity auction, conducted by The Global Philatelic Network on 1 June. The statement concluded: ‘The other units will be offered in due course for the benefit of Tomorrow’s Royal.’