A tale of two duchesses: the stamps of Luxembourg In this latest expert blog, Dr David Parker explores stamps from the reigns of Marie Adelaide and her sister Charlotte, Grand Duchesses of Luxembourg.

Stamp issues can highlight a nation’s aspirations, and during the First World War they were used aggressively by conquerors to mark a country’s defeat and occupation. However in the case of the Grand Duchy of Luxembourg it was the absence of special stamps that was sometimes significant.

In 1912 Marie Adelaide, aged just seventeen, became Grand Duchess of the small independent state of Luxembourg. Its constitution allowed its rulers considerable political power, and the scene was set for controversies that long outlasted the impending war.

On the night of 1-2 August 1914 German forces ignored all treaties and trade agreements, and crossed into Luxembourg, primarily seeing it as a vital passageway into France and southern Belgium. Marie Adelaide ordered her army of 400 men not to resist, and after a formal protest she accepted German military rule as inevitable, although her greatest fear was formal absorption into the Reich. It was this that led the duchess and her able prime minister, Paul Eyschen, to ensure the duchy and its citizens did nothing to incite the Germans to end the duchy’s internal self-government. In tacit agreement, the Germans acquiesced and Luxembourg stamps, without any overprints signifying German authority, continued in use throughout the occupation.  Everywhere else, as in neighbouring Belgium, the Germans insisted on the use of overprinted Germania stamps.

In October 1915 Eyschen died, and without his guiding hand Marie Adelaide’s obdurate Roman Catholicism and innate conservatism began to incite opposition to her personal rule that lead in turn to disturbing political instability. Her unsettling dismissal of several ministries were compounded by increasing shortages of food due to disrupted imports and poor harvests, and then the growth of a rampant black market after rationing was introduced. Civil unrest mounted, and in May 1917 the Germans intervened to repress a strike in the iron and steel works upon which they relied for supplies.

Marie Adelaide’s friendly relationship with the German royal family, including the Kaiser who visited her during the war, had not gone unnoticed. It did not help that in August 1918 Antonia, one of her sisters, became engaged to Crown Prince Rupprecht of Bavaria, a German Field Marshal commanding forces on the Western Front.

On the withdrawal of German troops in November local Communists made an bid for power in Luxembourg following the lead of Karl Liebkneckt and Rosa Luxemburg in Germany.  This was suppressed, but the Liberals and Socialists, and also the French, were united in their conviction that Marie Adelaide should abdicate, and when part of the army declared in favour of a republic it needed French and American forces to restore order.  With the duchy in complete disarray, in January 1919 Marie Adelaide agreed to go. Exiled in Germany, she died of influenza in 1924 aged just 29.

Marie Adelaide’s sister, Charlotte, succeeded her.  However, her position remained perilously uncertain until the end of the year when the Paris Peace Conference dashed Belgium’s hopes of annexing Luxembourg and a referendum declared in favour of a grand duchy, not a republic.

For several years Luxembourg made do with stocks of Marie Adelaide stamps, supplemented with a few Duchy Coat of Arms stamps from Grand Duke William IV’s reign (1905-12).  Some in due course were overprinted with new values.  Charlotte’s first stamp, a portrait of herself, was not issued until 6 January 1921. It had no inscription and was a low key commemoration of the birth of her son and heir, Crown Prince Jean, the previous day. 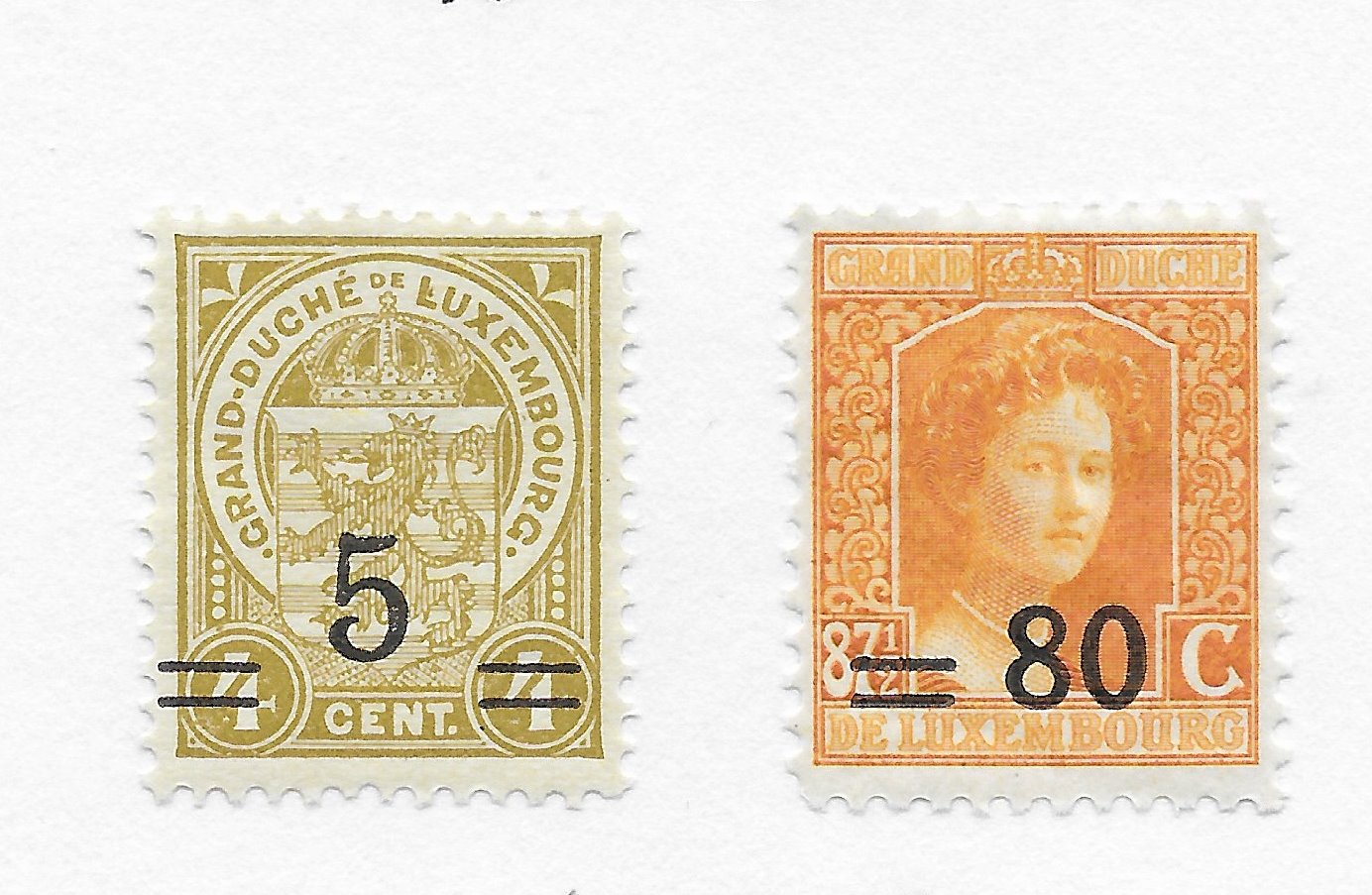 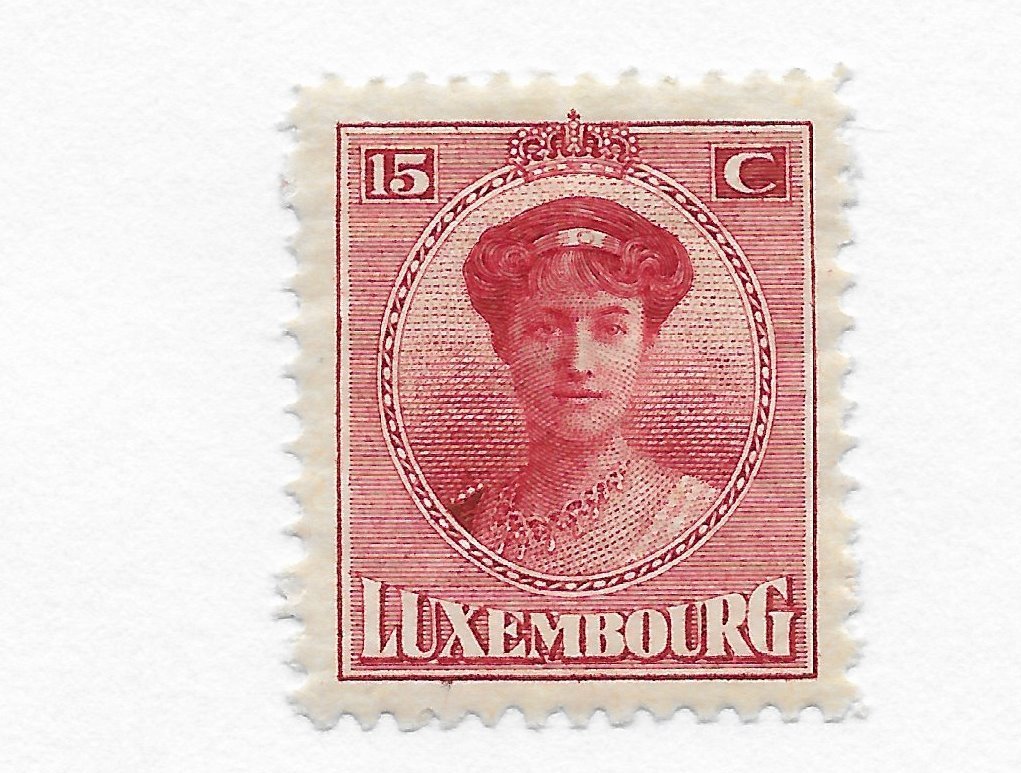 Gradually Charlotte’s position stabilized and strengthened, and a new definitive set was issued from March 1921 with Charlotte’s portrait on the lower values, and three scenic views on the higher ones.(3.4)  The 1f featured Vianden Castle whose history aptly reflected the sensitive relationship between Charlotte’s predecessors and the local people.

In 1820 the Grand Duke of Luxembourg and Count of Vianden (who was also King William I of the Netherlands) sold the castle to a local alderman who started to strip its roof and paneling for sale. This caused such outrage that William repurchased it to calm things down. Restoration work was still going in 1914. In contrast the 2f pictured the mighty steel works at Esch-sur-Alzette that had contributed much to the duchy’s prosperity, and also to the rise of Socialism and militant trade unionism that had contributed to Marie Adelaide’s humiliation. The 5f featured the city of Luxembourg itself and the famous bridge over the River Alzette.

Single pictorial stamps appeared at regular intervals celebrating the duchy – such as the fortress town of Echternach on the German border, Clervaux and its Benedictine monastery in the Ardennes, and the city of Luxembourg itself. Stamps became important as a source of revenue and a boost to post-war tourism.  In 1922 a Philatelic Exhibition was held in Luxembourg, with imperforate 25c and 30c Grand Duchess Charlotte stamps marking the occasion.

In 1921 surcharged pictorial stamps raised funds for a national war memorial. They were reissued two years later overprinted 27 mai 1923 with further surcharges to mark the unveiling.(3.8) The memorial was to the 3,700 Luxembourg citizens, mainly from abroad, who served in the French army and the high number, approaching 2,000, who were killed. It took the form of a soaring 21metre high granite obelisk surmounted by a gilded statue of Nike, the goddess of victory and freedom, holding a laurel wreath. Its striking classical and secular format upset many Roman Catholics, and Grand Duchess Charlotte did not attend the unveiling.

Charlotte shrewdly adopted a far more politically sensitive and less interventionist role than her sister, and indeed the new post-war constitution considerably reduced the ruler’s powers. Under mainly popular right-wing governments, fully supported by the Roman Catholic Church, the duchy regained both stability and prosperity, especially with the development of greater industrial capacity.  It entered into an economic and monetary union with Belgium, and gradually re-established sound trading connections with Germany. The ruling dynasty recovered security and popularity, and special stamps marked the birth of Princess Elisabeth in 1923. The following year several definitive stamps of Grand Duchess Marie Adelaide were re-issued overprinted with CARITAS and charity surcharges to mark her death. The hint of Christian forgiveness accompanied the plea for charitable giving. Two years later, in November 1926 a profile of Charlotte appeared on a new definitive set. 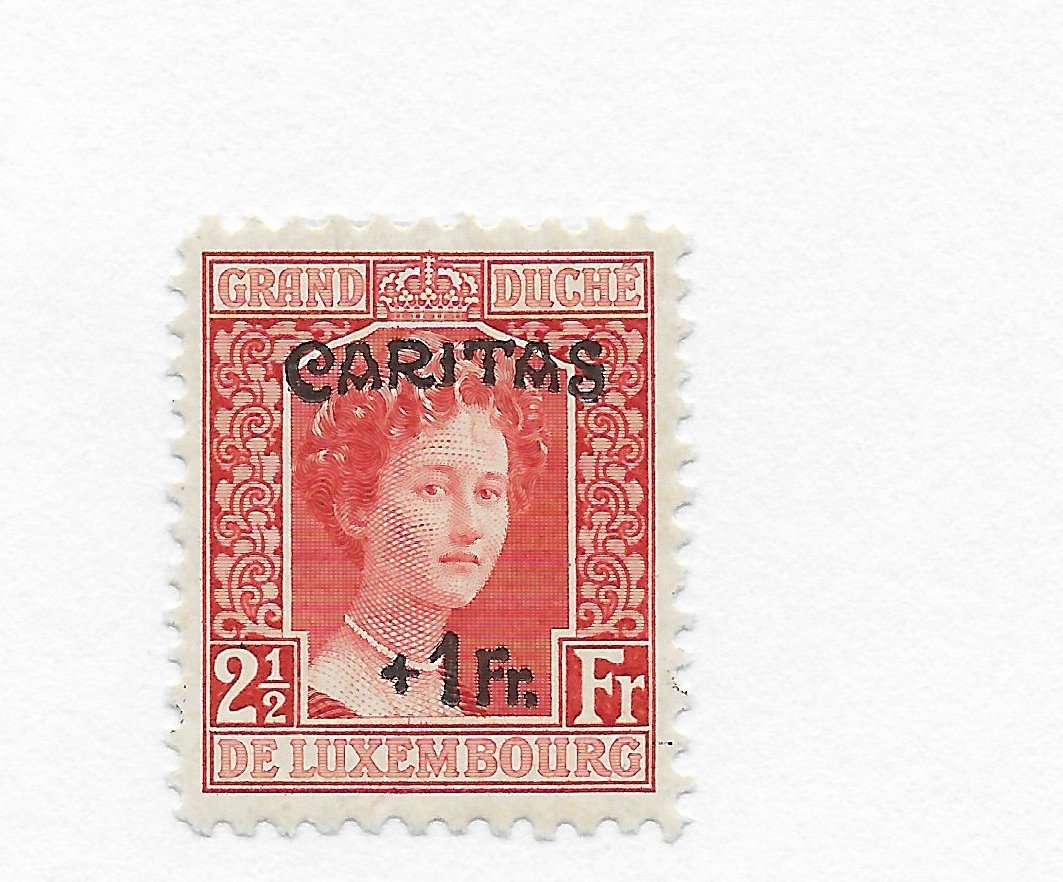 As elsewhere across Europe surcharged sets raised funds for the anti-TB campaign and child welfare charities. In Luxembourg child welfare charities were important, and stamps often featured members of the expanding grand ducal family in the designs. Shrewdly timed, each year they caught the Christmas mood and surge in post.  In 1927, for example, the set featured the young Princess Elizabeth, in 1928 a new Princess Marie Adelaide, in 1929 Princess Marie Gabrielle, in 1930 Prince Charles, and in 1931 Princess Alix. The sets revealed the security of the ruling family’s position, and its image was suitably strengthened. 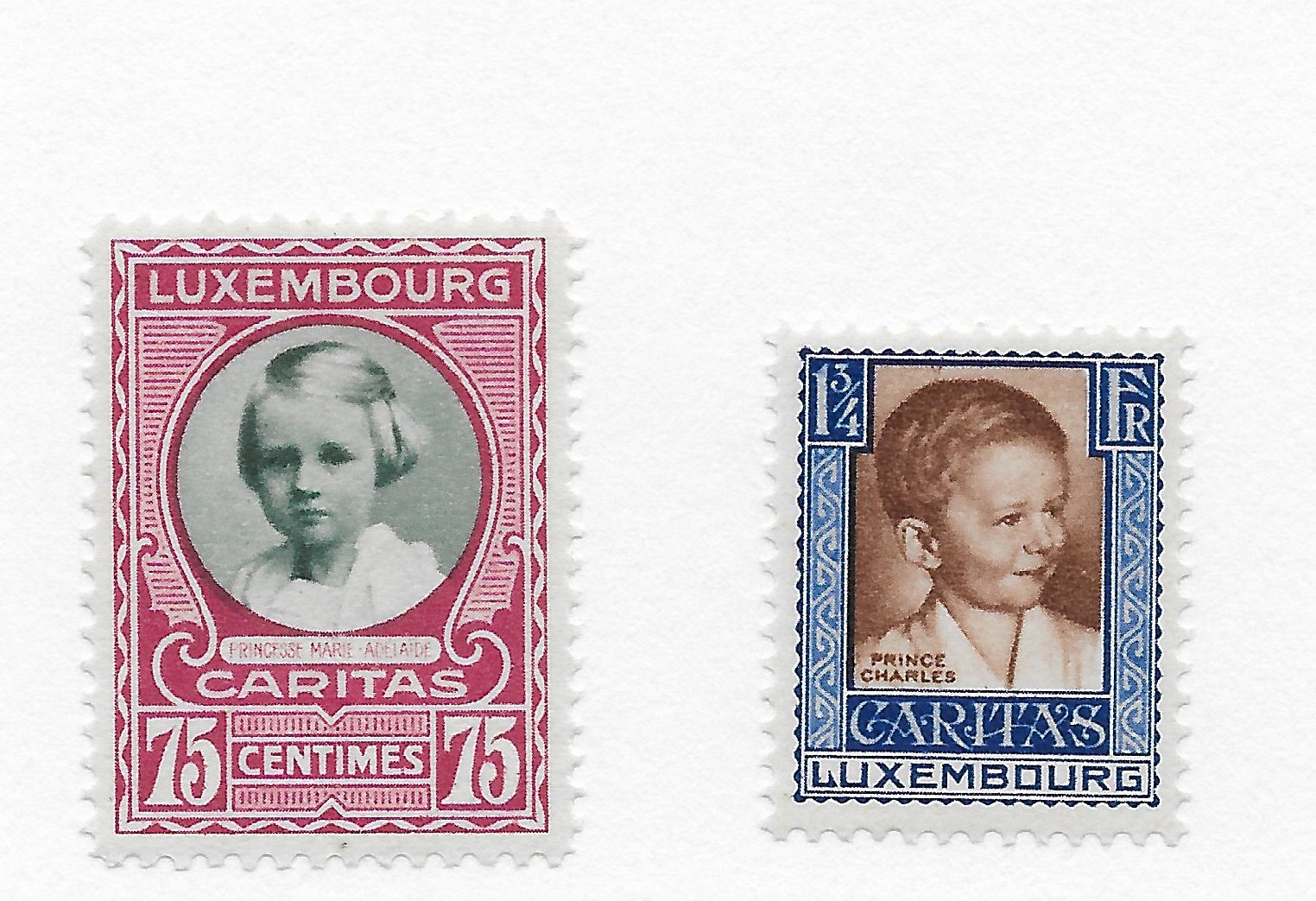 Luxembourg hosted another International Philatelic Exhibition in 1927, and its Grand Duchess, now the symbol of the increasingly prosperous state, graced the stamps marking the event along with her husband, Prince Felix.  In commemoration of the 75th anniversary of the duchy’s first postage stamp the set included the dates 1852 and 1927. 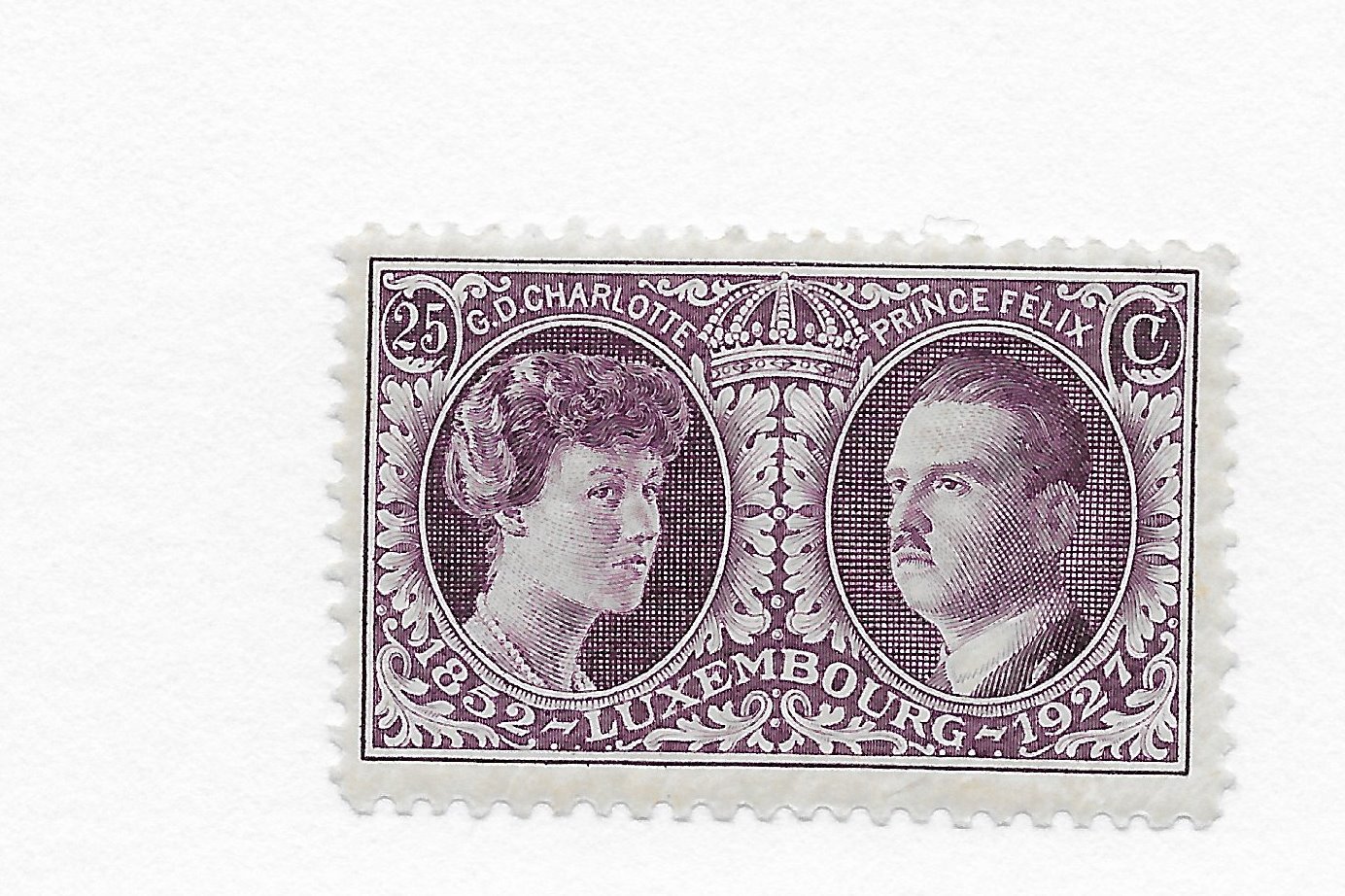 The 1926 definitive set lasted until the 1940 German invasion when, unlike 1914, they were overprinted with German values.  Soon afterwards the grand duchy disappeared into the Gau of Trier-Koblenz, later renamed Moselleland.

QUICK LINK: Stamps and Latvia's bloodstained path to independence in 1918