Albania and the inexorable rise of Zog Dr David Parker uses a selection of intriguing stamps to chart the history of Albania in the years following the outbreak of the First World War.

When the First World War broke out between Serbia and Austria-Hungary on 28 July the newly independent state of Albania started a descent into chaos.  Every other Balkan country sought bits of it. Albanian and Greek forces started cross border fighting, and units from Montenegro moved into northern Albania.

In late 1915 the Serbian army reeling under constant Austro-Hungarian assaults retreated in vast straggling columns across Albania to exile in Corfu.  Many fell victim to marauding Albanian guerillas.  Officially Austria-Hungary and Albania were not at war, and although the suffering of Albanians was largely ignored Austria-Hungary promoted the occupation as friendly and undertaken largely to frustrate Italian ambitions. Ironically Italian ambitions were boundless in the region as they were nothing less than annexation of as much of the western Balkans along the Adriatic coast as possible.

Finally Bulgarian forces appeared in several districts and, significantly, Austria-Hungary and Bulgaria allowed an ambitious local Albanian governor, Ahmet Muhtar Zogolli, much of a free hand in the province of Elbasan.  As we shall see he took full advantage of the situation.

In 1916 French and Italian armies appeared in Albania.  In May the Italians occupied southern Albania, and in November the French occupied the south-eastern region centred on Korce, the former Greek Epirus.  In retaliation, in January 1917 Austria-Hungary declared the north and central to be an independent state under its protection.  In June Italy did the same in the south.

In September 1918 the multi-national Allied forces on the Salonika Front finally broke through Austro-Hungarian lines north of Thessaloniki and forced a gradual Austro-Hungarian retreat from Albania. When the war ended in November Italy occupied most of Albania, Serbia held the far north, Greece a slice in the south and France retained Korce and Shkodra.

The immediate post-war issue was whether the secret clauses of the 1915 Treaty of London would be honoured.  These promised Italy the Vlore region and a protectorate over Albania in return for joining the Allies, along with significant northern parts going to Serbia and Montenegro and parts of the south, notably Epirus, to Greece.

Within Albania widespread fear and anger existed at the thought of partition.  Initially the Paris Peace Conference preferred it, and in January 1920 an outraged Albanian National Assembly threatened armed resistance.

In March the American President, Woodrow Wilson, blocked the Conference’s decision, and in December the League of Nations recognised Albania as a sovereign country.  Its borders, though, remained uncertain and highly volatile, and it needed a brief war to force Italy to withdraw, and even then it retained Saseno Island.

Although Greece received both northern and southern Epirus in 1919, international pressure by Italy secured the northern part for Albania in 1924 but Italy was being far from altruistic.  An independent but weak Albania was just what it wanted, and in Ahmed Muhtar Zogolli it found a ruler who kept the turbulent tribes under firm, if intermittent, control and also welcomed Italian support and finance.

The 1920s saw the dramatic rise of Zogolli from a family of beys or provincial chieftains to government minister in 1920, President Ahmed Zogu in 1925 and finally King Zog I in 1928.  With the support of many conservative beys, merchants and industrialists, and using all the Albanian traditions of repression and execution, he formed a government between 1922 and 1924 only to be wounded by an assassin, blamed for the murder of an opponent, and fall victim to a left wing coup by Fan Noli, a populist left wing politician and founder Bishop of the restored Albanian Orthodox Church.

However Noli failed to consolidate support for social reforms, the abolition of feudalism, and friendship with Soviet Russia, or to eliminate Zogolli’s key supporters.  On 13 December 1924 Zogu and a small military force from the Kingdom of the Serbs, Croats and Slovenes crossed back into Albania and reasserted control on Christmas Eve. Noli and his ministers were wise to flee to Italy.

In January 1923 the first set of Albanian views had appeared, all of which embraced political messages regarding the country’s wartime occupation and precarious post-war unity.  Gjirokaster Castle in the far south had been part of the Greek breakaway region of Northern Epirus in 1913.  Kanina Castle, near Vlore, and Berat in central Albania, had played an important part in the nineteenth century national revival and the 1878 League of Prizren, one of the first movements aiming at complete independence.

One stamp featured the 15th century Venetian style Vizier’s Bridge on the Drin River near Prizren itself, while others pictured the key fortress of Rozafa near Shkodra in the far north-west, Korce in the south-east, and Durres on the Adriatic coast.

In 1924 and 1925 the set was reissued no less than six times with overprints that tracked national events and the rise of Ahmed Zogu to the presidency.  On 21 January 1924 they appeared with the inscription Mbledhje Kushtetuese above a diamond lozenge enclosing TIRANE KALLNUER 1924 (Constitutional Assembly TIRANE JANUARY 1924).  It was this new Assembly that opened up the bitter conflict between parties of the right and left, and notably Ahmed Zogolli and Fan Noli. 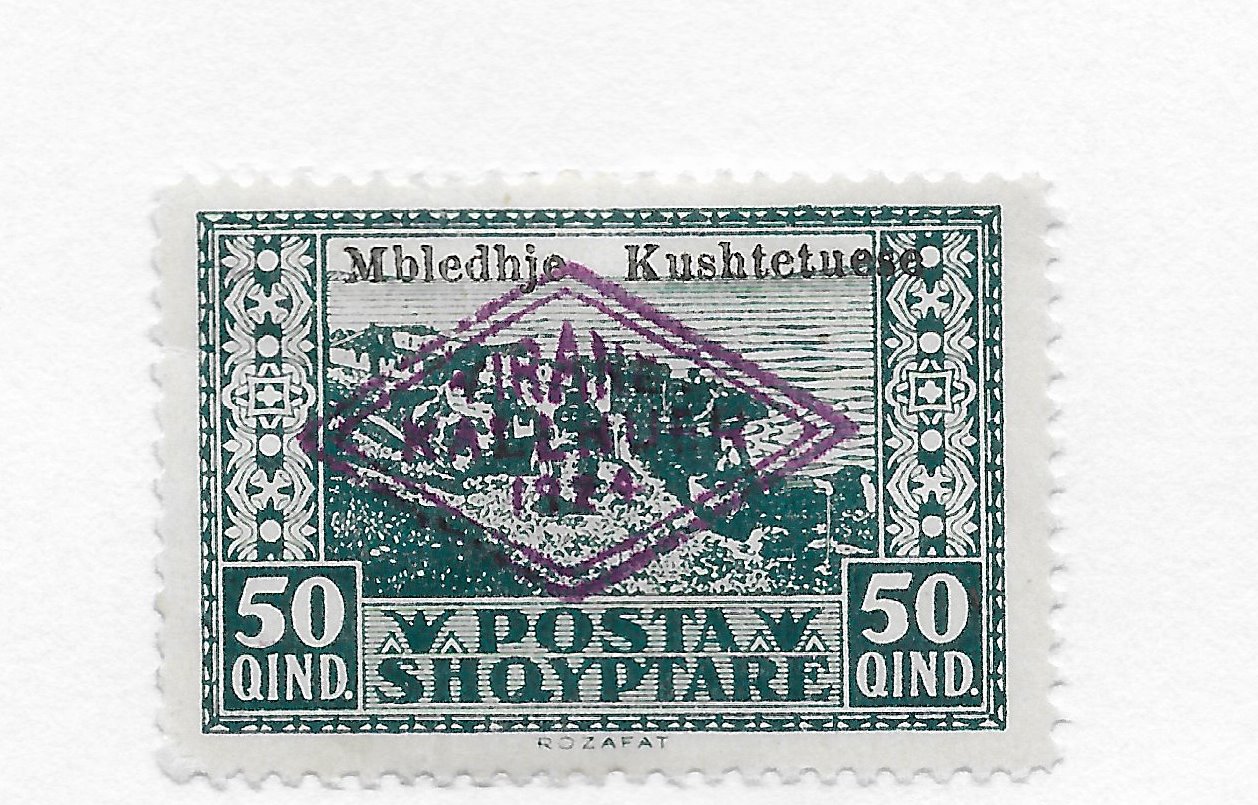 On 5 March 1925 the set was reissued overprinted Triumf’ i legalitetit 24 Dhetuer 1924 (Triumph of Legality 24 December 1924) to celebrate and legitimize Zogu’s coup and position as Prime Minister. 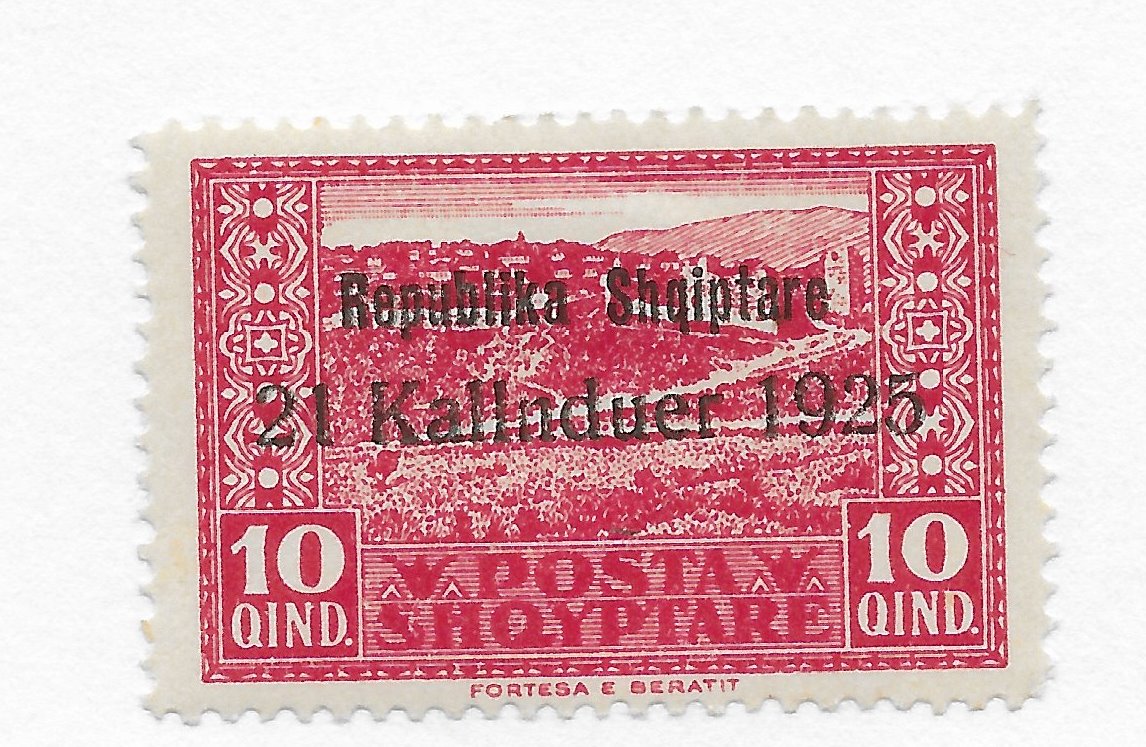 By 5 March, however, Zogu was already President having been elected to that post by the Constitutional Assembly on 21 January 1925. On that day, too, the Regency had been formally terminated, and any lingering thoughts of a monarchy banished - temporarily.  The pictorial set was duly reissued on 11 April 1925 with an overprint saying Republika Shqiptare 21 Kallnduer 1925 (Republic of Albania 21 January 1925).

Unfortunately one stamp on each sheet had the date 1921, not 1925.  On 20 May the set appeared yet again with Republika Shqiptare in larger letters printed diagonally across the stamps.  Hurriedly done, many stamps had spelling mistakes. 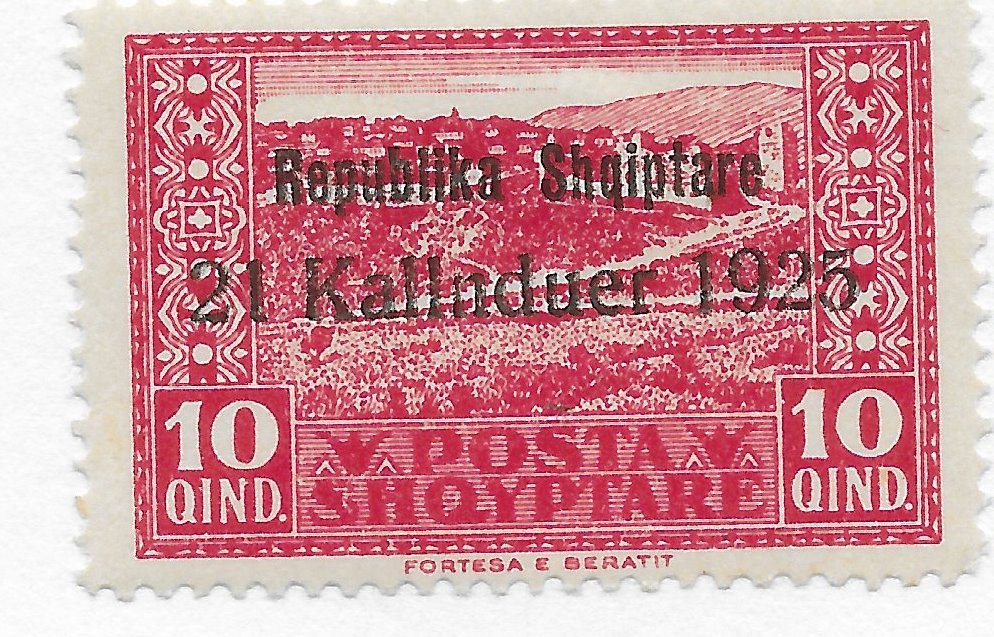 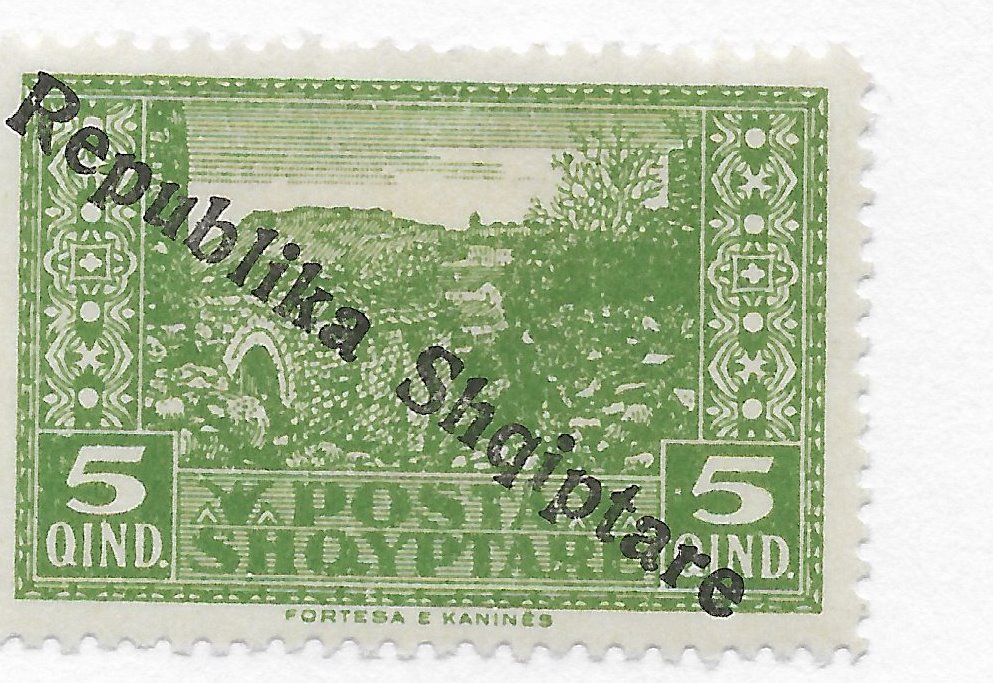 Interspersed with these issues, the Views set appeared overprinted, first with surcharges added to Republika Shqiptare, and then with just a cross and surcharges, on behalf of the Red Cross. 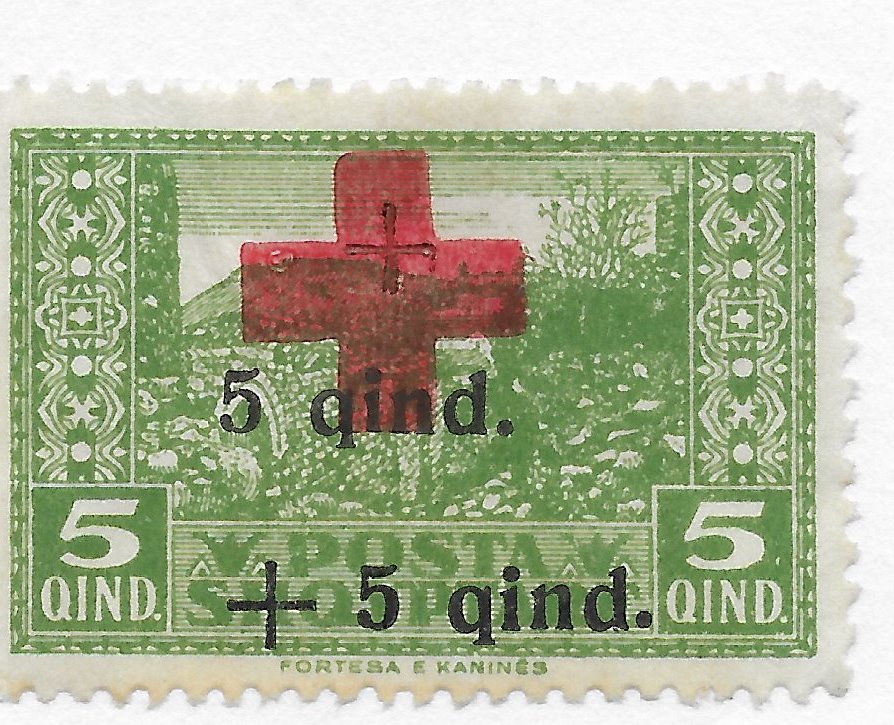 Although President Zogu initiated reforms eroding serfdom and brigandage, and creating sufficient law and order to encourage rural development Albania was a police state and the merest hint of opposition invited savage reprisals.  As their powers were eroded, local tribal beys continued to cause endless trouble, and Zog survived numerous assassination attempts.

With the economy still largely functioning at subsistence level in most rural areas, he relied on huge grants and heavy interest loans from Mussolini to fund major projects – and his grandiose private buildings.  Gradually Mussolini bribed and pressurised Zogu into allowing Italy a greater say in Albanian affairs and thereby inexorably limiting the president’s autonomy.

New stamps for a new age

The stamps, of course, told a different story.  Pictorial and overprinted issues in 1925, 1927 and 1928 glorified the country’s new air mail and passenger services – notably across the Adriatic to Zogu’s ally, Mussolini’s Italy.  In December 1925 the cult of personality got underway with stamps honouring President Zogu himself. 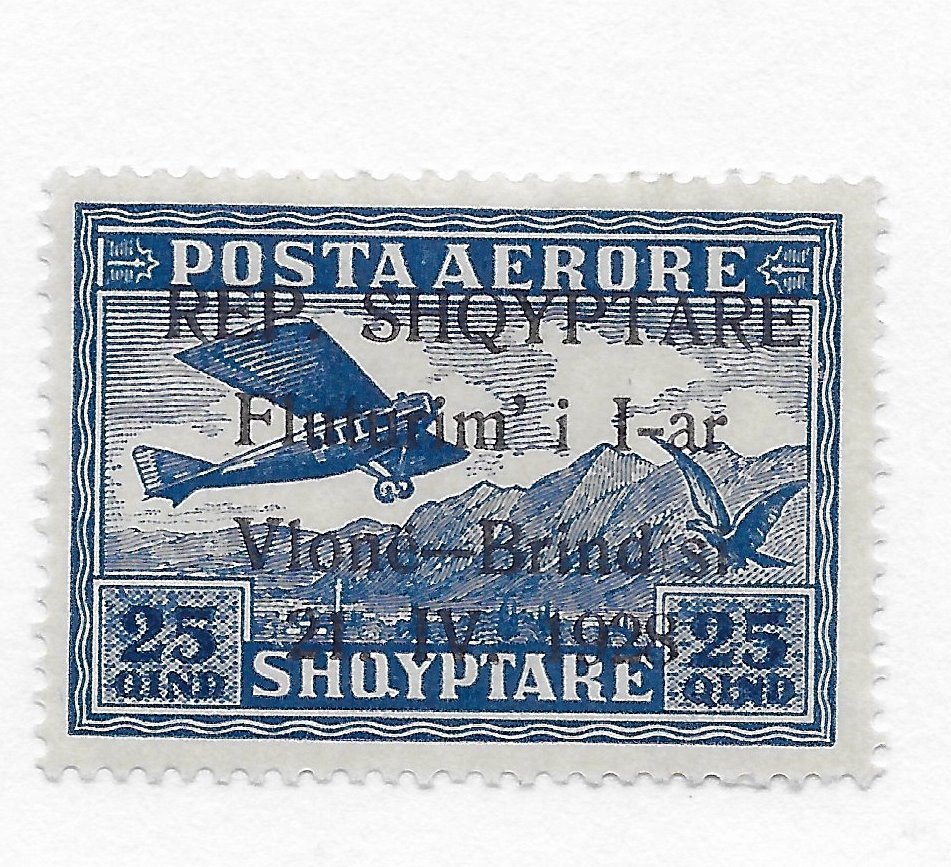 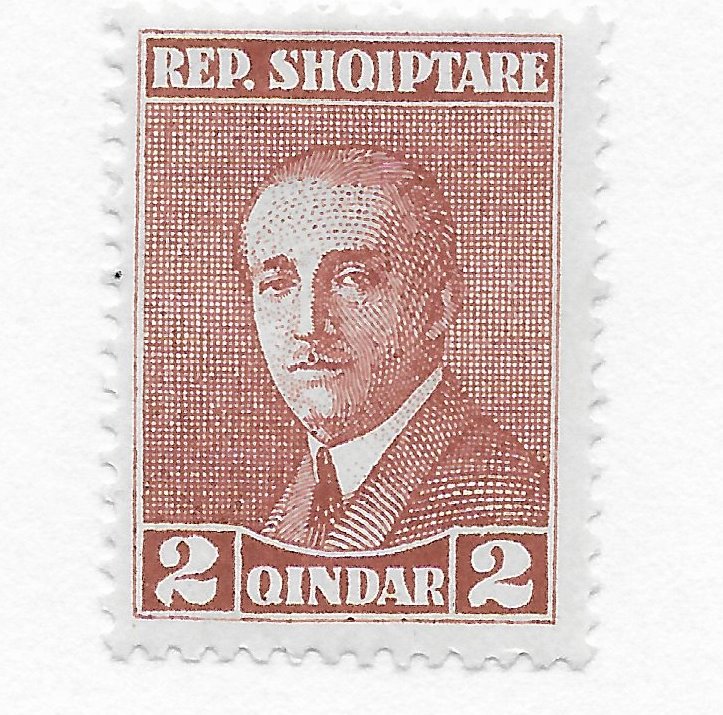 In 1927 his portrait set appeared again with an overprinted wreath of triumph and the letters A Z (Ahmed Zogu) marking his second year as president. 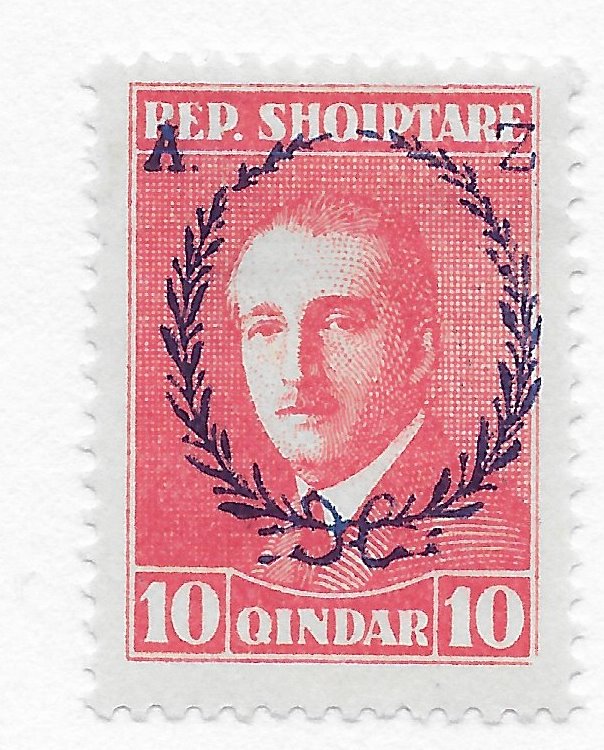 In August 1928 the National Assembly declared Albania a kingdom and President Zogu became King Zog I who then ensured the Assembly voted for its own dissolution.  New stamps featuring the President appeared edged with the overprint Kujtim I Mbledhjes Kushtetuese 25.8.28 (In Memory of the National Assembly 25.8.28.).  They sold at a premium of 25 per cent. 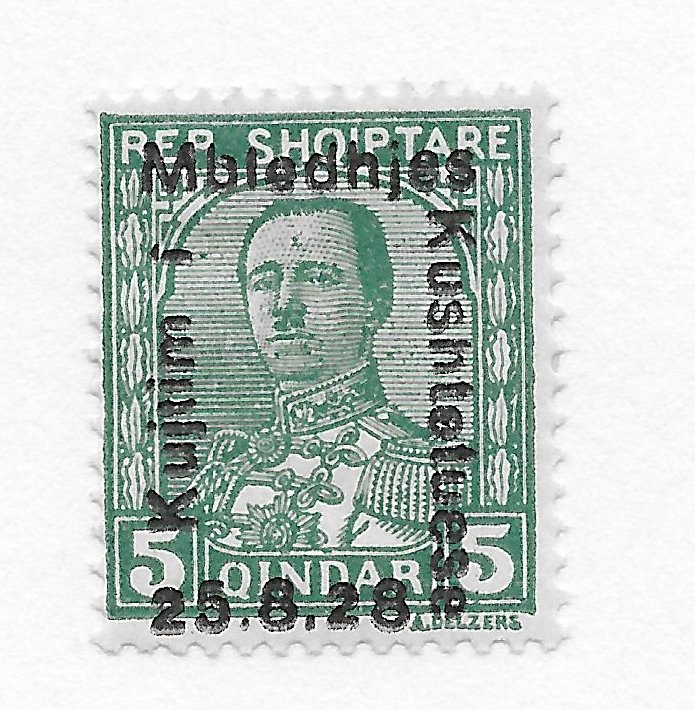 Hard on their heels on 1 September the set appeared again with arched Gothic overprints obliterating REPUBLIKA SHQIPTARE announcing Mbretnia Shqiptare ZOG I 1.IX.1928 (The Kingdom of Albania ZOG I  1. IX 1928). 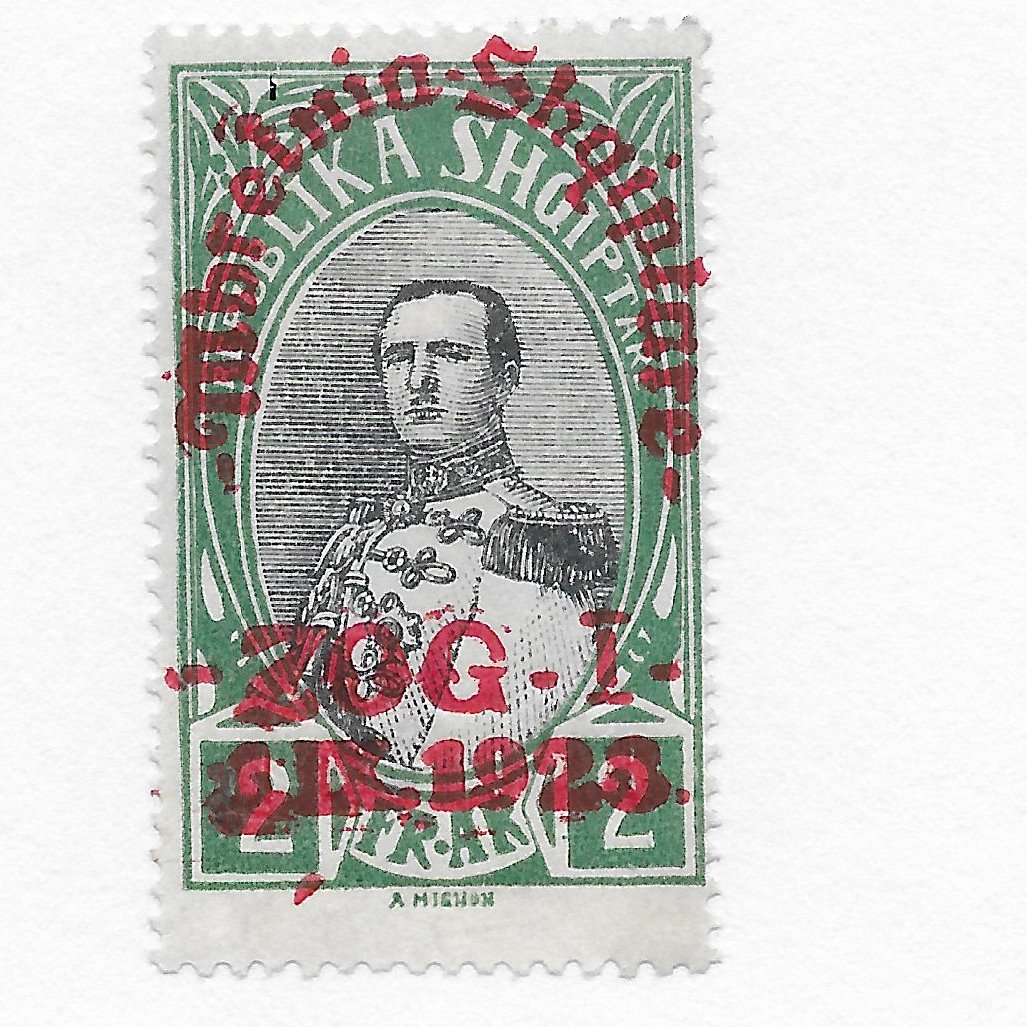 Zog had risen from tribal leader to national monarch, but he had played into Mussolini’s hands and in 1939 he proved powerless against annexation by the Italian dictator. He and his family fled to Greece, and then via Turkey, Romania, Poland, Scandinavia, Belgium and France to Great Britain.  He took much of National Bank’s gold with him.

QUICK LINK: The fraught history of postwar Vilnius and the Polish Republic of Central Lithuania