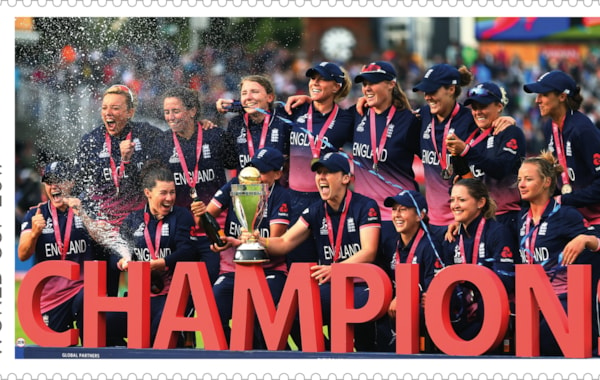 After one of the most dramatic one-day internationals in history, England lifted the ICC Cricket World Cup in front of an ecstatic crowd at Lord’s, prompting Royal Mail to celebrate this, and the earlier women’s team victory, with eight stamps across two miniature sheets.

Although it took Royal Mail well over two months to release the stamps – in which time the England team have experienced the highs, lows and ultimate disappointment of the Ashes series – the mini sheets will no doubt be popular with cricket fans in what has become an important summer for the game.

The final in Lord’s was truly a thrilling occasion, with all manner of twists and turns, and one must feel a little sorry for New Zealand who eventually lost the match on a technicality, since the scores were level even after a ‘super over’, the cricket equivalent of a penalty shoot-out. Broadcast on terrestrial television, the match captured the imagination of thousands and gave cricket a much-needed boost, even if it was the ‘white-ball’ version of the game.

Of course, the women’s team had already won the World Cup in front of their own sell-out crowd at Lord’s back in 2017, and so it seems like somewhat of an after-thought to celebrate the achievement more than two years later.

However, this is the first time both of England’s cricket teams have held the ICC Cricket World Cup trophies simultaneously, and the women’s team certainly deserve the honour; unlike the men’s team who hadn’t won the title before, they have now won the trophy four times.

The men’s miniature sheet comprises four stamps; each capturing a moment of celebration following England’s thrilling World Cup Final victory against New Zealand at Lord’s Cricket Ground. We see the team with the trophy on both 1st class values, and the celebrations after the super over on both £1.60 values, wicket-keeper Joss Buttler captured in a happy but rather unflattering pose on one stamp, Ben Stokes, the hero of the match and of the incredible Test Match at Headingley later in the summer, being congratulated on the other design.

The England women’s sheet also comprises four stamps, each image depicting the celebrations following their victorious World Cup Final against India at Lord’s. Similar to the men’s stamps, we see the team celebrating their victory on two of the designs, in front of a huge ‘CHAMPIONS’ sign and from the balcony of Lord’s famous pavilion, and the on-pitch celebrations on the remaining pair, in the moments after India had been bowled out just nine runs short of their target. The 1st class value shows players around stand-out bowler Anya Shrubsole who got an impressive six wickets during the match.

Visit our Competitions page for your chance to WIN Royal Mail stamps!