Endangered Turtles stamps to be issued on World Turtle Day, 23 May 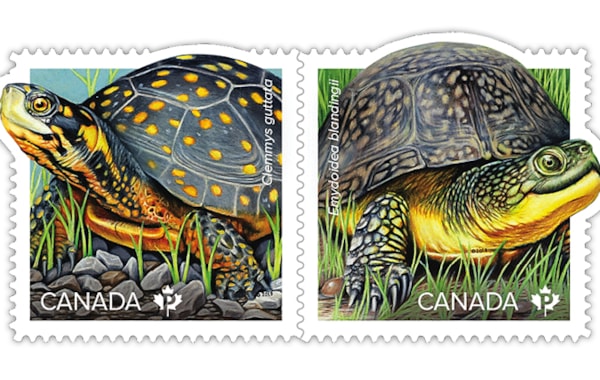 The two stamps, which are Permanent values, feature the Blanding’s turtle (Emydoidea blandingii) and the spotted turtle (Clemmys guttata), both of which have been assessed as endangered by the Committee on the Status of Endangered Wildlife in Canada (COSEWIC).

Canadian populations of Blanding’s turtles are found in Ontario, Quebec and Nova Scotia. This medium-sized turtle is known for the distinctive upward curve of its mouth, giving the appearance of a perpetual smile.

The spotted turtle is named for the yellow-orange spots that dot its shell, neck, head and limbs. In Canada, this semi-aquatic turtle is often found in shallow bogs, ponds, marshes and bays, as well as slow-moving streams in pockets of central and southern Ontario.

One of the province’s smallest turtles, its shell measures less than 13 centimetres in length.

QUICK LINK: Irish stamps celebrate U2 and The Cranberries