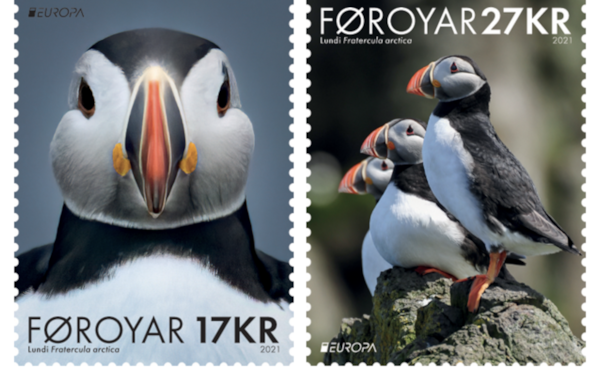 The common theme of this year's Europa stamps is 'Endangered animal and bird species, and two Faroese stamps depict the Puffin.

The puffin with its large colourful beak and orange leg is an iconic bird of the Faroe Islands.

Everyone travelling to the Faroe Islands in summer expects to be able to see it in large numbers, but many will be disappointed, for the stock has declined substantially in the last many decades.

In 2017, the IUCN (International Union for Conservation of Nature) added the puffin to the Red List of endangered bird species.

The capture of puffins is not the main reason why there is only a fraction left of the original puffin population compared to 300 years ago, but it is unforgivable that now in 2021 the puffin is still not completely protected in the Faroe Islands.

It seems that climate change has a major impact on sand eel, which is the puffin’s main food source. Other Faroese bird species such as the manx shearwater, the arctic tern (Sterna and Paradisaea) and the kittiwake (Rissa tridactyla) which are also completely dependent on the sand eel.

Today, it is estimated that there may be 200,000 pairs of puffins left in the Faroe Islands.

The puffin becomes relatively old which means that there will still be some puffins around for a number of years to come, even if the population continues to decline. The oldest known puffin became 41 years old.