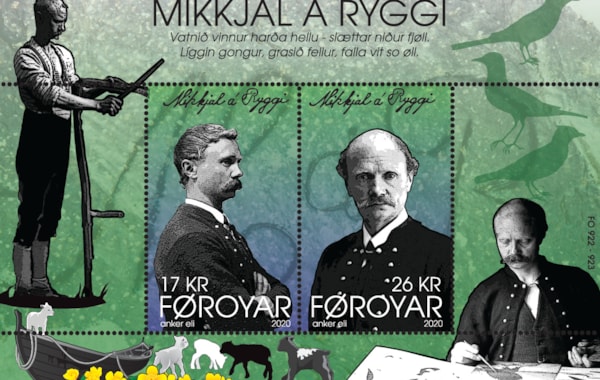 Mikkjal is regarded as the foremost portrayalist of traditional Faroese working life in the early twentieth century.

The motif on the lower left hand side of the stamp sheet, is based on two of Mikkjal’s well-known poems: “Áttamannafarið“ (Boat rown by eight) and 7 “Smálombini Spæla” (Little lambs playing). Mikkjal á Ryggi’s only collection of poems, quite appropriately themed around the seasons, was published in 1954.

In 1945, Mikkjal á Ryggi retired as a teacher in Bøur and Gásadalur. His retirement was marked with tragedy since during that same year he became infected with tuberculosis and had to spend the rest of his life at the Tuberculosis Sanatorium in Hoydalar, outside Tórshavn. It was during this long illness that Mikkjal á Ryggi composed most of his hymns.

In all, 75 original hymns were composed while 40 hymns were translated from other languages.

Mikkjal á Ryggi was one of the proponents of using Faroese textbooks and teaching students in Faroese. However, textbooks in the mother tongue were scarce and he therefore undertook the task of writing textbooks for school children.

On 20 October 1956, Mikkjal á Ryggi died after eleven years of illness. His legacy is a veritable gem-studded string of insights into Faroese culture, nature and working life, and the history of the Faroese Golden Age up until the middle of the twentieth century.

His legacy is a string of insights into Faroese culture, nature and working life.