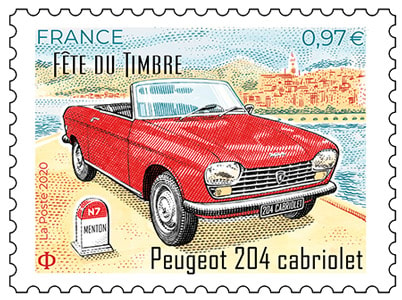 France pay homage to the Peugeot 204 convertible and the Peugeot 404 Sedan with their latest stamps, issued to coincide with the country’s ‘Fete du Timbre’.

Sadly the festival itself, due to be held on 28 and 29 March, was disrupted by the Covid-19 outbreak and the 87 different venues across the country did not host the celebrations after all. At least the stamps are still available and will bring back memories, especially for French motor enthusiasts.

The Peugeot 404 Sedan, as featured on the €1.94 miniature sheet stamp, was the main rival for the Citroën DS during the 1960s, and was the first model of the prolific Peugeot ‘04’ series and the first French model to benefit from a petrol injection engine.

Meanwhile, on the single 97 cent stamp, we see the stylish Peugeot 204 convertible first produced in 1966. According to La Poste: ‘This convertible is the rarest version of the 204 since only 18,181 copies were produced by Chausson establishments between 1966 and 1970.’