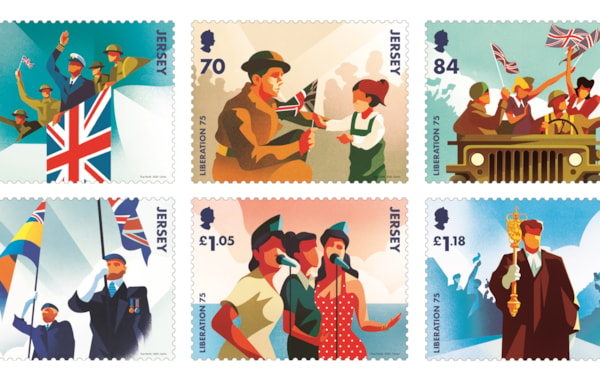 A new set of colourful stamps celebrate Jersey's liberation at the end of the Second World War, after five years of being occupied by German troops.

During the first year of the Second World War, western Europe fell to the forces of Nazi Germany and France was occupied. With their close proximity to the French mainland the Channel Islands were isolated and undefendable.

On 1 July 1940 German troops arrived to take the surrender of Jersey and for the next five years Jersey, Guernsey, Sark and Alderney became the only part of the British Isles to be occupied during the Second World War.

With the final surrender of German forces in Europe on 8 May 1945, the war in Europe came to an end. The next day Royal Navy destroyer HMS Beagle arrived off the coast of Jersey and after accepting the surrender of the occupying forces, two naval officers hoisted the Union Flag at the Pomme d’Or Hotel in St Helier.

There were scenes of joyous celebration as the liberating British troops of Force 135 were welcomed ashore. Five long years of occupation and hardship were over and the people of Jersey were finally able to celebrate their freedom before undertaking the long task of rebuilding their home.

Liberation Day is celebrated each year on 9 May as the Island’s national day and in the years since the end of the war a pattern of official ceremonies has developed, based in and around Liberation Square and the Pomme d’Or Hotel in St Helier.

Six new stamps portray key moments of a contemporary celebration of Liberation Day, focusing on how the event is commemorated today. The Union Flag (54p) is presented at the balcony of the Pomme d’Or Hotel before being raised in a re-enactment of the Liberation that includes the jubilant scenes on the Pomme d’Or’s balcony in 1945.

The 70p stamp features members of Jersey’s own Jersey Field Squadron, The Royal Monmouthshire Royal Engineers (Militia), Territorial Army and many military re-enactors mingle with the crowd. The 84p value shows members of the public dressed in 1940s attire ride through St Helier in a procession of Second World War vintage civilian and military vehicles, waving enthusiastically to the crowds.

Marching with The Band of the Island of Jersey, the Jersey Pipe Band, and the Jersey Scout Band, on the 88p stamp, groups of veterans parade along the route to Liberation Square accompanied by the flag bearers of various service organisations, including the Royal British Legion.

The £1.05 depicts an atmosphere of joyous festivities and food stalls, swing bands and lindy hop dancers, as more informal celebrations get underway, whilst the £1.18 shows the bearer of the Jersey Royal Mace heading from the Royal Square through the streets lined with people to Liberation Square accompanied by the bearer of the Bailiff’s Seal and heads a procession of States Members, clergy, the Bailiff of Jersey, the Lieutenant-Governor and other officials.