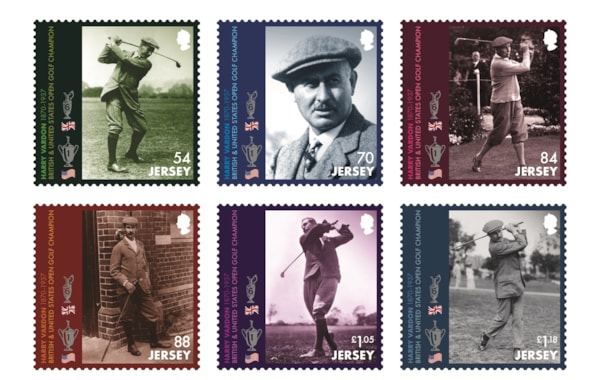 This year marks the 150th birth anniversary of world-renowned golfer, Harry Vardon, and Jersey are celebrating his incredible career with a six-stamp set and a mini sheet also featuring golf legend Ted Ray.

Vardon was born in Jersey on 9 May 1870, the son of a gardener and one of eight children. He became an apprentice gardener at the age of thirteen and started to take an interest in golf when a golf course was built in his parish.

Vardon didn’t receive any professional golf lessons but, in his late teen years, he entered a few golf tournaments. It wasn’t until Vardon saw his younger brother making a career out of the sport that he decided to follow the same path.

Vardon got his first break in the golfing world in the Caddies Competitions run by the Committee Club at the Royal Jersey Golf Club. During his career he won 62 tournaments and with his brilliant reputation, popularised the overlapping grip which is now known as the Vardon grip. This style of grip is still used by golfers around the world today.

Six stamps show photographs of Harry Vardon throughout his career. A Miniature Sheet celebrates Harry Vardon and the golfer Ted Ray, a protégé of Vardon and a fellow Jersey native, who won the US Open Championship 100 years ago this year.