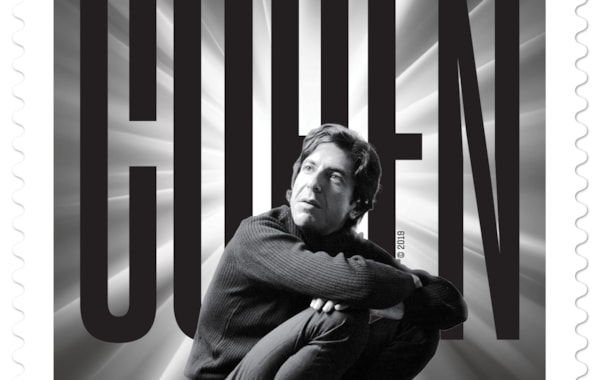 Canada Post have paid homage to the late singer songwriter Leonard Cohen on a set of three stamps issued on what would have been his 85th birthday.

The stamps were unveiled in the city of his birth, Montreal, and feature images highlighting three periods of this accomplished Canadian’s music career; his debut in the 1960s when songs such as ‘Suzanne’ gained popularity; the resurgence of his popularity in the 1980s and the early 1990s, with his unforgettable and oft-covered ‘Hallelujah’ (1984); and his performances on an eighteen-month world tour he undertook in his seventies, followed by a final burst of creative genius.

Robert Kory, Cohen’s manager, estate trustee and friend, said:
‘Leonard was always deeply appreciative of his Canadian heritage, and would have been moved by this honour from Canada Post’.

Jessica McDonald, Chair of the Board of Directors, Canada Post, added:
‘Canada Post is proud to pay tribute to this memorably gifted man whose words and music have touched Canadians and people around the world.’

The Permanent domestic-rate stamps, designed by Paprika of Montréal, with photographs by Jack Robinson, Claude Gassian and Platon, and printed by Lowe Martin, are available in a book of nine, with three of each design. Other collectables, including a four-pack of official First Day Covers, a collectable pane and a folded uncut press sheet packaged in a simulated album cover and liner, are available from www.canadapost.ca/shop