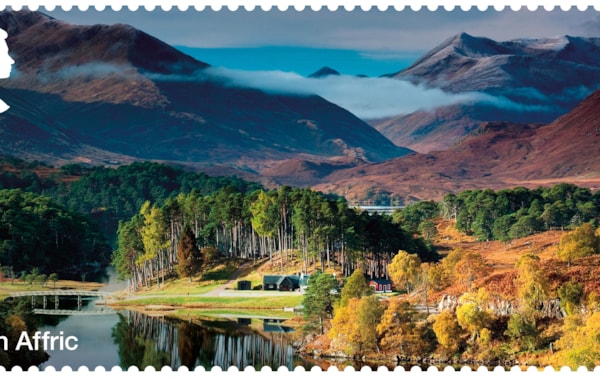 Royal Mail’s summertime stamps focus on six of the country’s forests which between them attract tens of thousands of visitors a year and provide a valuable refuge for some of our most vulnerable plant and animal species.

Our forests have sheltered Neolithic hunters, provided a refuge for outlaws and sport for kings and now, in an age of technology, continue to attract millions of visitors each year. Britain’s forests are part of our folklore, at the heart of centuries-old legends such as Robin Hood sheltering in Sherwood Forest, and part of our everyday language, with phrases such as ‘not out of the woods yet’ and ‘touch wood’.

Between them, the six stamps capture inspirational views from Forestry Commission forests in England, Ireland, Scotland and Wales, celebrating the centenary of the Forestry Commission, set up in 1919 with the aim of increasing the amount of woodland in Britain.

The first stamp (1stclass) shows Glen Affric forest in the Scottish Highlands. Its woodland of pines, birch and oak trees is a perfect example of the Caledonian Forest that in centuries gone by, would have covered most of Scotland. The forest forms part of a protected National Nature Reserve, reflecting its importance as a home for wildlife. The ancient woodland has been part of Scotland’s National Forest Estate since 1951 and since then, non-native trees have been thinned and half a million new trees planted in their place, creating a 17,000 hectare forest that is home to 28 species of mammals and 117 bird species.

Next (also 1st) is The National Arboretum at Westonbirt, near Tetbury in Gloucestershire. This world-renowned forest was created by the Holford family in the 19th-century heyday of plant hunting, and is home to an incredible 15,000 specimens of tree. The 600-acre site has seventeen miles of forest trails with a woodland of medieval origins at its heart.

Stamp three also has strong ties with the Middle Ages – the name Sherwood Forest (£1.55) conjuring up images of Robin Hood sheltering in the woodland with his band of merry men. The stamp shows shafts of sunlight illuminating a track amid the trees, a scene that will have changed little since the end of the Ice Age, when trees first began to grow in this area. Up to a million visitors come to Sherwood each year, many of them eager to see Major Oak, an 800-year-old tree that, according to legend, was the hideout of Robin Hood.

The second £1.55 value shows Coed y Brenin in Snowdonia, north Wales. This 9,000-acre forest is renowned as a place of adventure and is known as a major mountain biking centre, paving the way for a new use of forest land. Recreation is also at the heart of Glenariff Forest Park in Country Antrim, Northern Ireland, where the newly-upgraded Waterfall Walkway is at the heart of the visitor experience. The £1.60 stamp shows part of the walk, which has been popular with visitors for more than eighty years.

Finally (also £1.60), we see a woodland scene from Kielder Forest in Northumberland. England’s largest man-made woodland lies largely within the Border Forest Park. The forest has its origins in the 1920s, when it provided unemployed workers from the mining and shipping communities of the north east with forestry work. Nowadays, the forest is home to fifty percent of the country’s red squirrel population and because of its remoteness, is being considered as a site for the possible re-introduction of the Iberian Lynx.

QUICK LINK: Enter our competition for your chance to win the stamps