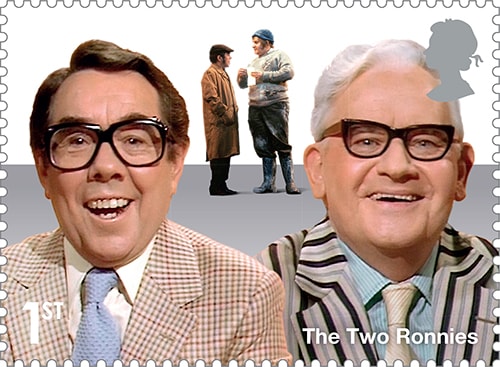 Who said stamp collecting was no laughing matter? Ten top comedy talents bring some joviality to British stamps in this celebration of six decades of comic genius, appropriately issued on April Fool’s Day

One of the key traits used to describe Britons around the world is our sense of the ridiculous, with the British sense of humour recognised as being particularly distinctive.

In this special issue dedicated to comedy greats, Royal Mail takes a trip into Britain’s comedy past with a look at the story behind ten of the country’s best loved humorous acts.

The timing of Comedy Greats (with its release on April Fool’s Day) is particularly apt, as this year marks the centenary of the birth of Norman Wisdom and the fiftieth anniversary of the first broadcast of Not Only… But Also starring Peter Cook and Dudley Moore.

Each of the stamps features the comedian, or comedy pair, in a close up photograph, with an extra photo of the featured person taken during one of their performances.

The performance photos show the comedic greats in trademark poses, from Morecambe and Wise performing one of their humorous ‘Bring Me Sunshine’ dance, to Victoria Wood seated at a piano during a comedy song routine.