A lion and an angel: France's wartime pride In his latest expert blog, Dr David Parker shares his research on World War I stamps that exemplify France's national pride during a time of great loss.

In the summer of 1917 the war was going badly for France.  For much of 1916 the heroic defence of the massive fortresses surrounding Verdun against repeated German attacks had cost around 370,000 casualties, of whom 162,000 had died.

Holding on to Verdun had become a matter of French pride, but the loss of lives haunted the nation for decades afterwards.  And elsewhere that year – at Albert, Fromelles, Pozieres, Delvile Wood, Morval, Thiepal Ridge and the Ancre River – another 200,000 casualties had occurred in battles along the Western Front.

Then, in early 1917, General Robert Nivelle planned a vast Allied assault involving a million French soldiers along a front stretching from Royle to Reims. He asserted a ‘creeping barrage’ whereby an advancing succession of artillery bombardments followed up by infantry consolidating each advance would win the day and, he hoped, the war.

In the event confusion reigned.  Initial Allied advances were checked by German counter-attacks and for the next three weeks as April turned into May a host of local engagements ended in stalemate, and 350,000 casualties, 187,000 of them French.  The almost incomprehensible slaughter, and an understandable conviction that commanders thought nothing of ordinary soldiers’ conditions and sacrifice, incited a series of French mutinies.  A combination of  arrests, imprisonments and 49 executions and promises of longer rest breaks and leave broke the mutinies but they represented the air of despondency and exhaustion pervading France.

In August 1917 France issued a poignant set of stamps to raise much-needed funds for war widows.  One pictured a cloaked female figure holding flowers by graves, another a woman taking charge of a team of horses ploughing a field, and a third the French flag flying over an empty wartime trench.  Although the pictures acknowledged the national suffering an aura of pessimism and futility hung over them. A fourth design pictured the Spirit of War – a cloaked flying warrior with a winged helmet and outstretched sword.  It could easily have been seen as a fearful omen of death rather than any inspiration to continue the war. 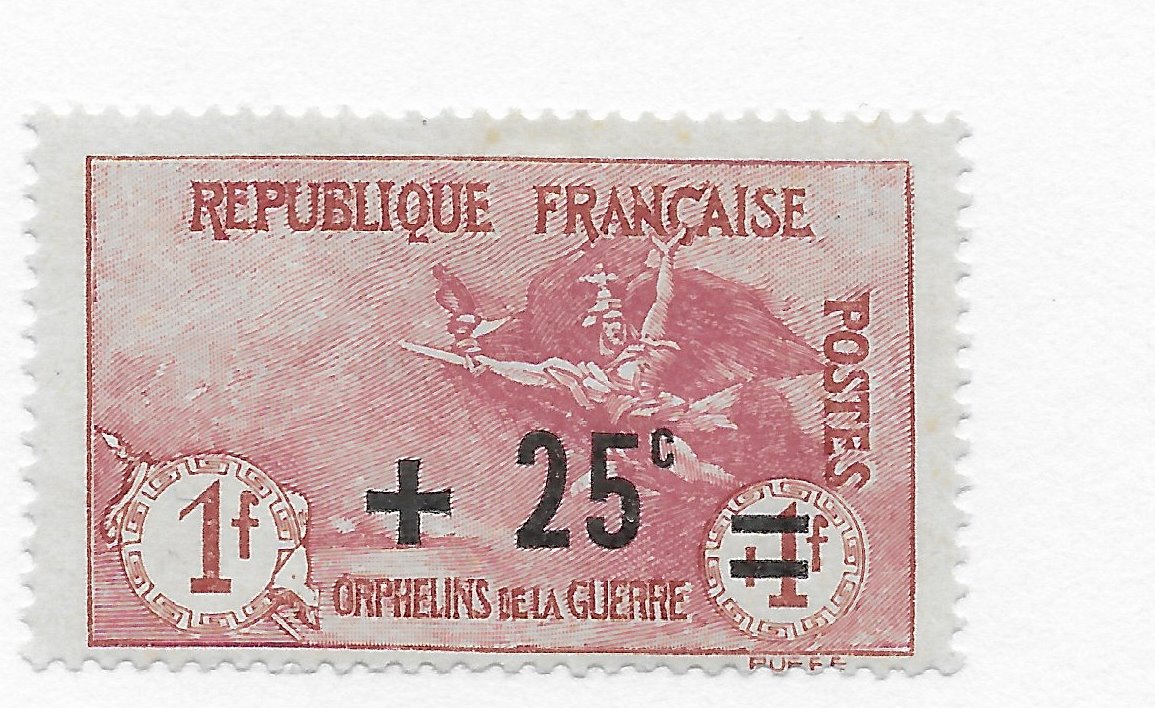 One further stamp, however, harked back to a moment of national military pride in the otherwise humiliating war of 1870-71 when Prussia’s armies soundly defeated those of France under the Emperor Napoleon III.   Whether the people of France appreciated the gesture of defiance in a war that ended in total defeat and the Prussians marching through Paris is another matter, but perhaps the calculation was that recalling that heroic moment would strengthen French resolve to avoid another German triumph.  The stamp featured the celebrated Lion of Belfort in Alsace. 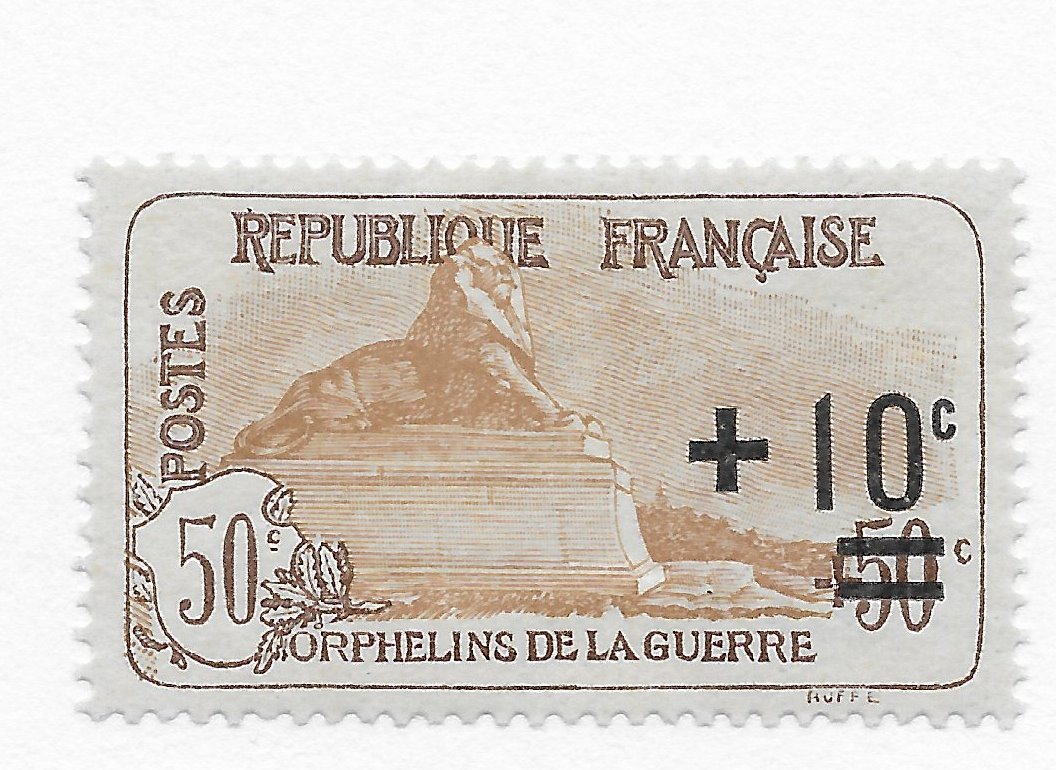 The city of Belfort is in a gap between the southern Vosges mountains and the Jura Massif, and its massive fortress guarded this important route into central France.  After the Prussians took the French fortress city of Strasbourg in September 1870 they marched on Belfort.

Forewarned, its commander, Colonel Pierre Denfert-Rochereau, constructed further outlying fortifications and the Prussians were obliged to launch a siege rather than an outright assault.  Determined French resistance combined with lightning strikes on German units kept Belfort secure, even though a French relief force was heavily defeated.

In February 1871, after defeats at Sedan and Metz France signed an armistice with Germany that amounted to surrender.  However Denfert-Rochereau ensured he and his garrison marched freely out of Belfort with their weapons – and honour – intact.  During 103 days 17,000 Frenchmen, of whom just 3,500 were servicemen, had protected the city from 40,000 Prussians.  Although under the ensuing peace treaty France had to cede Alsace and Lorraine to the new German Empire, Belfort and its surrounding area was permitted to stay French.

The 'lion of Belfort'

The story spread that the Germans granted this voluntarily as a mark of respect, but the French had argued hard for its retention and geographically this southern tip of Alsace did not matter much to the Germans who could create a much better line of fortifications a little further north.  However Denfert-Rochereau became a national hero, known as the ‘Lion of Belfort.’

He died in 1878, and in 1880 the nomenclature was transferred to a massive lion 22 metres long and 11 metres high carved from sandstone blocks and heaved into a prominent position just below Belfort Castle.   Originally it was to face Germany, but German protests obliged it to look the other way.  The sculptor was Frederic Bartholdi who also created the Statue of Liberty.   The set, together with a 1919 addition featuring two orphans, was re-issued in 1922 overprinted with lower charity premiums, and the Lion of Belfort and war widow pair were reprinted in 1926.

In 1930 a second statue with powerful wartime associations appeared on a stamp.   It was part of a series of annual surcharged stamps that started in 1927 in support of the government’s Sinking Fund.   It featured the famous smiling angel of Reims Cathedral. 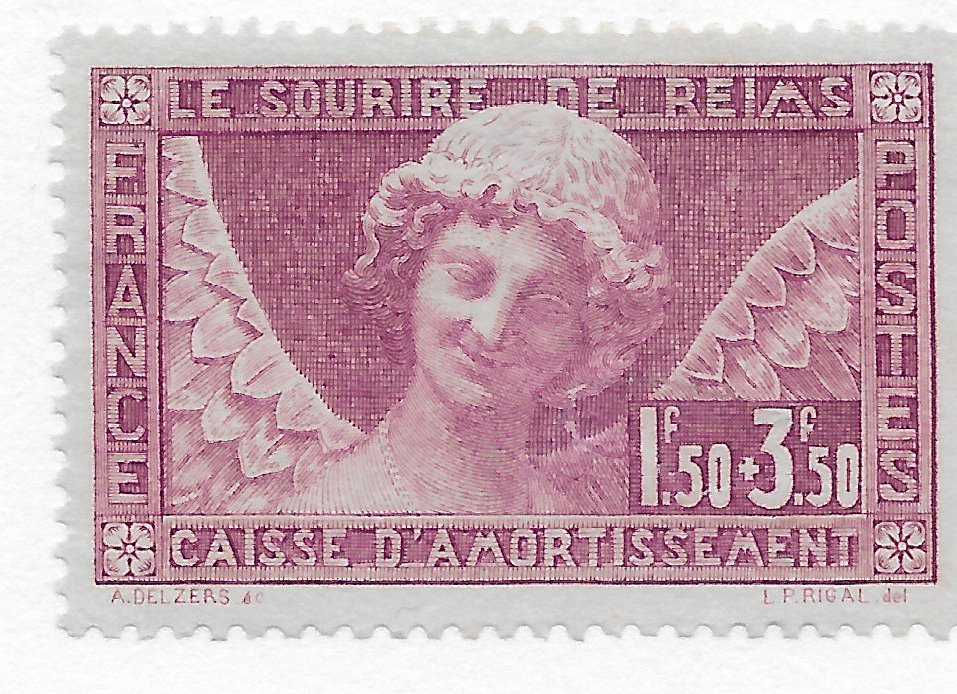 Carved in the middle of the thirteenth century, its head was shattered by a German shell in September 1914.   The cathedral was badly damaged by fire, and the damaged statue became a wartime icon symbolizing French culture and German barbarity.   Pieces from the beheaded angel were salvaged and preserved, allowing a new head to be molded when the statue was carefully restored in 1926.

In the late 1920s France was deep in debt, and inflation was high – the ordinary internal postage rate had risen from 10 cents in 1917 to 50c in 1926.  The country had borrowed heavily to finance the war and then undertaken massive restoration projects.  It owed the USA four billion dollars.  Much of occupied France had been devastated and the retreating Germans had destroyed most industrial plants they had not already transported back to Germany.

France demanded 70% of the reparations Germany was obliged to pay the Allies, and asserted that war damages should take priority over Great Britain’s claims to the actual costs of fighting the war.  In the end Germany was saddled with a bill of 132 billion gold marks, of which 52% would go to France, 28% to Britain and the rest to Belgium, Italy and Serbia.   In the event Germany paid only about 22 billion gold marks and then only after long delays while its economy recovered.

In desperation, in 1926 France’s Sinking Fund attempted to accumulate funds to set aside to repay debts.  To assist this a series of surcharged stamps was issued between 1927 and 1931. In common with all special stamps they were carefully designed to attract collectors in addition to well-wishers of the fund. However the multiplicity of issues, the high surcharges, and the lack of appeal of the Sinking Fund itself accounted for the poor sales overall.