This year’s Olympics won’t be quite the same as usual, but there will still be all the drama, heroics, and victories that make the event so special. There are plenty of new stamps too, with countries around the world celebrating the Tokyo Olympics and their involvement.

Stamps issued for the Tokyo Olympics

Australia Post have issued a specially designed stamp ahead of the Tokyo Olympics and plans to honour every Australian gold medallist of the 32nd Olympic Games in an instant stamp program.

The ‘Ticket to Tokyo’ stamp shows four interlocking abstract figures representing the spirit of the Olympic Games, while the Australian Gold Medallist instant stamps will depict each winning athlete at their medal ceremony and will be released as sheetlets within 72 hours of the medal presentations.

"Australia Post takes great pride in celebrating the Olympic Games in this way and we look forward to honouring our great Olympians with our instant stamp program while the Games are underway." 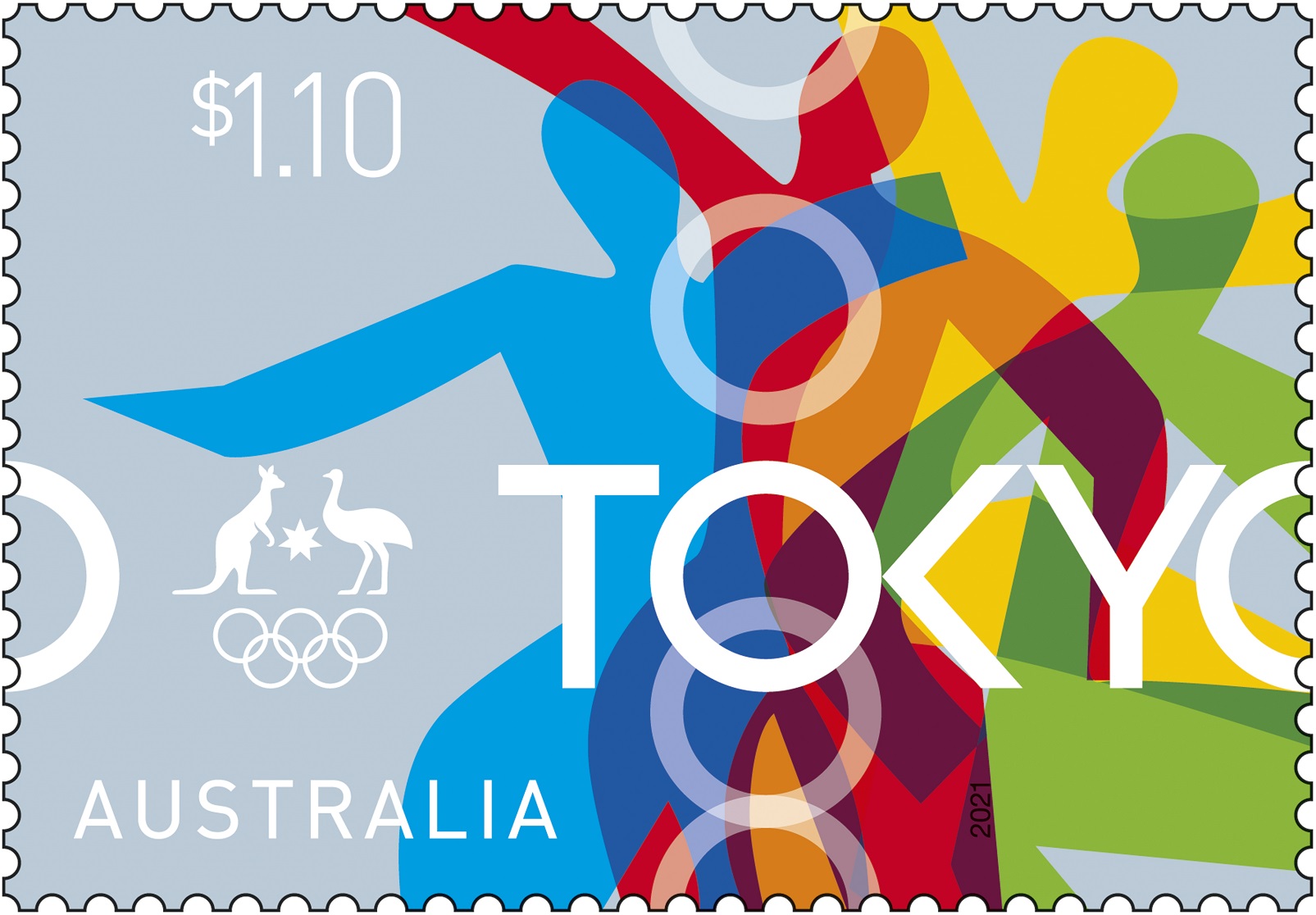 The Principality of Monaco will send competitors to the Olympics in eight disciplines:

…and the Office des Timbres de Monaco issued a stamp ahead of Tokyo featuring all of these sports. 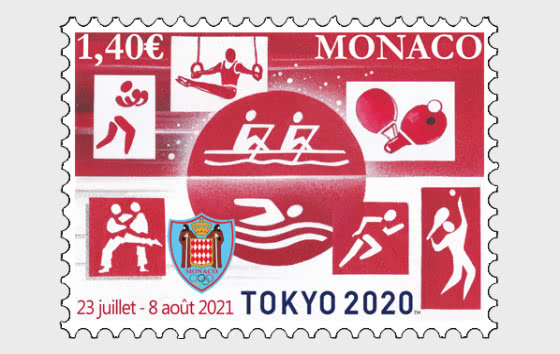 Keiko Yamano painted the two motifs showing Synchronised Swimming (on the CHF 1.70 value) and Judo (CHF 2.80) in acrylic. The artist produces most of her works in oil using traditional Japanese colours, but she also masters the art of calligraphy. She mainly shows her works at exhibitions in her home city of Tokyo. 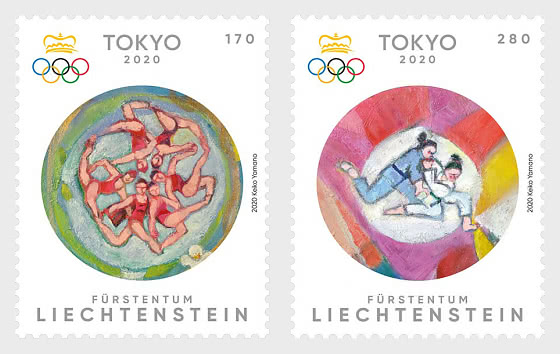 Like many of the stamps for the event, the stamp shows the years 2020 and 2021, a subtle reminder of the global tragedy that prompted the postponement of the Tokyo Games. 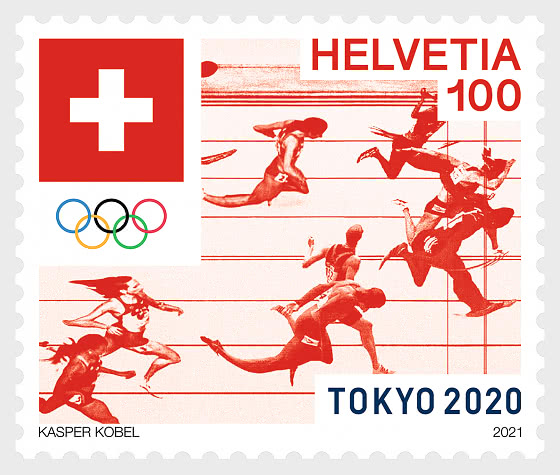 Both Slovakia and Estonia have gone for a similarly dramatic graphic representation of the sports, with a relay runner and a javelin thrower, respectively, whilst Armenia's stamp shows a runner carrying the Olympic torch. 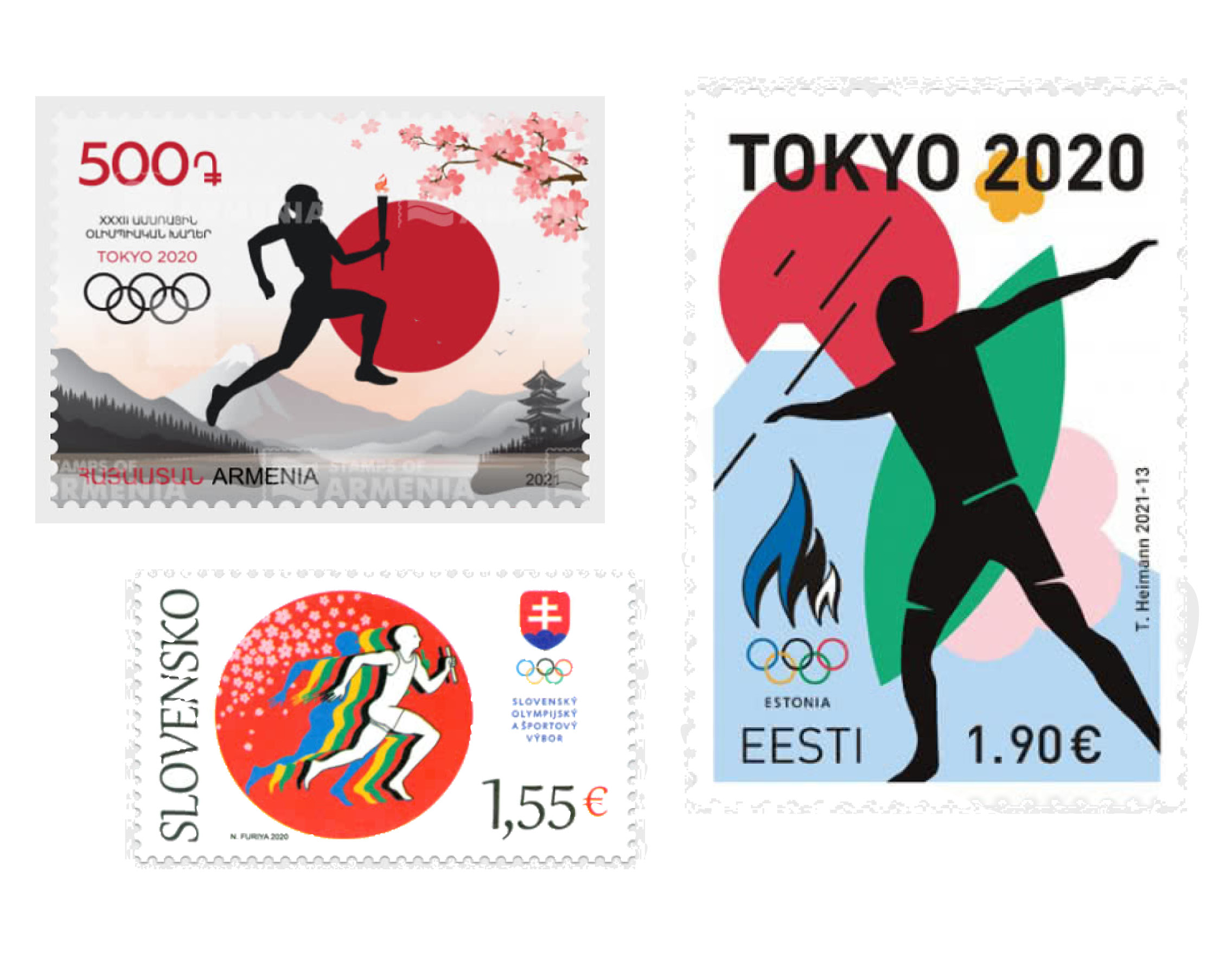 Whilst many designs focus on athletics, there are a host of other sports for us to enjoy, and Hungary's one-stamp miniature sheet shows swimming with 'iconic Japanese buildings' depicted in the background. The stamp also shows the new logo of the Hungarian Olympic team, MAGYAROCK, which was introduced in 2020. 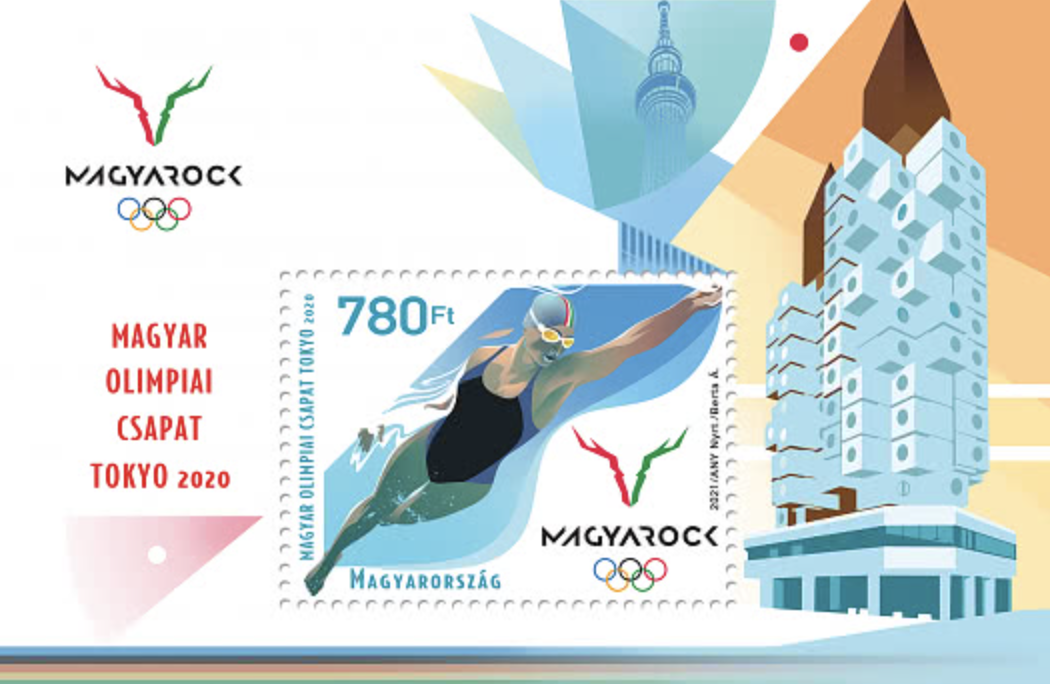 Likewise, Israel celebrate swimming too, on one of three stamps. The two others show rhythmic gymnastics, and equestrian, and as is customary on Israeli values, the stamps feature a label at the bottom. 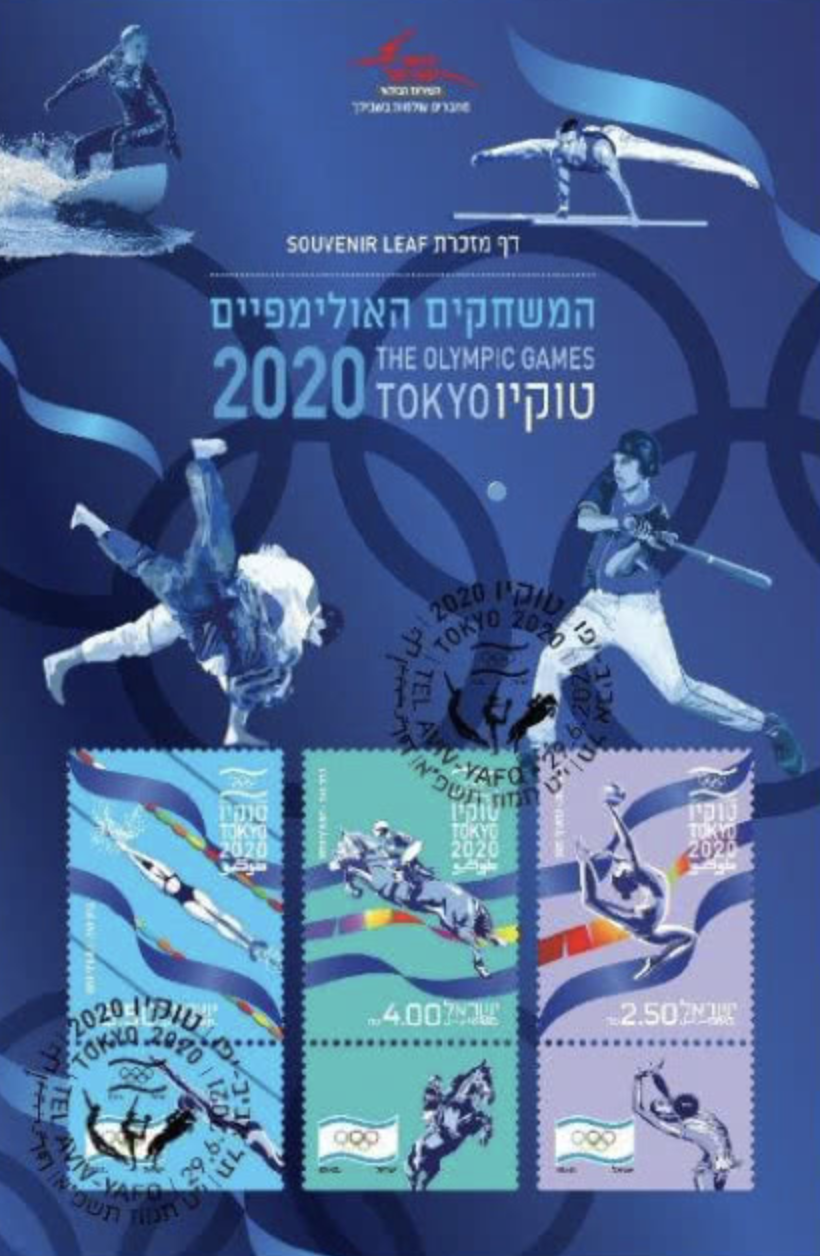 Germany's three stamps, issued in 2020, present the three new sports being introduced to the Olympics this year: surfing, baseball and softball. 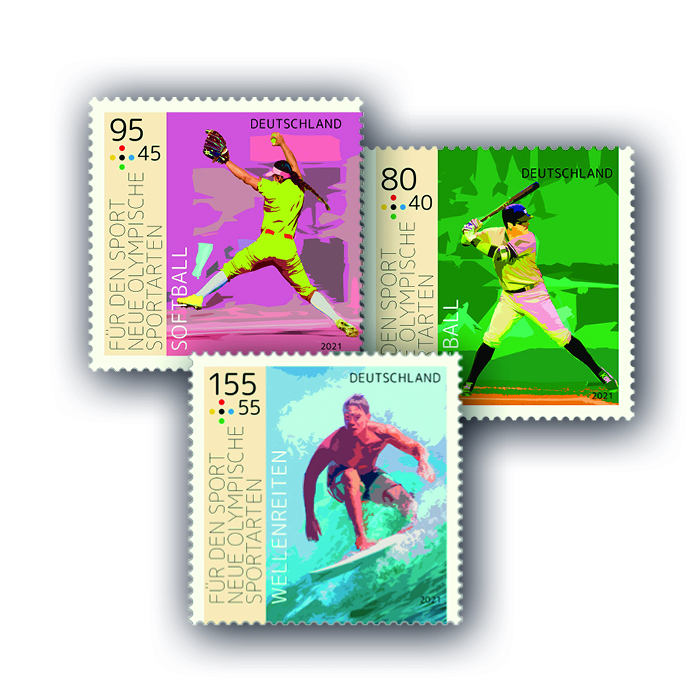 Finally, we can't forget the host country itself. Japan's hosting of the Games has been difficult to say the least – before the event even took place – and with no spectators allowed to attend the event, it's going to be a little different for everyone involved this time around. Still, Japan Post are celebrating Tokyo 2020 with a wide range of stamps.

Japan's first Tokyo 2020 stamps were issued in March 2019 and featured images of Olympic and Paralympic mascots Miraitowa and Someity as well as an image of the new Olympic Stadium.

In June 2021 a series of commemorative stamp sheets were issued, featuring a stamp for fifty Olympic and 23 Paralympic sports – that's 73 new stamps to collect, ensuring we collectors will be kept busy long after the closing ceremony has come to an end. 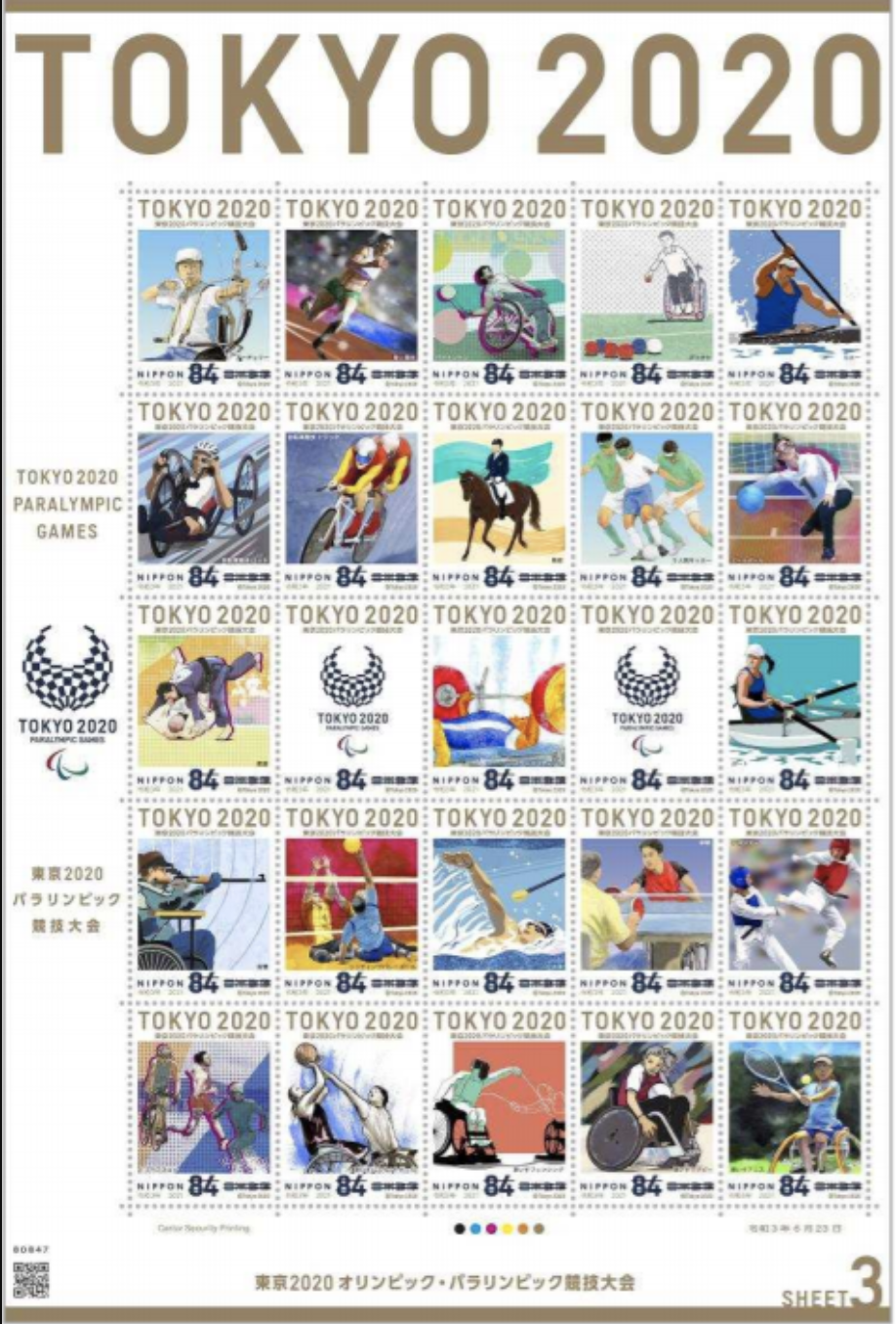