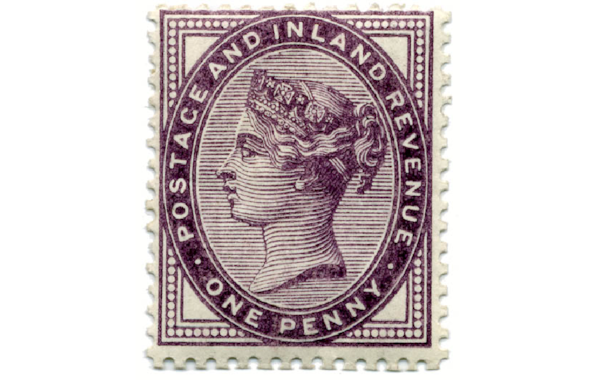 The Penny Lilac was the veritable Perforate Hercules of the late-Victorian postal system, toiling for almost twenty years, during which nearly forty billion were issued and used on the tidal waves of correspondence that washed across Britain several times a day in those literate decades when almost everyone over the age of eight could read, write and lick a stamp.

The oval design of the frame around the monarch’s profile might have struck the eye as much as the colour alteration from the penny stamp it replaced. During the previous forty years the Penny Black, Penny Red and Penny Venetian Red had each favoured a rectangular frame. Almost as eye-catching was the lettering, altered from the traditional POSTAGE to the newfangled POSTAGE AND INLAND REVENUE. Those three new attributes – the colour, framing and lettering – qualify this as a rather special stamp.

The oval frame provides a clue to the reason for this issue: it was an adaptation from the design used, from the early 1860s, for Great Britain’s revenue stamps.

The Customs & Revenue Act of 1881 called for a single stamp that could be used for both postal and fiscal use. This was achieved by incorporating the words POSTAGE AND INLAND REVENUE in the design of the new stamp. The printers, De La Rue, used a double-fugitive ink to prevent the removal of both postmarks and handwritten fiscal markings, neither of which could be achieved without altering the colour of the stamp.

Several ... and all interesting.

Colour shades ... plus a brief period when Messrs Pears’ Soap placed advertising on the stamp’s reverse ... plus a number of printing accidents that resulted in stamps with the design joining the reverse gum ... add to the fascinations of what was Britain’s most prolifically issued Victorian stamp. Penny Lilac stamps are often found as perfins, with initials or emblems added as perforations to mint stamps to prevent theft.