Five stamps on a lighthouse theme 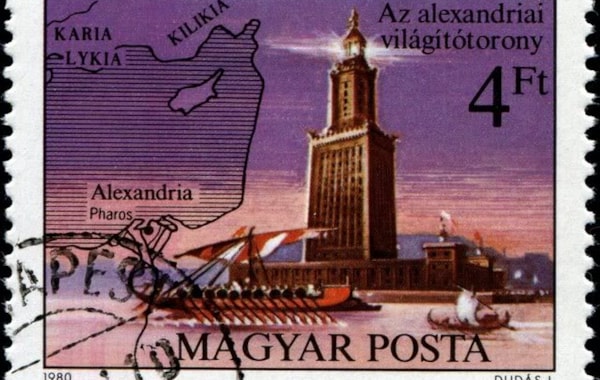 Give your stamp collection a maritime flavour with our pick of five top lighthouse themed stamps.

1. The world’s earliest known lighthouse, Pharos in Egypt, has appeared on several stamps over the years, including this 1980s Hungary stamp showing the ancient lighthouse towering over the port of Pharos.

2. Royal Mail’s 1998 Lighthouses five-stamp set featured paintings of, and navigation points for, five British lighthouses, including Bell Rock off the coast at Arbroath in Scotland. Bell Rock was the creation of lighthouse engineer Robert Stevenson who built sixteen lighthouses around the UK.

3. This unusual stamp from Australia was issued in 1968 to mark the 150th anniversary of the Macquarie Lighthouse. It features an artist’s drawing of a cutaway of the lighthouse building, complete with a spiral staircase running up the middle of the tower.

4. In 1991, Alderney told the story of lighthouse technology on this Channel island using four stamps to illustrate this history, including a modern-day helicopter rescue from Casquets, shown on this 31p stamp.

5. In 1972, Royal Mail celebrated 150 years of HM Coastguard with a stamp showing a mariner at Hartland Point, and a stylized lighthouse in the background.

Don’t miss the in-depth guide to collecting lighthouses on stamps in the February issue of Stamp & Coin Mart.