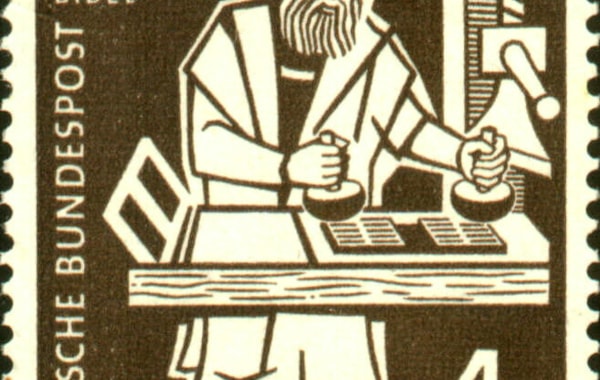 Explore the history of communications, from cave paintings through to glossy magazines, with our guide to creating a thematic on the subject of books and printing.

The earliest forms of written communication

One of the oldest forms of written communication is prehistoric cave paintings, where our ancient ancestors drew images of people, animals and the skies, using this imagery to record events such as changes in the weather, natural disasters and the cycle of the year. Europe is home to some of the oldest such paintings in the world and in 1968, France paid tribute to the celebrated 17,000-year-old Lascaux Cave Paintings in south-western France, with an engraved stamp showing an animal image from the paintings.

These early cave paintings were a move away from relying entirely on the oral tradition to communicate information and pass on a community’s rules and values. The next significant step came with the use of clay tablets and then papyrus in Ancient Egypt, where a hardened reed was used as a stylus, allowing scribes to keep records and the royal dynasty to celebrate its military and civic achievements.

In 1973, Iran issued a stamp featuring the Proclamation of Cyrus the Great, which dates to 538 BCE and was inscribed onto a clay tablet. The charter, promoting respect for humanity, has been cited as one of the world’s oldest charters of human rights. Austria’s 1968 ‘history of writing’ stamps also include a stamp dedicated to clay tablet communication.

The word ‘paper’ is derived from ‘papyrus’ and this was the Ancient Egyptian method of using portable scrolls to record events. By the fourth century, parchment made from animal skins had replaced papyrus.  This would be the material used to print the first books. A 1989 ‘production of early manuscripts’ five-stamp set from Ethiopia depicts the process.

Although many of us are familiar with the first printing technology reaching Europe in the 15th century, the oldest surviving example of this method of communication dates to before AD220 in China; a three-colour printing of flowers reproduced onto a piece of silk. Once the technology reached Europe via international traders, it would be just a few years before the printing press came into widespread use, allowing large numbers of people to read the same book. In 1973, Belgium produced an attractive printing stamp showing workers at a printing press, with a board of letters beside them, and printed papers hung up to dry.

German silversmith Johannes Gutenberg (1398-1468) was the first person to use moveable type printing in Europe and within a decade or two of his invention, cities across the continent had their own printing presses, and books were in widespread production. Gutenberg has been well represented on stamps over the years, most notably in 1952 when the USA marked the 500th anniversary of the printing of his Bible, with another 1954 German stamp on the same subject.

In the centuries that followed Gutenberg’s invention, printing techniques became more efficient, with inventions including lithography, screen printing, photocopying and laser printing. Here, collectors can look out for stamps featuring various writing-inventions including the typewriter and the computer. Italy’s 2009 postal tribute to journalist Indro Monatelli on the centenary of his birth shows the writer reading through a newspaper with a typewriter in the foreground.  In 1993, Austria honoured Peter Mitterhorer, inventor of the typewriter, with a stamp showing his invention.

Computers and digital technology on stamps brings the story of communications up to date and there are plenty to choose from, notably Sri Lanka’s 2010 World Post Day stamp showing an e-mail in space, above Planet Earth, and a GB 63p value of 1999 (part of the Inventor’s Tale issue), showing a computer inside a human head, celebrating Alan Turing’s work on computers.

Anniversaries tied to the theme offer a good chance to obtain attractive additions to this thematic: possibilities include stamps issued in 1960 for the 350th anniversary of the King James translation of the Bible, 1972 Year of the Book stamps and 1968 stamps for the 500th death anniversary of Gutenberg.

There are also many possibilities for sub themes, including stamps featuring the Bible and other holy books such as the Koran, people associated with the history of books such as Gutenberg, Louis Braille and Jean-Francois Champollion (who deciphered hieroglyphics)and illuminated medieval manuscripts.

For more information or to join, visit the website.