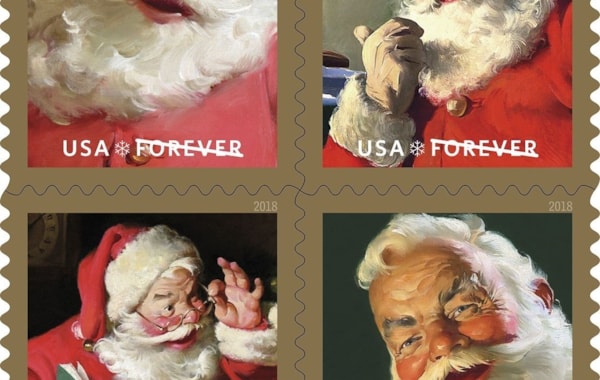 The countdown to Christmas has begun and postal authorities around the world are revealing their seasonal stamps, as our festive guide reveals.

You can see Great Britain’s snowy stamps here, and many other countries have also revealed designs for what is the busiest time of the year for post offices and delivery companies.

The USA are celebrating Saint Nick himself on a set of four, featuring classic images of Santa Claus painted by commercial artist Haddon Sundblom, who is credited with ‘refining the modern image of Santa Claus’.

The four images on the US stamps were originally published in adverts for The Coca-Cola Company from the 1940s through the early 1960s. The USA have also issued a new Madonna and Child by Bachiacca single stamp.

An additional stamp features a modern-looking image of the Nativity. As part of the issue Canada Post are offering collectors a limited edition uncut production press sheet that features multiple booklets from this issue, along with booklets of the 2018 sacred Christmas stamp.

‘Unlike uncut press sheets specifically designed as collectables, the production press sheet is made up of actual booklets before they’re cut for sale. This Canada Post first is sure to make the season very merry and bright for collectors.’

Finland have issued four festive designs. An international stamp shows a pair of ice skates complete with colourful (and warm) socks; snowy berries and cozy candles are seen on two domestic stamp, respectively, and a Christmas stamp shows a red bauble on the branch of a Christmas tree.